Pope: Be Grateful to Your Parents, Never Insult Them 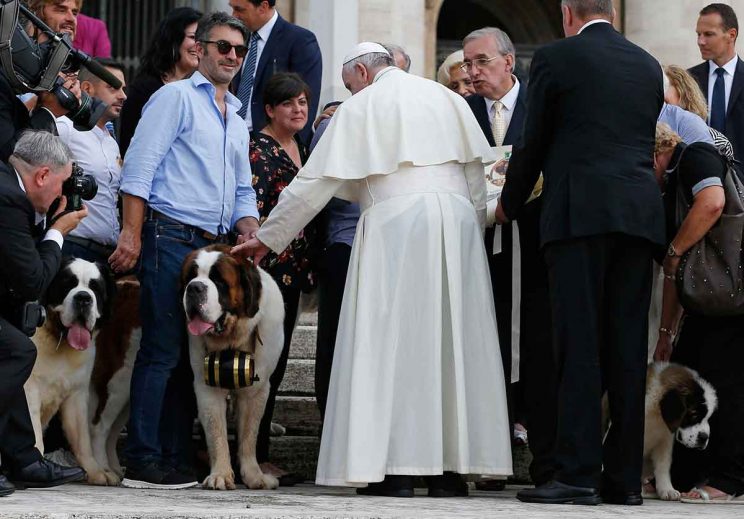 Pope Francis touches a Saint Bernard during his general audience in St Peter’s Square at the Vatican. (CNS photo/Paul Haring)

Honouring mothers and fathers means being grateful for the gift of life and Christians should never insult anyone’s parents, Pope Francis said.

“Make this decision: from today forward, ‘I will never insult someone’s mom or dad.’ They gave life! They should not be insulted,” he told those gathered in St. Peter’s Square.

Gray clouds forming above the square did little to dampen the spirits of thousands of pilgrims who cheered as they waited for the pope to pass by in his popemobile.

As customary, the pope greeted them, blessed religious articles and kissed children who were brought up to him.

During the general audience, the pope continued his series of talks on the Ten Commandments and reflected on the obligation to “honour your father and your mother, that your days may be long in the land that the Lord your God is giving you.”

To love and respect one’s father and mother, he said, means “recognising their importance with concrete actions that express dedication, affection and care.”

“Honour your parents: they gave us life. If you have distanced yourself  from your parents, make an effort and return, go back to them, perhaps they are old. They gave you life,” the pope said.

Pope Francis explained that the promise of a long life that comes from honouring one’s parents associates happiness with one’s relationship with them.

“This centuries-old wisdom declares what human science has only been able to elaborate upon a little over a century ago: that the imprint of childhood marks a person’s life,” he said.

However, this commandment does not require mothers and fathers to be perfect and regardless of the merits of one’s parents, “all children can be happy because the achievement of a full and happy life depends on the proper gratitude to those who have brought us into the world.”

The pope recalled the example of saints who despite being orphaned or having lived through painful childhoods grew up to “live virtuous lives because, thanks to Jesus Christ, they reconciled with their life.”

Recalling the life of Blessed Nunzio Sulprizio, who will be canonised alongside Blesseds Paul VI and Oscar Romero Oct. 14, the pope said that although Blessed Sulprizio lost his mother and father when he was very young, he “reconciled with so much pain” and never betrayed his parents.

“We should also think of St. Camillus de Lellis, who, out of a dysfunctional childhood, built a life of love and service; St. Josephine Bakhita, who grew up in horrible slavery; or Blessed Carlo Gnocchi, orphaned and poor; and even St. John Paul II, who was impacted by the death of his mother at a tender age,” he added.

In the light of love, Pope Francis said, sad and painful experiences “can become for others a source of well-being.”

Thus, he said “we can begin to honour our parents with the freedom of adult children and with merciful acceptance of their limitations.” By Junno Arocho Esteves Catholic News Service