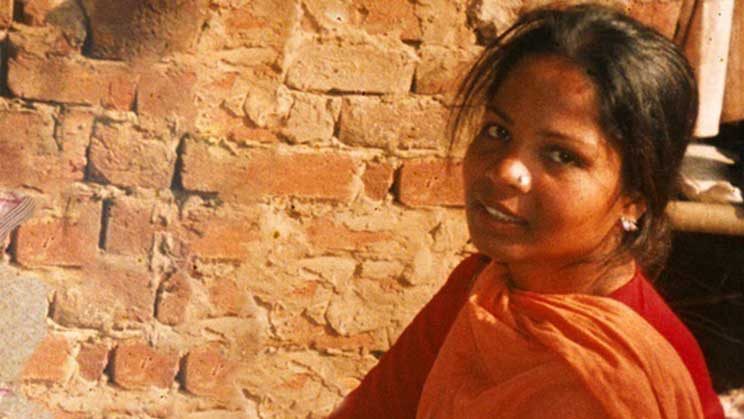 Catholic Asia Bibi has been held in solitary confinement in Pakistan since November 2010, when she was sentenced to hang for insulting Muhammad, the founder of Islam.

Ashiq Masih, her husband, said that if Bibi is released she and her family will immediately seek sanctuary in one of several countries that have offered them exile, because it was too dangerous for them to remain in Pakistan.

Mr Masih, a builder from Sheikhupura, Pakistan, was in England with his and Bibi’s youngest daughter, Eisham Ashiq, 18, as guests of Aid to the Church in Need, a Catholic charity helping persecuted Christians.

They said when they visited Bibi in Multan prison, this month, that she was in good health, contrary to speculation that she was developing dementia.

Mr Masih said Bibi was praying constantly and that she deeply believed she would win her freedom.

“She is psychologically, physically and spiritually strong,” Mr Masih said. “Having a very strong faith, she is ready and willing to die for Christ. She will never convert to Islam.

“She also wanted to deliver a message to the international community that they must remember her in their prayers. She is spending her life praying with a very strong faith and is reading the Bible every day. She feels when she is praying, Jesus is encouraging and supporting her,” he continued, adding that she also received Communion in jail.

In June 2009, Bibi, who worked as a farmhand, was accused of blasphemy against Islam after Muslim women objected to her drinking from a common water supply.

Bibi was sentenced to death for violating Section 295C of the Pakistan penal code, which makes insulting Muhammad a capital offence.

No one has been executed under the law so far, but Christians who are falsely accused often are lynched or spend many years in prison.

A special bench of the Supreme Court, sitting in Islamabad, reached a verdict, but publication has been deferred until an unspecified date, amid fears of riots.

If the court has upheld the execution order, the only option open to her lawyers will be a direct appeal for clemency to President Imran Khan.

Bibi’s case has divided Pakistan, with millions of Islamic militants reportedly willing to kill her to obtain a reward of 500,000 rupees offered by a Muslim cleric for her murder; some moderate Muslims have called for her release — resulting in the murder of a governor and government minister who called for her release.— By Simon Caldwell, CNS