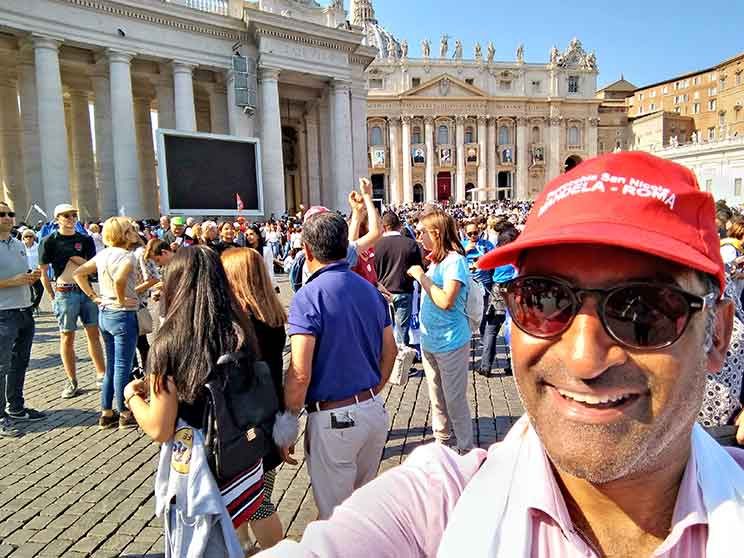 Raymond Perrier, director of the Denis Hurley Centre in Durban, at the canonisation with a cap from Rome’s Mandela parish.

When Pope Francis canonised Archbishop Oscar Romero, Pope Paul VI and five others this month, Raymond Perrier was there. Here he reflects on that experience.

The meaning of Catholic is of course “universal”. It is the duty of every Catholic parish to express a sense of being universal — open to all regardless of colour, language or nationality.

But the universality of the Church is never more obviously felt than in Rome.

I was reflecting on this as I waited outside St Peter’s Square for the Mass of the canonisation of Archbishop Oscar Romero, Pope Paul VI and others.

I spent three hours standing in a queue that was going nowhere — seemingly the security guards had forgotten about our side of the square! But that gave me plenty of time to chat to all the people around me.

And we came from all corners of the globe: seminarians from Britain and Uganda, nuns from Kerala and Kentucky, lay people from different parishes across Rome, different dioceses across Italy, and different countries around the world.

I had been drawn there especially for the canonisation of St Oscar Romero. He is affectionately known as San Romero de la Americas, and there were plenty of Americans — from North, Central and South — who had come to Rome to honour him. But I was there as a Brit, of Indian origin, living in South Africa, no less inspired by this brave bishop from Central America.

He has a huge following in Latin America — and it seemed that half of the population of El Salvador had travelled to Rome. But he was being made a saint of the Universal Church and that is why the presence of his banner in St Peter’s was so important. His name is on now on the canon of saints (hence canonisation) that applies across the world.

In fact, a year before he became pope in 1963, as Cardinal Montini on a visit to South Africa, he had even blessed the foundation stone of Regina Mundi church in Soweto.

Universality was key to his overseeing the completion and implementation of the Second Vatican Council. It was Pope Paul’s desire to have universal vernacular sacred texts used by countries that shared a common language — and, in the case of English this was a job he entrusted to, among others, Archbishop Denis Hurley of Durban. 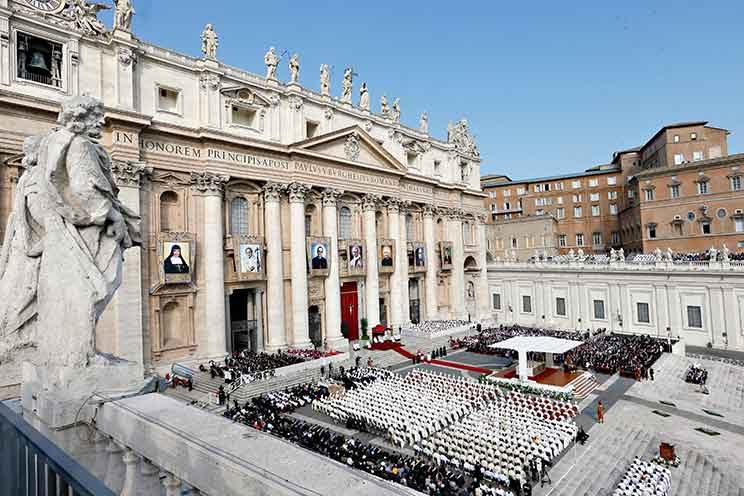 Three of the others who were canonised that day—Francesco Spinelli, Maria Katharina Kasper and Nazaria Ignacia — well-known in their home countries of Italy, Germany and Spain respectively—have had an influence on the Universal Church through the religious orders they founded.

The last two on the list, Vincenzo Romano and Nunzio Sulprizio, might have had no influence outside their local parts of Italy in their lifetimes, but their examples of fortitude and sacrifice were now being held up for the whole Church to imitate.

And a canonisation really is for the whole Church, which means both the (Catholic) West and the (Orthodox) East: what Pope John Paul II memorably called the “two lungs of the Church” (Ut Unum Sint, 54). That is why the gospel was chanted in both Latin and Greek.

I was also pleased to see the presence at the canonisation of representatives from the Church of England. Paul VI had set in motion the joint Anglican-Catholic commission with our “separated brethren”.

St Oscar Romero is widely revered in Britain. Indeed, 20 years ago he was already included as one of the modern martyrs immortalised on the west front of Westminster Abbey in London.

So here we were celebrating as a Universal Church, and it was wonderful to know I was adding to the universality — though I do regret not taking a South African flag to wave.

And then to reinforce this feeling of unity, I noticed Italian pilgrims behind me had the name “Mandela” on their caps.

It turned out that their suburb of Rome had been renamed Mandela in honour of our first democratic president.

Just as these other countries had nurtured heroes who could now be a gift to the whole world, it was good to know that South Africa has also nurtured a “secular saint” who is revered around the world.