Church Welcomes All, Calls All to Conversion 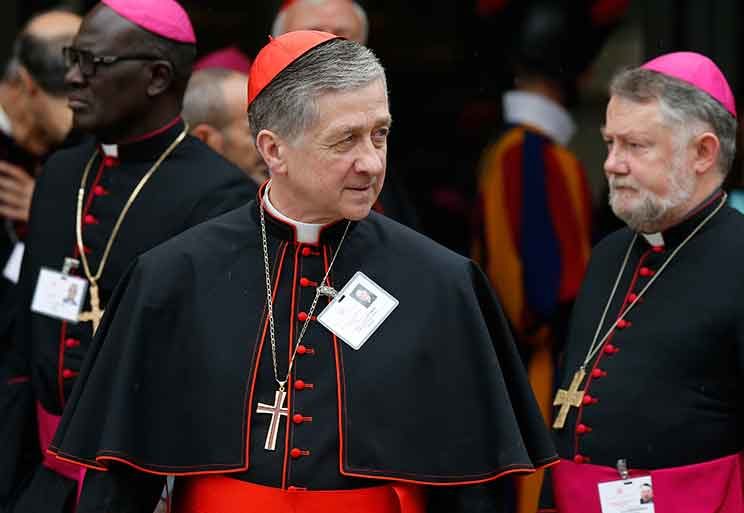 Cardinal Blase J. Cupich of Chicago leaves a session of the Synod of Bishops on young people, the faith and vocational discernment at the Vatican. He told reporters the group wanted to ensure that the synod’s final document would say “something that was inclusive of everyone.” (CNS photo/Paul Haring)

No one is excluded from the love of God or from being welcomed into the Catholic Church, but God’s love and the church’s welcome also come with a call to conversion, said the English-language groups at the Synod of Bishops.

Young people need to know “the church’s beautiful, yet challenging, vision, teaching and anthropology of the body, sexuality, love and life, marriage and chastity,” said the English-A group.

“At the same time, we restate the church’s opposition to discrimination against any person or group, and her insistence that God loves every young person, and so does the church,” the group said in its report.

The reports, published by the Vatican were the result of reflections in the small groups — divided by language – on the final chapter of the synod working document, which dealt with “pastoral and missionary conversion.”

Most of the 14 working groups called for further local and national dialogue with young people on what they need from the Catholic Church and what they can offer the church. Most also called for a greater involvement of women in the life of the church, including in the training of priests, and many acknowledged how the sexual abuse scandal undermines the church’s credibility.

None of the synod groups in any language used the term “LGBT,” but many of them did refer to a need to help young people who struggle with church teaching on sexuality or, more explicitly, those who experience “same-sex attraction.”

The English-B group said that it “discussed the issue of Catholics who experience same-sex attraction or gender dysphoria,” which refers to believing one’s biological sex does not correspond to his or her true identity.

The group asked that the synod’s final document include “a separate section for this issue and that the main objective of this be the pastoral accompaniment of these people which follows the lines of the relevant section of the Catechism of the Catholic Church.” The catechism teaches that homosexual activity is sinful, but that homosexual people must be respected and welcomed.

Three members of the group took part in the Vatican’s daily press briefing on the synod and were asked about the discussion on homosexuality.

Cardinal Blase J. Cupich of Chicago told reporters the group wanted to ensure that the synod’s final document would say “something that was inclusive of everyone.”

Cardinal John Ribat of Port Moresby, Papua New Guinea, said the synod could not ignore the topic because it is one of the things young people, inside and outside the synod, are talking about.

“Now,” he said, “the approach of the church is to be able to welcome everyone and to make them feel at home and that nobody is excluded. That is the church.”

Australian Archbishop Peter A. Comensoli of Melbourne told reporters, “Very simply, aren’t we all sinners and aren’t we all looking to be found by God and, being found by God, how might we then find our lives in him?”

The English-D group said it, too, “spent a good deal of time reflecting on the motif of the church’s stance of welcome and inclusivity. We fully and enthusiastically acknowledge that the church of Jesus Christ reaches out in love to absolutely everyone.”

“No one, on account of gender, lifestyle or sexual orientation, should ever be made to feel unloved, uncared for,” the group said. “However, as St. Thomas Aquinas specifies, love means ‘willing the good of the other.’ And this is why authentic love by no means excludes the call to conversion, to change of life.”

The group also echoed a sentiment shared by other groups that through the synod, the speeches and the contributions of the young adults present, “it became eminently clear that young people crave holiness of life and desire practical training that will help them walk the path of sanctity.”

The French-B group asked for a special section in the synod’s final document on “the gift of the body (and) the grace of affectivity and sexuality.”

The section should explain church teaching clearly and in a way young people understand “to avoid confusion,” the group said. But “we believe it is important to deepen a reflection on pastoral outreach and the mission of the church regarding certain categories before introducing them into the document.”

The Spanish-B group, led by Cardinal Luis Ladaria, prefect of the Congregation for the Doctrine of the Faith, also called on the Vatican – probably his office – to prepare a document in which “the subject of sexuality is approached in a systematic and clear way, with anthropological arguments, accessible to all young people, that shows that the virtue of chastity is a joyful affirmation that creates the conditions for human and divine love.”

“We must adopt a welcoming and cordial attitude to promote the integration and accompaniment of all people, including those of different sexual orientations, so that they may grow in faith and in their relationship with God, who is love and the source of truth and mercy,” the group said.

The French-A group said church leaders must remember that “the life of a young person 16 to 30 years old is not linear. It is marked by successes, failures, decisive and happy stages like passing an exam, getting one’s first job, entering a relationship or creating a family. It is important to allow young people to live these moments spiritually, discerning in the Holy Spirit the path God is opening before them.”

The English-C group, like many others, noted that while the synod can provide general suggestions for listening to young people and involving them in the life of the church, individual parishes and dioceses will need to find specific ways to put those suggestions into practice.

“We suggest that episcopal conferences be strongly invited to take up the results of the synod and engage in a similar process of reflection in their own milieus, even including nonbishops in the deliberations, as this synod has done,” the group said.

The Spanish-A group asked that Pope Francis, in celebrating the closing Mass for the synod Oct. 28, make a formal gesture to symbolise he is sending all the synod participants back to their home countries to put into practice what they heard at the assembly. By Cindy Wooden Catholic News Service