Electing a Pope: The Conclave of October 1978 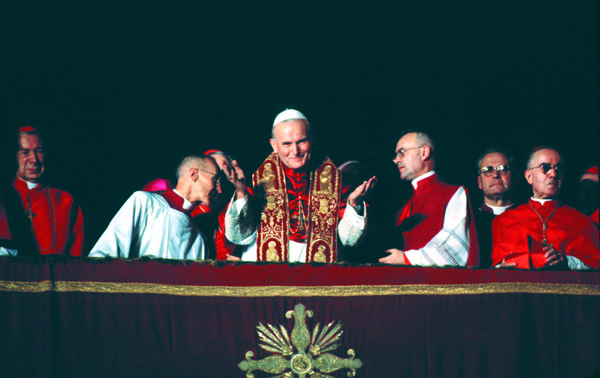 When Polish Cardinal Karol Wojtyla was elected pope 40 Years ago on October 16, it was a big surprise to most people. GUNTHER SIMMERMACHER looks at the conclave that brought us Pope John Paul II.

October 1978: The world’s cardinals gather in Rome to elect one of their own as the new pope, the second time they are called to do so in less than two months.

The August conclave, although regarded as an open race, had been fairly straightforward. In electing Albino Luciani, Pope John Paul I, the cardinals showed what sort of pope they were looking for: a pastoral pontiff, a good communicator, doctrinally a moderate conservative, one who is neither a member of the curia nor part of an old boys network. The Holy Spirit provided one such, and God the Father took him away not a full month later.

Now the electors will most likely look at a younger man, even a non-Italian after all, there had been talk of a first non-Italian pontiff in 455 years before the August conclave.

The doyen of the Vatican press corps, the ex-Jesuit Peter Hebblethwaite, speculates that such a man could be the 54-year-old Brazilian Aloisio Lorscheider (though Hebblethwaite concedes that Lorscheider’s young age and reportedly fragile health might count against him).

The Third Word had been an important issue in the August conclave. Luciani’s concern for the poor nations of the world had helped secure the support of most Latin American, African and Asian cardinal-archbishops. 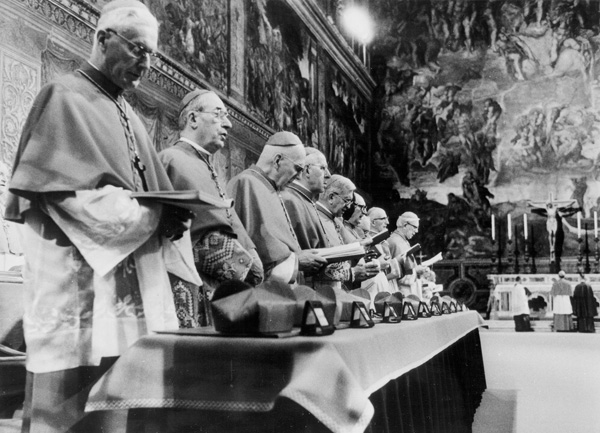 Cardinals gather in the Sistine Chapel at the Vatican in August 1978 for the conclave that led to the election of Pope John Paul I. (Photo: KNA/CNS)

And if the cardinals go for an Italian, Hebblethwaite conjectures that Corrado Ursi of Naples (age 70) or Salvatore Pappalardo of Palermo (60) would be suitably non-curial and pastoral.

Of course, nobody discounts the Italian heavyweights: Giovanni Benelli (57), a former aide to Paul VI and archbishop of Florence; the conservatives Pericle Felici (67), the prefect of the Apostolic Signature; and Giuseppe Siri (72), archbishop of Genoa. The latter had been eminently papabile in 1958 and 1963, and evidently could imagine himself wearing the papal tiara which John Paul I had eschewed in favour of a simple pallium (as would his successor).

Before the August conclave, the outspoken American priest-sociologist Andrew Greeley told US television that he expected 73-year-old Cardinal Franz König of Vienna to be the next elderly interim pope. Now, in October, Fr Greeley doesn’t fancy König’s chances. Instead he backs a computer analysis that has Ursi as the next pope.

König does not see himself as papabile either. An influential cardinal  — he played a large part in securing Pope Paul VI’s election in 1963 —  he had backed his friend Karol Wojtyla, the 58-year-old archbishop of Krakow, in the first conclave of 1978. In the run-up to Conclave II he has become even more excited at the notion of the next pope being Wojtyla — Wojtyla, who with Lorscheider and Bernardin Gantin of Benin had been a scrutineer (or counting officer) of the ballots in August.

The men who might have been pope: Cardinals Lorscheider, Siri, Pappalardo, Benelli, Felici and Ursi.

In the run-up to the conclave, König makes sure that as many electors as possible will be acquainted with the book of Wojtyla’s 1976 papal Lenten retreat, Segno di Contraddizione (Signs of Contradiction). Across the spectrum, it appeals. It also makes a deep impression on the editor of the Spanish edition of the Vatican newspaper L’Osservatore Romano, Fr (later Bishop) Cipriano Calderon Polo, who buys up all the copies he can find, convinced that Wojtyla will become pope. Many cardinals have a copy of the book in conclave (thoughtfully provided by König).

Wojtyla himself, roomed in cell 91, brings with him a Marxist philosophy journal.

Whom Did Wojtyla Back?

The Polish prelate is rumoured to be backing Benelli, speculation based purely on the two cardinals having been spotted lunching together. But that is just the hacks playing their guessing games.

The Italian press, sensing that the new pope might not be an Italian (what a loss of prerogative!), throws its weight behind Siri, claiming that he already has 50 votes in the bag — forgetting that cardinals have a way of changing their minds once they are locked up in conclave.

Indeed, Siri makes it easy for the electors to do so by the publication (possibly against his wishes) on the eve of the conclave of an extraordinary interview with the Gazetto del Popolo. In it Siri ridiculed Pope John Paul I, spitefully attacked the secretary of state, Cardinal Jean Villot, and insulted the interviewer in terms that do not conjure notions of a wise and kind shepherd. 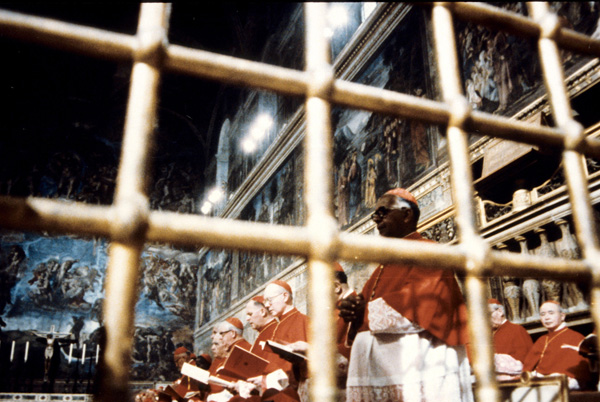 Cardinals are pictured behind a screen as they gather in the Sistine Chapel for the conclave of October 1978 which elected Cardinal Karol Wojtyla as the 263rd pope. (Photo: Catholic Press Photo/CNS)

Monday, October 16, 1978: As the cardinals withdraw into conclave, it becomes apparent that Wojtyla now has four backers: König; Vicente Enrique y Trancon of Madrid; his fellow Pole and mentor Stefan Wyszynski; and the Polish-born archbishop of Philadelphia, John Krol.

To little avail, it seems. After the first ballot, Siri leads with 23 votes, trailed by Benelli on 22, Ursi on 18, Felici on 17 and Pappalardo on 15. Wojtyla has only five.

After round 2, Siri is down to 11, while Benelli has taken the lead on 40, followed by Felici on 30. Ursi has held his 18 votes. Pappalardo has dropped, but Wojtyla has somehow gained four more votes.

In the next ballot, Benelli, on 65 votes, edges closer to the required 75. All of a sudden, Wojtyla has 24 — probably most of Ursi’s votes (he now has only four). However, a new challenger emerges with 14 votes: Giovanni Colombo, the 76-year-old archbishop of Milan, an apparent compromise candidate for the Italian Felici/Siri bloc.

Before the fifth ballot, Colombo asks not to be considered any longer. Benelli now has 70 votes, Wojtyla 40. Clearly, Colombo’s Italian bloc votes did not go to Benelli, who nonetheless is only five votes short of becoming pope.

The sixth ballot is decisive: Benelli 59, Wojtyla 52. It’s over for the Italian, but Wojtyla still needs another 23 votes — and it is not certain that he will get them.

As the cardinals break for lunch (cannelloni, since you ask), König observes his Polish friend. He later describes him as pale and pensive. During the break, Wyszynski and König gently but firmly persuade the reluctant cardinal-archbishop of Krakow that he must accept the will of the Holy Spirit.

The newly elected pope, whose life has just been turned upside down in ways he could not have anticipated when he rose that morning, sits with his head in hands, tears flowing. Cardinal Basil Hume of Westminster later recalled feeling desperately sad for the man, now so irrevocably divorced from his old life.

After sustained applause and general elation (even Benelli is amiable in defeat), Cardinal Villot, the camerlengo, formally asks the pope-elect: “Do you, most reverend Lord Cardinal, accept your election as Supreme Pontiff, which has been canonically carried out?”

With tears in his eyes, the new, yet unnamed pope, intones: “With obedience in faith to Christ, my Lord, and with trust in the Mother of Christ and the Church, in spite of great difficulties, I accept.” He takes the name John Paul II.

Cardinal Who? An African?

While Pope John Paul II is being dressed in his papal robes, Cardinal Felici steps on to the balcony overlooking St Peter’s Square and announces the papal election of Cardinal Carolum Wojtyla.

Cardinal who? A foreigner? An African? The crowd — 200,000 of them, mostly locals — are incredulous.

At 19:21, almost two hours to the minute after the result of the final ballot was announced, the first Slavic pope ever and the first non-Italian in more than four and a half centuries enters the balcony: the world sees the new pope, a man most had not even known existed. His inaugural words will be significant, a moment in which the straniero might win or lose the hearts of the Romans.

“All honour to Jesus Christ.” The crowd responds. The prayerful formalities out of the way: “Dear brothers and sisters!” Echoes of John Paul I, and in flawless Italian, too. “We are still grieved after the death of our most beloved John Paul I. And now the most eminent cardinals have called a new bishop of Rome from a far-off land; far yet so near through the communion of faith and in the Christian tradition.”  A foreign pope, but already at home in Rome.

Then an endearingly self-deprecating touch: “I don’t know if I express myself in your — our — Italian language well enough. If I make a mistake, you will correct me.” The Polish pope has won the hearts of the Romans, and the world, in a matter of minutes.

South Africa’s Cardinal Owen McCann is said to have sat with the Benelli camp during the conclave. Yet, interviewed after the conclave, he is, like his brother cardinals, full of praise for the new pope. “I think he is going to be a fine pope,” he predicts, accurately. “I think he is a very spiritual man, and most certainly is pastorally minded.” Cardinal McCann says that he expects John Paul II’s pontificate to focus on areas such as ecumenism, evangelisation, peace and collegiality.

Fast forward to April 2, 2005. After 26 years and five months, Pope John Paul II’s pontificate ends, the third longest in history. What if the Holy Spirit had prompted the most eminent cardinals to elect another man?

Of the papabili mentioned, Lorscheider died in 2007 and Pappalardo a year earlier — though there is no way of knowing whether their fragile health might have withstood the rigours of the papacy. Benelli and Felici both died in 1982; Siri in 1989; Colombo in 1992; and Ursi in 2003.