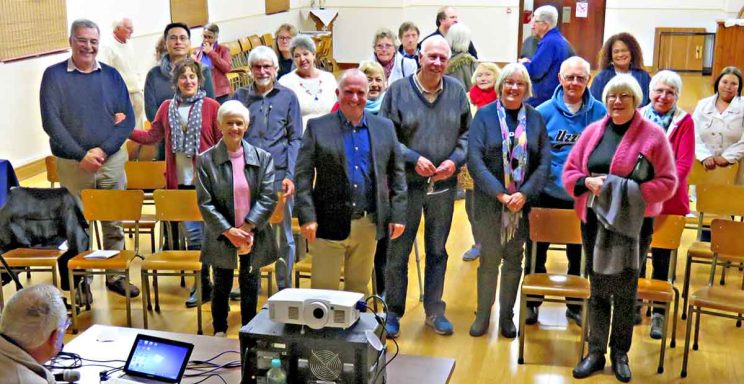 Günther Simmermacher (front) with members of the audience for his talk on Christians in the Holy Land at Fish Hoek parish in Cape Town. (Photo: Magda Kus)

If we are looking for an example of Christian unity in action, we should look to the Palestinian Christians, and other Christian communities in the Middle East.

This was one of the messages in a talk on Christians in the Holy Land given in Fish Hoek, Cape Town, by Günther Simmermacher, editor of The Southern Cross and author of the book The Holy Land Trek.

“It doesn’t matter to the Palestinian Christians whether you’re Roman Catholic, Orthodox, Syriac, Maronite, Protestant or whatever. What matters is that you are a Christian,” Mr Simmermacher explained.

“They will observe their liturgical rites in their own particular way, but on their big feasts they’ll join each other for celebration.”

As a small and rapidly diminishing community, the Palestinian Christians have to stick together, Mr Simmermacher pointed out.

His talk formed part of the “Efata” series of lectures hosted by St John’s parish in Fish Hoek. Among the audience was interim parish priest Bishop Frank de Gouveia, who recently resigned as head of Oudtshoorn diocese.

In his talk, Mr Simmermacher noted that Palestinian Christians feel like they are “between the anvil and the hammer”.

“The anvil is the Muslim majority in the Palestinian community,” he explained. Relations between Muslims and Christians are generally not bad, and cooperation is constructive even between Hamas and the tiny Christian minority in Gaza. But in the scramble for scarce resources and social influence, a minority will always find it more difficult to assert itself.

“The hammer is the state of Israel, which makes no distinction between Palestinian Muslims or Christians,” Mr Simmermacher said.

He outlined various forms of oppression experienced by Palestinians, including loss of land through the separation wall and illegal settlements and, for those in the West Bank and in Gaza, limitations on freedom of movement.

Mr Simmermacher explained how Israeli bureaucracy prevents Palestinian Christians from freely worshipping at their holiest sites, such as the church of the Holy Sepulchre in Jerusalem or the church of the Nativity in Bethlehem.

“I know many Christians in Bethlehem [in the West Bank] who have never been to the church of the Holy Sepulchre, which is only 20km away, because Israel won’t give them a permit to enter Jerusalem.”

Noting the rapid decline of numbers of Christians in the Holy Land, Mr Simmermacher urged solidarity with them.

“These are the descendants of the very first Christians. Our solidarity must be with them. And your presence here tonight, to hear about their situation, is a sign of that solidarity,” he told the audience.

If the indigenous Christians of the Holy Land — often called the “Living Stones” — disappear from that region, then “all the churches and shrines we visit on pilgrimage will be just monuments”, Mr Simmermacher warned.

In a Q&A afterwards, he said travelling to the Holy Land in a group is perfectly safe. “If there are trouble spots, the guides and drivers know about it and will make a plan to ensure their pilgrims are 100% safe.”

Mr Simmermacher urged potential Holy Land pilgrims to ascertain that the tour operator uses Christian Palestinian guides. “That, too, is an important sign of solidarity,” he said.