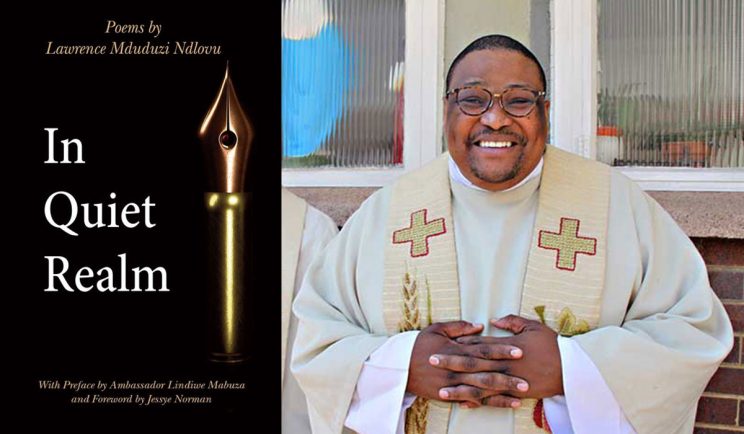 A  Johannesburg priest has published his first book of poetry — and had a world-famous singer write a foreword to it.

Fr Lawrence Mduduzi Ndlovu’s anthology In Quiet Realm will be officially launched on November 22 at St Augustine College in Johannesburg.

The forewords to the book were written by US opera superstar Jessye Norman and Lindiwe Mabuza, the South African ambassador to the United Kingdom.

Fr Ndlovu credits Ms Mabuza, herself a renowned poet, for giving him confidence “in my own language and poetry”.

“After she read some of my poems, she gave such inspiring feedback that I started feeling confident about them,” the priest said. “She also assisted me often with editing some things here and there.”

The Soweto-born priest said he has written poetry “from my high school days, stopping and picking up at different times”.

“I have always written poems in order to process or even let out some thoughts that have lingered in my mind, but I have not always had the intention of publishing them,” Fr Ndlovu told The Southern Cross.

“Some were written for a specific purpose and were meant to be published. For example, ‘Waters of Wars’ was written to mark the centenary of the sinking of the SS Mendi and it was published on the day of the centenary,” he said.

“After a while — years really — I discovered that I had poems on my computer and on USB sticks and in my old diaries, so I decided that maybe I should publish some of them.”

Fr Ndlovu doesn’t think of himself as a classical kind of poet. “I don’t always think about form, rhyme and so on. I am a historical, autobiographical, philosophical, theological kind of poet. Some poems are like short stories. My style is varied.”

“I remember seeing a clip of her singing the French national anthem at the official state celebration of the bicentenary of the French Revolution,” he said.

“That event was watched by millions present at the Place de la Concorde that night and millions across the world.

“What I saw that day was an African-American, a descendant of slaves, singing the Marseillaise, that masterpiece of civilian freedom,” Fr Ndlovu recalled.

“She, who was born during the racist Jim Crow time in the American South, was the herald of freedom: fraternity, liberty and equality!”

Fr Ndlovu wrote the poem titled “I shall be heard” about this, which appears in the book, and sent it to the soprano via the Jessye Norman School of the Arts in Augusta, Georgia.

“Months later I received an e-mail from her. We kept in touch and later I requested that she write the foreword to my book — and she said yes.”

Ms Norman wrote: “Fr Lawrence would have us remember to hold close in our minds and hearts all that we are, all that has made us, and all that we are empowered to be.”

The book, with a cover designed by Southern Cross editor Günther Simmermacher, is published by Write-On Publishing (www.writeonpublishing.co.za) and sells at a recommended price of R180.

It is also available on Amazon or from Radio Veritas, and will be in bookshops soon.

The November 22 launch at St Augustine College will start at 17:30. To attend, e-mail mahadi.buthelezi@gmail.com