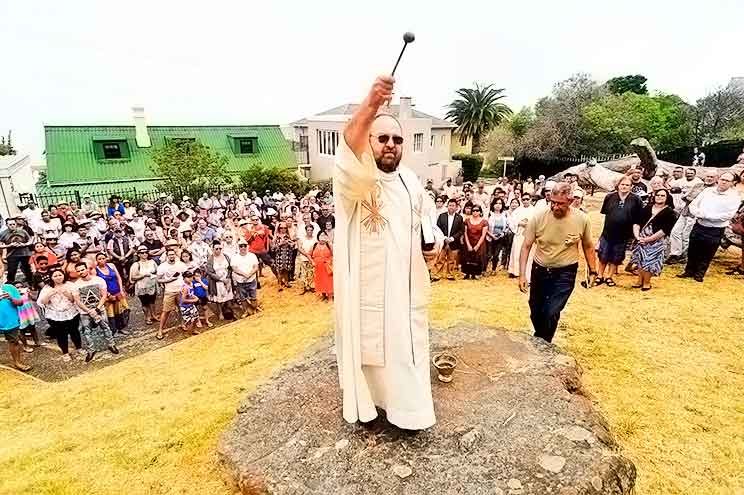 Fr Mark Pothier blessed the old ground of the old Filipino cemetery at the foot of the newly-named Manila Steps in Kalk Bay, Cape Town.

By Steve Herbert – More than 300 people, most of them descendants of Filipino settlers, witnessed the renaming and blessing of a flight of steps at Kalk Bay, Cape Town, as Manila Steps.

The naming of the Manila Steps was accompanied by an atmosphere of happiness that the “Manilas”, as the 19th-century Filipino migrants to the harbour suburb were known, had finally received recognition.

The group walked along Gatesville Road down the steps to the old graveyard at the end of Upper Quarterdeck Road, where many of their ancestors were buried up until 1903.

At the old graveyard, Fr Mark Pothier of the local St James’ church stood on what was known as the “Pulpit Stone” and blessed those buried there many years ago.

Imam Shafiek Ariefdien of Kalk Bay mosque then said a prayer for all assembled. Fr Wilfred Meyer of the Anglican Holy Trinity church in Kalk Bay blessed the steps.

Fr Rico Talisic, a Catholic priest from the Philippines based in District Six, prayed in his native language Tagalog, which last was heard in Kalk Bay 100 years ago when the oldest Filipino settler died.

The ceremony was completed when an information board erected by the Kalk Bay Historical Association was unveiled by the Philippines’ ambassador Joseph Angeles.