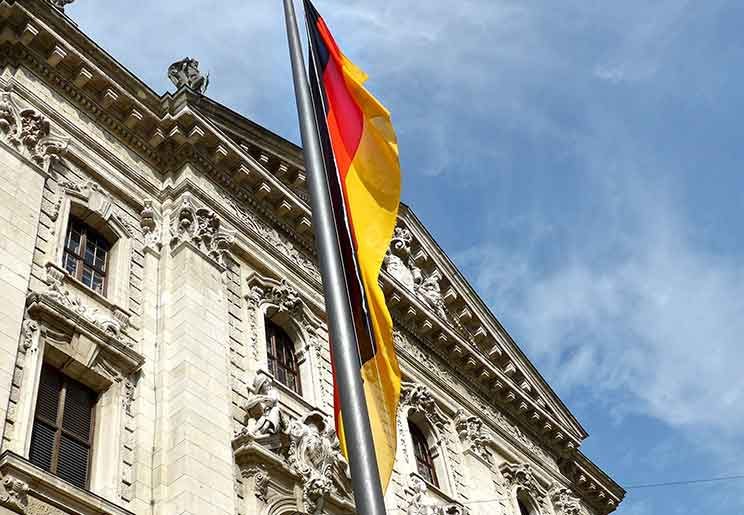 The German flag is seen outside the Ministry of Justice in Munich. German police and prosecutors are launching investigations into clergy sexual abuse following the Sept. 12 leak of a report containing evidence of 3,700 alleged child sex abuse cases in the Catholic Church over a 68-year-period. (CNS photo/Zita Ballinger Fletcher)

German police and prosecutors are launching investigations into clergy sexual abuse following the release of a report containing evidence of 3,700 alleged child sex abuse cases in the Catholic Church over a 68-year-period.

Authorities in Cologne, Passau and Gorlitz have publicly initiated criminal proceedings following the release of the report, according to Welt news. Six law professors filed criminal complaints against all 27 dioceses in October. A further 20 public prosecutors nationwide are currently examining evidence against church officials in Germany’s 27 Catholic dioceses.

According to a report by the Frankfurter Allgemeine Zeitung, public prosecutors who have not yet openly brought charges are doing so with an aim to identify all parties involved in cover-ups and root out larger conspiracies within the church. Details of the investigations are being kept confidential. Authorities currently doing investigative research include those of Osnabruck, Wurzburg and Bamberg.

Archdioceses currently being affected by criminal proceedings have been asked to reveal all details of known cases and to hand over all relevant documents to government authorities.

The abuse cover-up scandal, which caused widespread shock in Germany, has also drawn attention from Germany’s national government. On Nov. 22, the permanent council of the German bishops’ conference announced it was cooperating with the federal government to take further steps following the release of the report, including the standardization of file management in all dioceses, establishing contacts for victims not affiliated with dioceses, and identifying, through an independent review, who exactly was responsible for institutional cover-ups.

Spokesmen for the German bishops’ conference have declared its “full cooperation” with judicial authorities. Some archdioceses have already made their files available to public prosecutors, according to KNA, the German Catholic news agency.

In the face of mounting public pressure in Germany surrounding the celibacy of priests in response to the abuse crisis, the bishops’ conference has announced it “review” the celibate lifestyle of priests at its next permanent council meeting. The bishops said they will invite various professionals from different disciplines to discuss the matter and said they are developing a detailed “work plan” for this meeting. By Zita Ballinger Fletcher Catholic News Service