How the Apostleship of the Sea Helps Abused Sailors 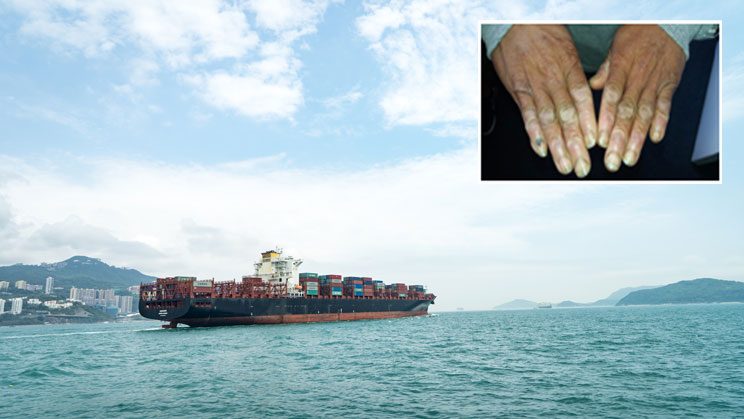 A Filipino seafarer, whose damaged hands are pictured, approached Apostleship of the Sea for legal help.

While Apostleship of the Sea has as its primary purpose the pastoral care of seafarers, the international Catholic organisation also engages itself for the rights of those who spend their lives at sea.

These rights are often violated, said Nicholas Barends, the national coordinator of AoS in South Africa.

The Life of a Fisherman

One concerned a Filipino fisherman who had been working for 23 months on a Japanese vessel. His hands were badly calloused and frostbitten because of a lack of proper safety clothing, including gloves, when working in ice in the freezer-hold of the vessel.

Usually, he and his colleagues would work 18-hour shifts, which at times would extend to 24 hours, as the captain and owner of the vessel always promised them overtime on top of their salaries.

That promise was broken, and they received only their basic salaries.

“Some of the crew came to us for help in getting the owner to pay their overtime of 23 months,” Mr Barends said. “As only four of the crew were willing to speak out, it wasn’t possible to have the vessel arrested as 23 of the crew opted to go home.”

The four crew members also did not remain in Cape Town for the complaint to be resolved through official channels, because they were missing their families.

In the short period of two days between the crew members conveying their complaint to AoS and their departure to the Philippines, AoS intervened as much as was possible.

“I managed to at least get a guarantee letter from the owner, which stated that he had paid all their overtime,” Mr Barends said.

“Without the help of AoS, these kinds of cases go unnoticed. The salary and stipends paid for by AoS are so necessary as these seafarers have someone to turn to as we are immediately contactable in the harbours,” Mr Barends explained.

Another case concerned two Tanzanian seafarers who had been repeatedly beaten for nine months on board a Far East Asian ship.

Within four days of AoS hearing of the abuse and intervening, the two men were on a flight back home to Tanzania, paid for by the owner of the vessel, having received $2000 (about R29000) each as part of their salaries and compensation.

He explained that the ITF Seafarers’ Trust — a charitable maritime organisation, established in 1981 by the International Transport Workers’ Federation—is not active in South Africa “to help these fishermen quickly before the vessel sails”.

Without the intervention of AoS, the abuse of the two Tanzanian seafarers “would have continued unabated”, he said.

“We need the funds to keep someone employed full-time, so that these types of cases are dealt with, for the sake of the lives of these seafarers who have nobody else to turn to for help,” Mr Barends said.

The Tragedy of Child Labour