Archbishop On Ancestors And The Faith In Africa 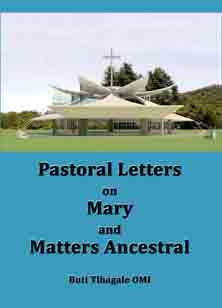 Archbishop Buti Tlhagale of Johannesburg, has a plan: to build a place of pilgrimage for his flock in the Magaliesberg. Inspired by the 2015 Year of Mercy, he will dedicate it to Our Lady under the title “Mary, Mother of Mercy”.

The archbishop hopes that the sale of this book will promote a burgeoning veneration of our merciful Mother and simultaneously support the undertaking of the project.

The book is unusual, as is apparent from its title. It is a compilation of pastoral letters on Mary and the way the faithful have embraced her in history, together with a scholarly analysis of Christian spirituality in its encounter with the active part played by deceased ancestors in African culture, which penetrates the daily lives of millions.

Archbishop Tlhagale recalls that it was only 200 years ago that the Catholic faith was officially planted on Southern African soil, where age-old respect for the tribal ancestors constitutes the cornerstone of African popular religion. The promptings and interventions of ancestral spirits are central to the indigenous population which knows no reference to a supreme being, no God, no Christ.

If to be converted to Christ is to be totally taken over by him as God, then the ancestral influence is irrelevant. In spite of this, the power of Christ and his Church and the ancient, tenacious power of the ancestral spirits appear to coexist.

The author concedes that “at present, it is the overpowering force of tradition, of culture (and clearly not the Gospel) that determines the stakes” (p129). The Christian condemnation of belief in ancestral spirits simply drives it underground.

The archbishop unravels to the Western mind the pervading African acceptance of a cosmos replete with spirit-beings. He invites us to understand how Christian culture failed to recognise the African worldview and its values. It expected converts to assimilate Western ideals and spirituality.

Christian missionaries brought their own rituals, vestments, gestures and the general concept of persons and community to a firmly rooted African way of life that could accept them only partially.

Faith has its own life independent of culture yet it is expressed in a cultural form. The author explains that inculturation therefore means that the Christian faith can find a home in African culture and open it up to new challenges.

Faith in God as a merciful Father is already dethroning the ancestors from their human-made pedestal. A deepening faith and the influence of education is subverting belief in magic, witchcraft and divination.

The Christian message is gradually expressing itself in the local culture and the old African worldview will never be the same again. Yet aspects of the ancient culture remain resilient.

Archbishop Tlhagale’s exposition of the world of African traditional religion is the fruit of his own experience and years of research from the base of his firm Catholic conviction.

He sketches the similarities and differences between saints and ancestors and a lot more, which the reader will find fascinating and instructive.

In publishing his letters, the archbishop has given us an overdue clarification of how African Christianity is evolving and how the Church is still on its pilgrimage to preach to all nations.

It is obvious that he trusts Mary, Mother of Mercy, to intercede that the shrine will become a truly African one.

• The book can be ordered from www.sacatholiconline.org