Trappist Martyrs to be Beatified in Algeria 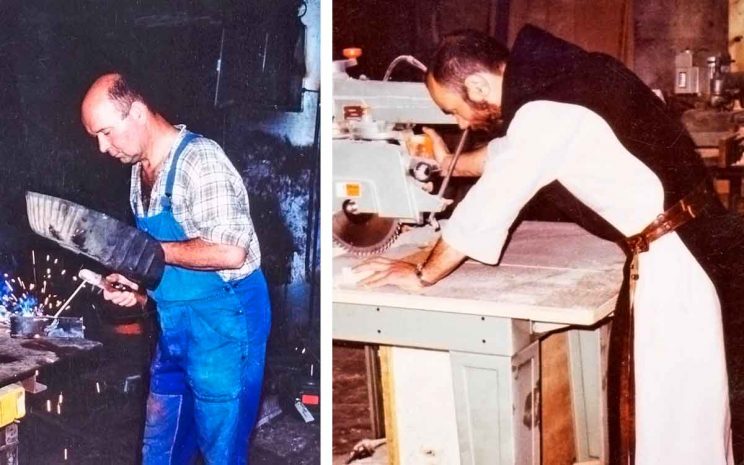 (Left) Br Paul Favre-Miville works with metal at the monastery of Notre Dame de l’Atlas near Medea, Algeria. (Right) Fr Christophe Lebreton at work in the monastary where he and six other Trappist monks were murdered in 1996 by members of the Armed Islamic Group. The martyrs will be beatified on December 8 in Oran, Algeria. (Photo: Vatican Dicastery for Communication/CNS)

After Islamic terrorists stormed the Algerian monastery he called home, Trappist Father Christian de Cherge — who with 18 others will be beatified on December 8 — felt compelled to put pen to paper and write down his testament.

Fr de Cherge, prior of the Monastery of Notre Dame de l’Atlas, said he held no ill will to those who would eventually kill him. In his letter, written between December 1, 1993, and January 1, 1994, he said he knew extremists in the country followed a “caricature of Islam” and urged his loved ones to not confuse Muslim “religious tradition with the all-or-nothingness of the extremists”.

“I do not see how I could rejoice that this people that I love should be globally blamed for my murder,” the Trappist monk wrote.

The sense of impending doom felt by Fr de Cherge would prove correct when he and six of his fellow Trappists — Frs Christophe, Bruno and Celestin, as well as Brothers Luc, Michel and Paul—were murdered in 1996 by members of the Armed Islamic Group in Tibhirine, Algeria.

More than 20 years after their martyrdom, the seven Trappist monks will be beatified along with 12 of their fellow martyrs who were killed from 1993-96, while Algeria was locked in a ten year armed conflict between government forces and extremist Islamic rebel groups.

Cardinal Angelo Becciu, prefect of the Congregation for Saints’ Causes, will preside over the December 8 Mass and beatification for the six women and 13 men in Oran, Algeria.

In anticipation of their long-awaited canonisation, the Vatican publishing house, Libreria Editrice Vaticana, presented a new book on the lives of the Trappist martyrs: Simply Christians: The Life and Message of the Blessed Martyrs of Tibhirine.

The book, written by Trappist Father Thomas Georgeon, postulator of the monks’ canonisation cause, and Francois Vayne, communications director for the Knights of the Holy Sepulchre, details the lives of the monks before their martyrdom.

Cardinal Becciu, who wrote the book’s preface, said that the example of the Trappist martyrs teaches Christians today to be “strong, courageous, faithful and coherent” in the face of persecution and to give “themselves to the cross, even though going to the cross brings extreme consequences”.

Recalling Fr de Cherge’s final testament, Cardinal Becciu said the martyred prior knew until the day he died how to distinguish between “the Islam that he knew and he experienced” and the beliefs of extremists who “betrayed Islam in its essence”.—By Junno Arocho Esteves, CNS