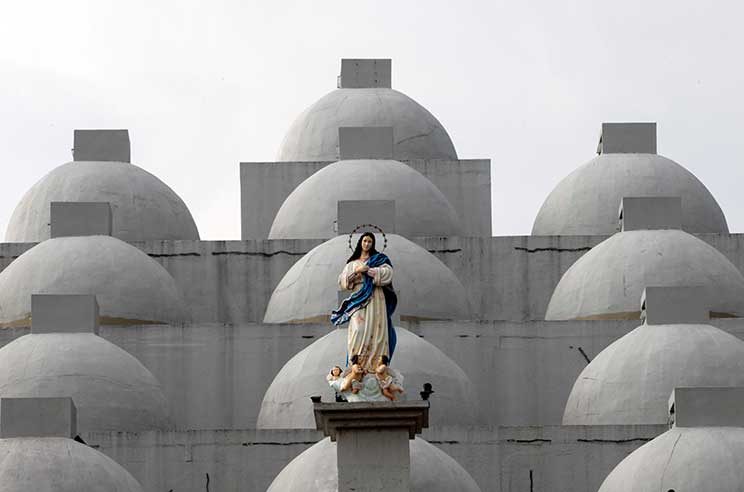 A statue of Mary is seen in 2017 atop the Cathedral of Managua in Nicaragua. A 24-year-old woman dumped sulfuric acid on a priest while he was hearing confessions in the cathedral. (CNS photo/Oswaldo Rivas, Reuters)

A 24-year-old woman dumped sulfuric acid on a priest while he was hearing confessions in the Managua cathedral.

Father Mario Guevara, 59, was immediately taken to the hospital and treated for burns.

The Archdiocese of Managua asked for prayers for the priest, who has diabetes and hypertension.

A Nicaraguan church source told Catholic News Service Dec. 6 the priest had a chemical burn on one eye and his shoulders. “He is already at home and is stable from his diabetes and his pressure.”

Witnesses said after the woman was controlled by the people in the cathedral, she yelled: “… Call the police if you want!! I know they cannot do anything against me.” Police came and arrested her.

A tweet from Sofia Montenegro Alarcon, an award-winning Nicaraguan journalist, social researcher, and feminist, said the acid attack “bears a ‘chamuca’ trademark of a supposed feminist, who nobody in the movement recognizes.” She said it was associated with clubs and bars linked to the regime of Nicaraguan President Daniel Ortega.

The conflict in Nicaragua initially erupted over an attempt to reform the country’s social security institute, which critics allege had been mismanaged. Students joined in and called for Ortega to step aside. Ortega and Murillo have called the protesters and opponents “terrorists” and “coup mongers.”

Churches were turned into collection centres and makeshift clinics as many of the injured feared going to public hospitals, where they risked arrest, according to physicians fired by the government.

The Nicaraguan bishops’ conference convened a national dialogue after protests erupted in April and opponents demanded Ortega’s ouster, but the bishops suspended talks, saying there was a lack of consensus.

In July, Managua Cardinal Leopoldo Brenes Solorzano, Managua Auxiliary Bishop Silvio Baez and Archbishop Waldemar Stanislaw Sommertag, the apostolic nuncio, were attacked in July by a pro-government mob as they attempted to protect a church in the city of Diriamba.

Bishop Rolando Alvarez Lagos of Matagalpa was pulled over by police Sept. 2; a pro-government mob yelled “killer” at him along the side of the road, according to video on social media.

In the city of Masaya, Father Edwin Roman Calderon told Catholic News Service he was verbally assaulted and shoved by the police chief, who had set up a loudspeaker outside the church just before Mass was to be celebrated Sept. 9.

“It’s pure repression, by the police, by paramilitaries, against citizens,” Father Roman said. “There’s no right to protest. … The first two or three young people who arrive at a protest, they’re taken away, they’re beaten so that other people don’t bother coming to the meeting point.”