Catholic Groups and Others Rail Against Trump Speech about Border 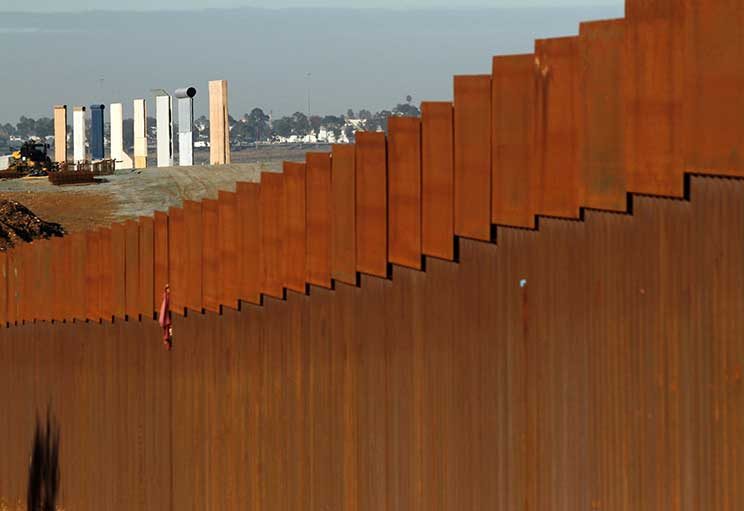 The prototypes for the border wall proposed by U.S. President Donald Trump are seen in a photo taken from Tijuana, Mexico, Jan. 7 behind an existing barrier at the border between Mexico and the United States. (CNS photo/Jorge Duenes, Reuters)

No sooner had President Donald Trump finished his Jan. 8 nine-minute speech, his first such event televised in prime time from the Oval Office, about what he termed a crisis at the border, than Catholic groups and others began tearing apart his arguments.

In email statements, via Twitter, in Facebook posts that cascaded overnight, they denounced his words as incendiary and untruthful and called on him and Congress to find different solutions to the country’s immigration woes, particularly ones that do not involve building a wall and include instead more compassion.

Trump said the wall, whose lack of funding triggered the ongoing partial government shutdown that began at midnight Dec. 22, was necessary to stop drugs and violent immigrants from coming into the country, which he called a “humanitarian and security crisis at our southern border.”

“Over the years, thousands of Americans have been brutally killed by those who illegally entered our country and thousands more lives will be lost if we don’t act right now,” he said.

On drugs, he said: “Our southern border is a pipeline for vast quantities of illegal drugs, including meth, heroin, cocaine and fentanyl. Every week, 300 of our citizens are killed by heroin alone, 90 percent of which floods across from our southern border.”

Fact checkers from various news organisations quickly pointed out research, including a study from the journal Criminology, that showed “undocumented immigration does not increase violence,” that most drugs come to the U.S. at already existing border crossings, so more wall- or barrier-building wouldn’t stop their transport.

The Center for Migration Studies, a think tank in New York connected to the Congregation of the Missionaries of St. Charles, known popularly as the Scalabrinians, disseminated information from one of its studies in 2016 that showed the number of “undocumented in the nation had dropped to 10.8 million, a new low.”

In a Jan. 10 statement, the chairman of the U.S. bishops’ Committee on Migration said the country can both secure borders and humanely treat migrants fleeing persecution and seeking a better life. These “are not mutually exclusive,” said Bishop Joe S. Vasquez of Austin, Texas.

“The United States can ensure both and must do so without instilling fear or sowing hatred,” he said, urging the president and congressional leaders to work together to come up with just such a solution.

On Twitter Jan. 8, the Sisters of Mercy quickly responded to Trump’s speech, calling it “another, in a long list of speeches, rooted in untruths, fear and division.”

They noted that the speech came as the U.S. Catholic Church marked National Migration Week, Jan. 6-12, to support and pray for immigrants, refugees, victims and survivors of human trafficking.

“It is particularly troubling that a speech of this nature comes while the church recognises #NationalMigrationWeek, a moment to reflect upon the desperate and harrowing circumstances confronting migrants, immigrants, and refugees,” the Mercy Sisters tweeted after the speech.

“Neither the continued government shutdown nor a declaration of national emergency aimed at funding a wall will correct years of failed U.S. immigration policy or ameliorate the U.S.’s role in the root causes of migration,” the Mercy Sisters wrote in a response published quickly following the speech.

“Make no mistake, there is a humanitarian crisis on the border, but it is one of the Trump administration’s own making,” they said. “One where asylum-seekers are forced to wait in dangerous and unhealthy conditions for weeks while their asylum claims are assessed and decided.”

The following morning, without referencing Trump’s speech, a Texas border bishop, Brownsville Bishop Daniel E. Flores — who is facing a dispute with government officials seeking to survey church property on which to build a wall — tweeted that “mothers and children are fleeing the very criminal elements that we ourselves recognize represent a mortal danger. Are we not capable of sustaining a response that both protects the vulnerable and restrains the menace?”

In a Jan. 9 statement, Cardinal Joseph W. Tobin of Newark, New Jersey, said he listened to the president’s speech “with deep disappointment to the dehumanizing words used to describe our immigrant sisters and brothers.”

“These men, women and children are neither numbers, nor criminal statistics, but flesh and blood people with their own stories and histories,” he said. “Most are fleeing human misery and brutal violence that threatens their lives. False and fear-filled caricatures seek to provoke a sort of amnesia that would have this great nation deny our roots in immigrants and refugees.

On Jan. 10, the president visited McAllen, Texas, and another prelate on the border, Bishop Mark J. Seitz of El Paso, said he would pray that “while he is at the border, President Trump will look into the eyes of those who are fleeing violence and poverty with compassion.”

He continued: “If you take time to look beyond walls, you will see in the faces of these children, mothers and fathers the same human dignity you recognise in your own family. Our nation is great enough to provide security for our citizens and also the refuge they so desperately need.”

Donald Kerwin, executive director of the Center for Migration Studies, urged the president and lawmakers to look at the conditions of persecution and violence in the Northern Triangle countries of Guatemala, Honduras and El Salvador. That, he said, is where this administration and Congress should focus, and instead fix the causes that drive the displacement of people.

“A series of measures designed to deter these vulnerable populations from fleeing their countries, including family separation, mandatory detention, zero tolerance and denial of entry at the border are undermining their legal and human rights, guaranteed under both domestic and international law,” Kerwin said.

“They are handing themselves over to Border Patrol agents in search of protection, not trying to enter the country illegally,” he said. “The administration and Congress should act to end these inhumane policies and provide protection to vulnerable women and children.”

Instead of shutting down the government over a wall, Kerwin continued, Trump and Congress should enact a legislative package providing permanent status to those benefiting from the Deferred Action for Childhood Arrival and Temporary Protected Status programs, “immigrant populations who have built equities in our nation.”

But neither the wall nor any other proposals to curb immigration set forth by immigration supporters seemed to gain traction after the speech. As the president and lawmakers met Jan. 9 to try to find common ground, reports trickled out about what was a failed effort.

Democrats said Trump slammed his hands on a table and walked out during the talks. Late in the afternoon of Jan. 9, the president tweeted his account of his meeting with top Democrats, Senate Minority Leader Chuck Schumer of New York and House Speaker Nancy Pelosi of California.

“Just left a meeting with Chuck and Nancy, a total waste of time,” Trump tweeted. “I asked what is going to happen in 30 days if I quickly open things up, are you going to approve Border Security which includes a Wall or Steel Barrier? Nancy said, NO. I said bye-bye, nothing else works!”

House Minority Leader Kevin McCarthy, R-California, countered the Democrats’ account and said cameras should be allowed in such meetings so there’s no dispute about what happened. Trump was courteous, he said, and even offered them candy.

“I just listened to Senator Schumer,” McCarthy said. “I know he complained the time that you had cameras in the meeting. I think we need to bring them back. Because what he described the meeting to be is totally different than what took place.”

Over the last several years, a number of Democrats, including Schumer and Hillary Clinton on the campaign trail in 2016, expressed support for a barrier at the border and said the country needed to control the flow of people coming into the country illegally.

Trump referred to this in his speech, and called them hypocritical for opposing such border security now that he is president. By Rhina Guidos Catholic News Service