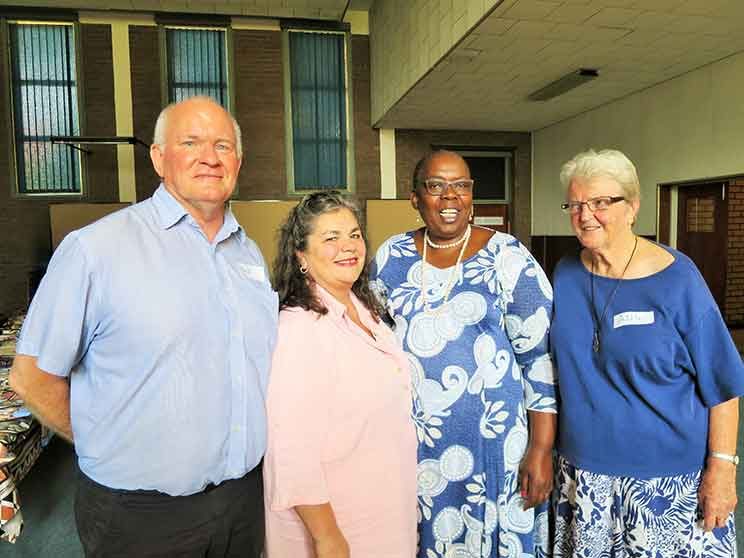 Dominicans and others attended the annual Dominican Day at Koinonia in Johannesburg. The event focused on sharing and reflection on coping with stress. (From left) organisers Fr Neil Mitchell and Professor Terry Sacco with speakers Nozizwe Madlala-Routledge and Sr Ann Wigley OP. (Photo: Judy Stockill)

By Judy Stockill – Peace was the theme at Koinonia in Johannesburg when about 70 people, not all of them Dominicans, attended the annual Dominican Day, sharing and reflecting on the subject of coping with the stress of our times.

They recited together the apt poem “Wage Peace” by Judyth Hill, and led the community in a meditative breathing exercise—a perfect lead-in to the first talk.

Sr Ann Wigley spoke of building islands of sanity, drawing on the work of writer Margaret Wheatley in Who Do We Chose to Be? and the new book by Joanna Macy and Chris Johnstone, Active Hope: How to Face the Mess We’re in Without Going Crazy.

She used images of the beauty of the earth and the cosmos contrasted with pictures and manmade rubbish, of young people full of hope contrasted with children in extreme poverty.

Sr Wigley drew attention to global and national problems, perpetuated by greedy and self-interested leaders, about which we can do nothing, suggesting that these are the signs of end times, of our civilisation in decline.

“Our response,” she said, “should be to make what small changes we can; be and build an island of sanity; recognise, support, and share islands of sanity around us.”

“In our exhausted civilisation and exhausting times we should ask ourselves,” Sr Wigley said, “What breaks my heart? What makes me feel truly alive? What is my calling? Am I living in service of compassion and justice?”

The answers to these questions are to be found in community, she offered. “An example is the growth from protest by Occupy Wall Street activists to Occupy Spirituality and the movement of new monasticism among the younger generation.”

Sr Wigley cited many examples of islands of sanity in our experience—our Catholic institutions such as the Catholic Institute of Education; people like Bishop Desmond Tutu, the late Nelson Mandela and the late Archbishop Denis Hurley; as well as little people who, for example, make gardens and create art in the midst of chaos.

“Become an island of sanity, find your community,” she encouraged those present.

During the leisurely tea break, there was ample opportunity to greet friends not regularly seen and discuss the topic.

In her talk on peacebuilding and conflict in Africa, Nozizwe Madlala-Routledge focused on South Africa and its peaceful overthrow of the apartheid regime, referring by contrast to other African countries.

Her experience of Africa includes her service on the steering committee of the Pan-African Peacebuilding and Nonviolence Network.

She was dismissed by then-president Thabo Mbeki when she disagreed with his views on HIV/Aids  and anti-retrovirals.

Mrs Madlala-Routledge is also a former director of the Quaker Peace Centre.

Her husband Jeremy Routledge, seated beside her during her talk, was a co-creator of the Pan-Africa Peacebuilding and Nonviolence Network.

In her talk, Mrs Madlala-Routledge said that peace does not mean that there is no conflict, but that creative ways of dealing with conflict have been found.

Creation, she said, implies peace and harmony, but humans disrupt harmony—even of creation, climate change being an example.

“Even when the people of a country are peaceful, as in the Democratic Republic of the Congo and Zimbabwe, warlords and state violence are hard to resist,” Mrs Madlala-Routledge said.

Moving to South Africa, she said that former public protector Thuli Madonsela’s call for a commission into state capture was a courageous non-violent act.

Mrs Madlala-Routledge spoke of her disappointment that her comrades in the struggle for freedom have proved to be motivated by self-interest.

During the struggle, the Routledge home was a safe haven for youths fleeing the violence of the townships. In 1988 Mrs Madlala-Routledge spent a year in solitary confinement.

“Sustainable peace,” noted Mrs Madlala-Routledge, “needs sustainable economic development. My comrades need reminding of why they are in politics.”

The day concluded with Mass. In his homily, Fr Neil Mitchell, a friend of the Routledges, spoke of Jesus reading from the scroll of Isaiah and telling the Israelites that there would be no day of vengeance and that God is a non-violent God.

“That may have shocked the Jewish theologians of Jesus’ time but for us today it is cause for joy,” Fr Mitchell said.