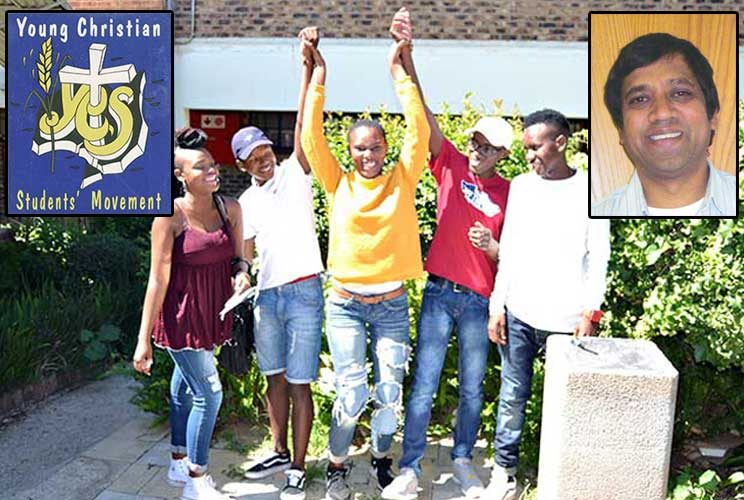 Fr Mokesh Morar has been instrumental in building up the Young Christian Students movement in South Africa.

By Zuko Masabalala – A group of students at Immaculata Secondary School in Diepkloof, Soweto, believe the experience they gained as active members of Young Christian Students was instrumental in their being elected to 2019 leadership positions at the school.

I myself, as Immaculata headboy and a YCS member, believe the movement had an influence, for over half the students in the leadership are or were members of YCS, including both head prefects (headboy and headgirl) and their deputies.

A team of 22 learners at Immaculata Secondary School were inaugurated as the new 2019 student leadership. Noticeably, 12 of the 22 are current or former YCS members.

At first, this discovery was seen as a rare case of coincidence, but upon further questioning prefects, many acknowledged that YCS had some role in their nomination and election.

“YCS has helped me grow greatly over the past three years of my membership,” commented deputy headboy Kamohelo Qhala.

“I have taken on a few leadership roles, especially in the executive of YCS as secretary,” he said.

“This has assisted in building my communication skills and commitment, and developing a critical consciousness from using the See, Judge, Act method of YCS,” the young man explained.

Many other student leaders also believe the movement helped them gain recognition within the school community, as they had improved their communication skills with their parents, and the school and Church authorities.

I believe that although it is still not 100% proven that membership of YCS played a significant role in being elected to school leadership teams, it is safe to say that this is an inspiring and encouraging development, not only for YCS members, but also for all other leaders and young people in South Africa.

YCS is an international, ecumenical student movement. Members build the leadership themselves on a strong ethical basis regarding both their communities and society at large.

The movement was started in South Africa in 1959.

Immaculata Secondary School is one of eight schools in Gauteng— situated in areas such as Soweto, the Vaal Triangle, Jo’burg CBD and Parktown—with a YCS group.

Members of the Soweto, CBD and Vaal schools came together for the first time last month at St Charles Lwanga parish in Orange Farm south of Johannesburg.

YCS is being revived in South Africa by Fr Mokesh Morar, who has tirelessly motivated and encouraged members to participate more in social, community-based, and constructive activities; be it countering bullying, cleaning up litter, or developing relationships.

From April, all Grade 12 YCS will focus on their matric academic work, and younger members will take charge of carrying on building the movement in their schools.