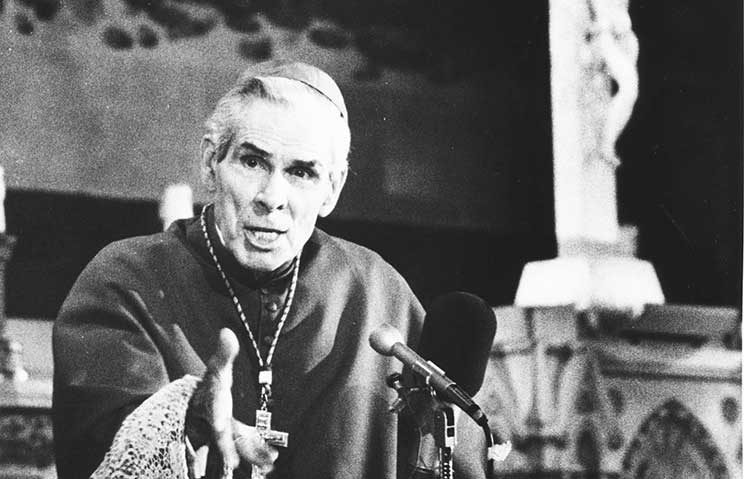 Archbishop Fulton Sheen is pictured at a pulpit giving a homily. The legal battle over his remains has ended. (Photo: CNS)

Bishop Daniel Jenky of Peoria, Illinois, announced “with great joy” that the New York Supreme Court ruled that the remains of Archbishop Fulton Sheen should be transferred from New York to his diocese.

The ruling settled a long-running dispute between the archdiocese of New York and the diocese of Peoria about who could have the TV priest’s bones.

Archbishop Sheen, a Peoria diocesan priest, gained fame in the 1950s with a prime-time television show. He died in 1979 at 84, and was entombed in the crypt at St Patrick’s cathedral in New York.

In 2016, Joan Sheen Cunningham, Archbishop Sheen’s oldest living relative, filed a petition with the courts in New York asking that his body be moved to the Peoria cathedral. She said her uncle would not have objected to his remains being transferred to Peoria.

The unanimous decision was the third time the New York court system has ruled in Ms Cunningham’s favour, as successive attempts by the diocese of New York to keep the archbishop’s remains there failed.

The Peoria diocese said it looks forward to working with the New York archdiocese to carry out the court decision to transfer of Archbishop Sheen’s remains to Peoria’s St Mary’s cathedral, where Archbishop Sheen was ordained in 1919.

The first approved miracle necessary for Archbishop Sheen’s beatification has cleared two of the three stages necessary for him to be declared “blessed”.

In September 2015, his cause was suspended indefinitely, when the archdiocese of New York denied a request from Bishop Jenky to move the archbishop’s body to Peoria, and the courts got involved.—CNS