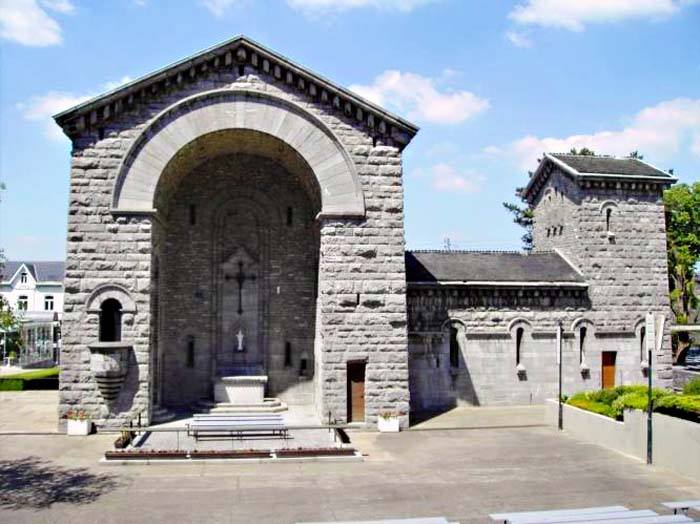 Five children reported a total of 33 apparitions of the Virgin Mary in the Belgian village of Beauraing between November 1932 and January 1933 (just before the apparitions at Banneux, which we visited last week), mostly in the garden of the local convent school.

In this apparition, Our Lady was very kindly. She wore a heart of gold on her breast, earning her the title “Virgin of the Golden Heart”. After the visions, the children went on to live normal lives. The last surviving visionary, Gilberte Degeimbre, died at 91 in 2015.

The local bishop forbade any veneration of the apparitions until investigations cleared the way for them in 1943. The apparitions were formally approved in 1949, by which time two miracles had been reported at the site.

Ten pilgrim routes, ranging in length from 100 metres to 11km, have been designed to lead to the sanctuary of Beauraing. (Photo: Beauraing Shrine)

24. Our Lady of Almudena, Madrid 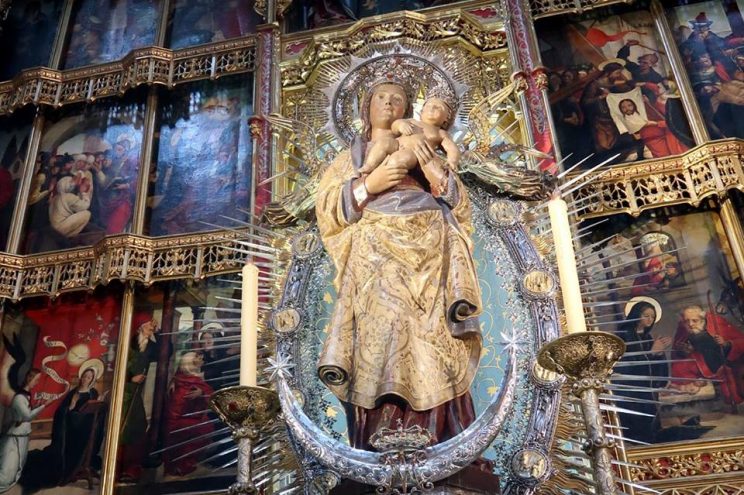 There are several statues of the Virgin Mary that had been hidden away during the Muslim conquest of Iberia in the 8th century and recovered after the reconquest in the 11th century.

The people of Madrid, then a small town near the powerful city of Toledo, remembered that their ancestors had stowed away a statue in the city walls, but they didn’t know where. After prayer to the Virgin, they were guided to the right spot. Interestingly, in naming the statue Our Lady of Almudena, they used the Arabic term for the word “citadel”.

According to pious tradition, this is another image of Mary painted by the evangelist St Luke, coming to Spain via the apostle James.

The statue was venerated for centuries at an Augustinian church and then in Blessed Sacrament church. It is now in the new Almudena cathedral, which was inaugurated only in 1992—more than 400 years after the idea of a cathedral for the Almudena first being raised.

Our Lady of Almudena is Madrid’s patron, and her feast day, November 9, is a holiday in the city. ( Photo: Günther Simmermacher) 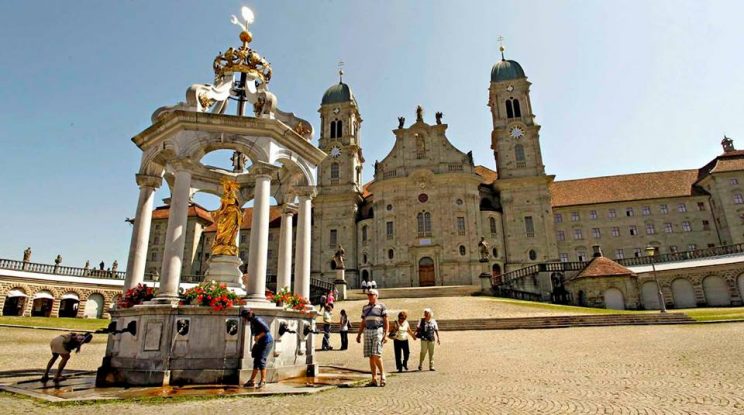 Einsiedeln has been Switzerland’s most important Marian shrine for a thousand years. A chapel enclosed in the Benedictine abbey church houses a 15th-century statue of a “Black Madonna” which replaced an icon that had been destroyed in a fire.

The icon had darkened by centuries of soot from candle smoke. In 1803 a well-meaning artist restored the statue, removing the layers of soot and rendering Mary with a light skin. The faithful were so forceful in their objection that she was promptly painted black.

The town, which is also a popular winter sports destination, was a famous stop on the Way of St James coming from central Europe, and at one point rivalled even Rome for popularity. (Photo: Arnd Wiegmann, Reuters/CNS) 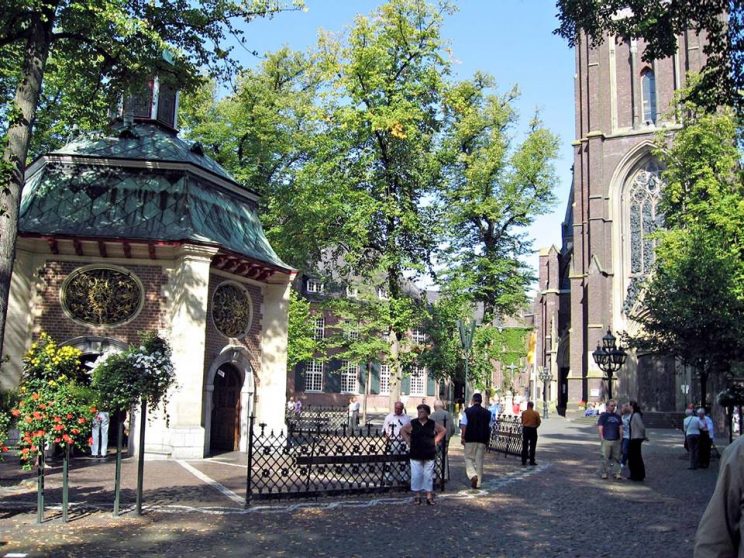 Germany’s second-biggest Marian shrine, in Kevelaer near Düsseldorf, attracts around 800,000 pilgrims a year. The devotion goes back to the devastating Thirty Years’ War.

In 1641, a Catholic named Hendrick Busman decided to build a small wayfarer’s shrine in the village when he heard a voice from above: it was the Mother of God, instructing him three times to build a small chapel there. At the same time, his wife had visions of a chapel, with an image of Our Lady in front of it. This persuaded Busman to build the chapel.

And when Busman saw soldiers from Luxembourg carrying an image of Our Lady of Graces, just as his wife had dreamt it, he bought it from them and installed it in the church (a copy of it is in the shrine of the same name in KwaZulu-Natal).

Many miracles have been reported in Kevelaer since, and the shrine is popular especially with pilgrims from the Rhineland and the Netherlands. Every year, a motorcycle pilgrimage draws several thousand leather-clad and helmeted faithful. (Photo: Thomas Schoch) 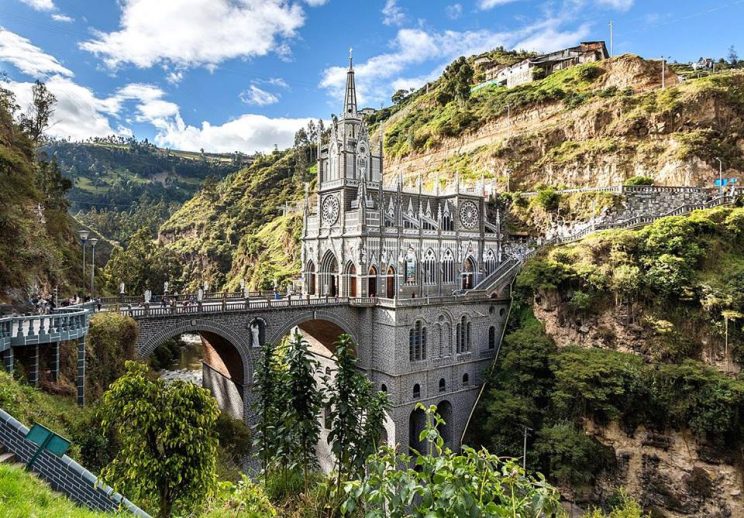 The sanctuary of Las Lajas in south-western Colombia may have the most spectacular setting of any in this series: the beautiful basilica is built inside a canyon and is reached by crossing a bridge across the gorge.

The basilica, built between 1916 and 1949, stands on the exact spot where in 1754 a woman and her deaf-mute daughter, Rosa, took refuge from a violent storm. Suddenly the mute Rosa exclaimed: “The Virgin is calling me”, as she pointed to an illuminated silhouette on the rock. Rosa and her mother kept the apparition a secret.

Soon after that Rosa died, and her mother went to pray for the child’s repose at that spot where they had taken shelter from the storm. Through that prayer, the child brought back to life.

A wooden church was built there within a couple of years of the reported miracle, and a bigger shrine in 1803. The current church was declared a minor basilica in 1994. (Photo: Diego Delso/Wikipedia)