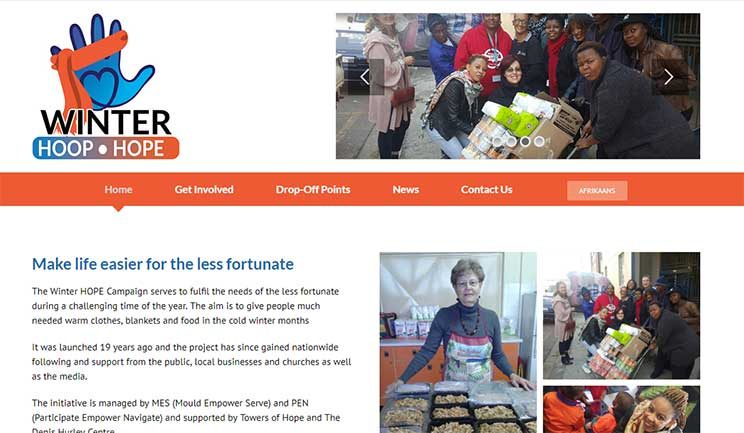 Catholic parishes around the country are being invited to participate in a major national programme to help the poor in the colder months.

Every year for 17 years the Dutch Reformed Church has organised a national campaign called Winterhoop (Afrikaans for “Hope for Winter”) in June.

While promoted nationally, the campaign is delivered locally — in each town churches sign up to be drop-off points. That means people can donate goods at these points, and the churches can hand them on to people in need and/or to organisations who can make use of them.

Winterhoop specifies what it wants people to donate: non-perishable foods, blankets, warm clothes and so on.

Each participating church has to be willing in June to be a drop-off point (at hours it decides), to sort what is donated, to store items for up to one month, and to allow organisations in the area to collect items.

The Denis Hurley Centre (DHC) in Durban is leading Winterhoop for KwaZulu-Natal.

“We are encouraging Catholic churches around the country to get involved,” said DHC director Raymond Perrier.

“While there is a reasonable network already of the Dutch Reformed Church and other churches, the organisers are looking to expand it further,” he said.

“The breadth of the Catholic network could help make this a truly national campaign — and would also be a wonderful ecumenical gesture,” Mr Perrier said. He added that it would make Archbishop Denis Hurley proud, referring to the late head of Durban archdiocese after whom the DHC is named.

“This would be a great way to encourage people to give,” he said.

To find out more about being a drop-off point, contact aloma@mes.org.za or see www.winterhoop.org