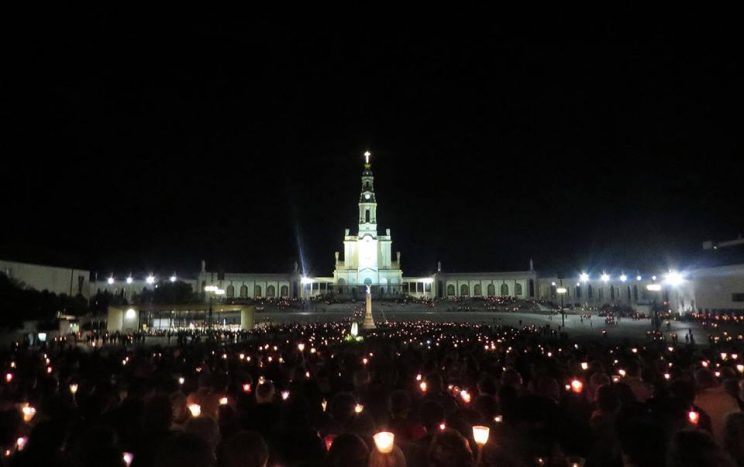 An estimated 9 million pilgrims came to Fatima in 2017 for the centenary year of the apparitions there, including two Southern Cross pilgrimages. In normal years, around 5 million visit the sanctuary that now occupies the field on which five of the six apparitions to three shepherd children took place between May and October 1917.

The last apparition drew a crowd of tens of thousand to see if the miracle which the children had promised would in fact take place. The Miracle of the Dancing Sun convinced them, and many others, that the children were telling the truth about “the Lady more brilliant than the sun”.

Within weeks a small chapel was built on the site, and it soon drew great crowds of pilgrims. In the late 1920s a hospice was built there and the Stations of the Cross were erected before construction of the basilica began in 1929. The Catholic Church declared the apparitions “worthy of belief” in 1930.

St John Paul II ascribed his survival of the assassination attempt on him on May 13, 1981, to the intervention of Our Lady of Fatima, whose feast it was that day. He later had the bullet that nearly killed him placed into her crown on the statue at the sanctuary. 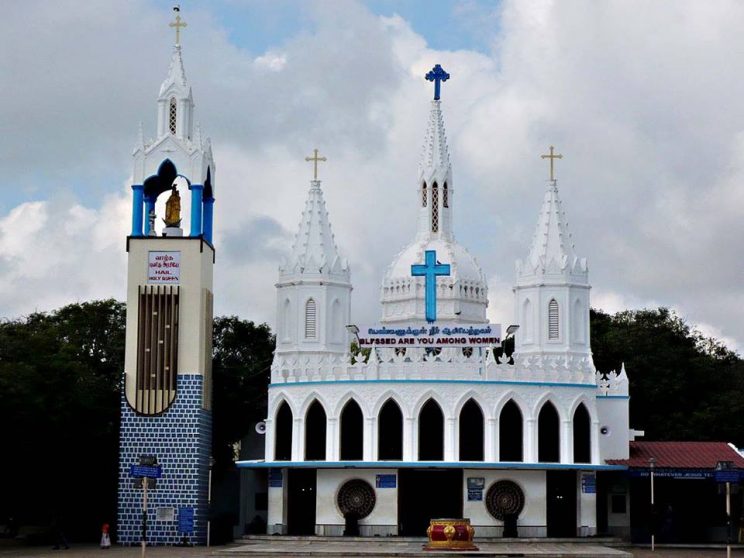 Not very well known in the West, Velankanni is known as the “Lourdes of the East”, on account of the many miraculous healings reported there. Every year on its feast day alone, about 2 million pilgrims visit the shrine in the eastern Indian state of Tamil Nadu.

Velankanni was the site of three miraculous Marian apparitions in around 1600: one (with Jesus) to a shepherd boy, another involving the healing of a lame buttermilk vendor, and the third saving Portuguese sailors in a violent storm in the Bay of Bengal.

It was the Portuguese seafarers who in thanksgiving first built a church there, which has been gradually expanded to eventually be declared a basilica in 1962. Quite plain in daylight, at night the basilica of Our Lady of Good Health is lit up in bright colours.

The Holy See has not approved the apparitions since they are recorded only by oral tradition, but Velankanni is an approved site of pilgrimage. It is also visited by many Hindus and Muslims. (Photo: BrownyCat/Wikipedia) 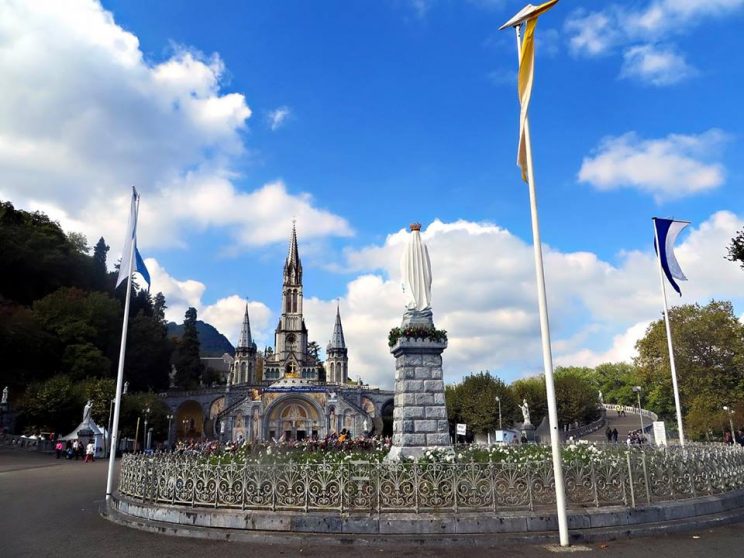 Lourdes is Europe’s biggest Marian pilgrimage destination. While the town outside the shrine is commercialised, the sanctuary itself is free of mammon and filled with a spirit of prayer and holiness—two worlds existing side by side.

The devotion goes back to 1858 when the Virgin appeared 18 times to the 14 year old peasant girl Bernadette Soubirous near the south-western village of Lourdes.

Our Lady, who described herself as the Immaculate Conception (four years after the dogma was proclaimed by Pope Pius IX), guided Bernadette to a spring which has become the source of the world’s most famous healing waters. Tens of thousands of miracles have been reported by people recovered from medical conditions; in all that time, the Vatican has cautiously approved, after long investigations, “only” 70 of them.

After initial resistance, veneration was permitted by 1862. Construction for the basilica began in 1870. St Bernadette, who became a nun in Nevers in central France and died there at 35 in 1875, was canonised in 1933. In the 1943 film ‘The Song of Bernadette’, she was played by Jennifer Jones, who won an Oscar for her role. 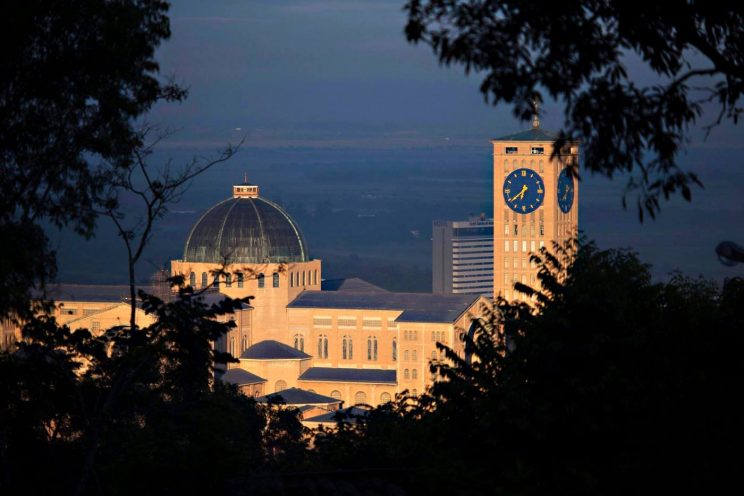 Pope Francis’ first foreign trip as pontiff was to World Youth Day 2013 in Rio de Janeiro, Brazil. Before he went to Rio, he visited the shrine of Our Lady of Aparecida in São Paulo state.

The shrine is little-known outside South America but central to the faith of that continent. With around 8 million pilgrims a year, it is the world’s second-most popular Marian shrine.

Our Lady of Aparecida is the place of the final Black Madonna in our series on Marian shrines. This Black Madonna is a clay statue of Our Lady of the Immaculate Conception which fishermen retrieved in 1717 from the Paraíba river. Having fished out the headless statue and then its head, they prayed to the Blessed Virgin for a good catch: their prayer was granted in abundance.

Initially kept in the home of one of the fishermen and then in a small chapel he built, the statue soon was widely venerated, especially by Afro-Brazilians, and miracles were attributed to prayers before it.

By 1745, the statue had its own church. By 1934 construction for a bigger church began. In 1955, under the guidance of Redemptorists from Altötting (whose Marian shrine featured previously at #16), the world’s biggest Marian pilgrim church, holding 45000 people, was built.

In 1930, Pope Pius XI declared the Immaculate Conception under the title of Our Lady of Aparecida as the patroness of Brazil.

The small statue probably was made around 1650 and was underwater for decades, hence its discolouration. It has survived two attacks: in 1978, it was stolen from the shrine and broken before it was recovered; and in 1995 a crazed Protestant minister insulted and vandalised it on live TV.

An estimated 13 million people came to the shrine in 2017 to mark the 300th anniversary of the statue’s finding. (Photo: Roosevelt Cassio/CNS) 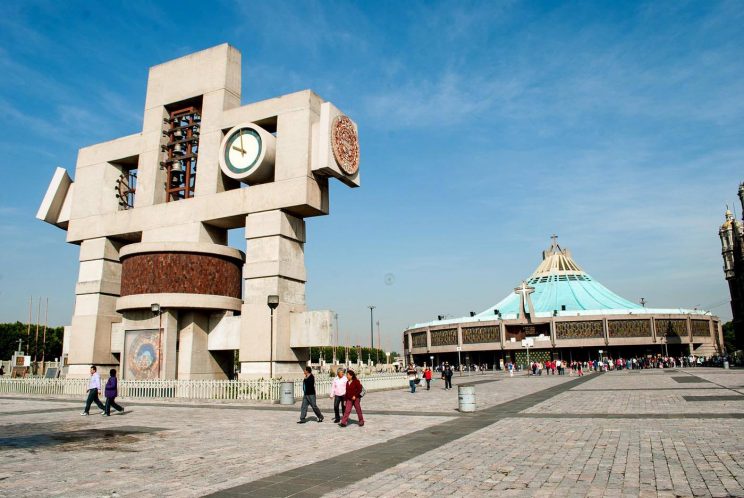 The world’s most popular Marian shrine is Guadalupe in Mexico City, which attracts around 20 million pilgrims a year.

In 1531 the Virgin Mary appeared four times to an indigenous man named Juan Diego Cuauhtlatoatzin: like him, she had the facial features of the Aztecs, and she addressed him (and in another apparition, his uncle) in his native Nahuatl language.

When Juan Diego spoke to the local bishop about the apparition, an image of La Morenita (the dark-skinned) inexplicably appeared on the peasant’s tilma, or cloak. That is the image we know as Our Lady of Guadalupe. The tilma became not only a potent religious symbol for Mexicans, but also of the struggle for independence from Spain.

Although St Juan Diego was canonised in 2002, there have been many, even in the Church and including a former abbot of the shrine’s basilica, who dispute that he ever existed.

Until the construction in 1976 of the huge basilica which can hold 40000 people, a small church served as the shrine. (Photo: P. Mudarra)