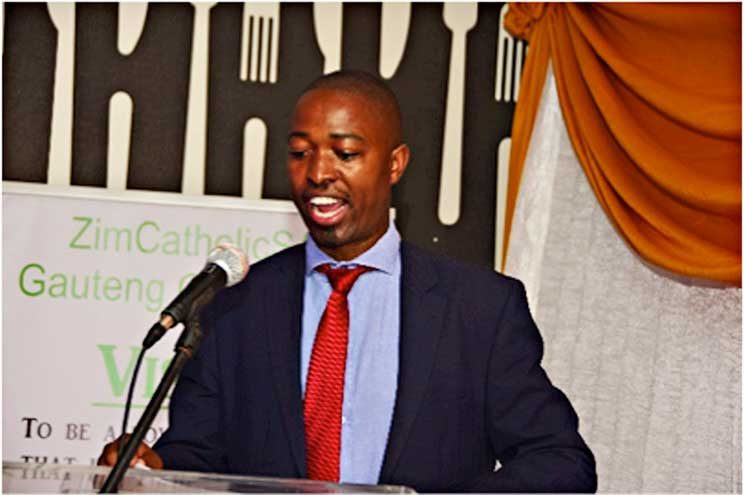 Dr Shingi Mutanga, executive chair of ZimCatholicsSA, called for unity among Zimbabweans at a dinner held in Johannesburg by the organisation.

Zimbabweans in South Africa have been called on to unite, regardless of tribe, religion, and political affiliation.

The challenge was made by Fr Jerome Nyathi, chaplain of the Zimbabwe Catholics’ Community in South Africa (ZimCatholicsSA), at a black-tie dinner at Montecasino near Johannesburg.

The dinner was a platform for dialogue on the Zimbabwe situation.

In a pastoral letter, the Zimbabwe Catholic Bishops’ Conference said “Zimbabwe is burning, its economy is hurting, and its people are suffering”. The bishops called for rebuilding trust, confidence, and stability.

ZimCatholicsSA meets every last Sunday of the month at St Francis of Assisi church in Yeoville, Johannesburg, and every second Sunday at Sacred Heart cathedral in Pretoria.

In his opening statement at the dinner, Fr Nyathi explained that the backdrop to the event was Catholic Social Teachings. He called on Zimbabweans to accommodate each other as human beings first, ahead of circumstantial differences.

Referring to the Church’s process of electing a new pope in conclave, the bishop said: “If needs be, let us lock the leaders in one room until they come up with solutions.”

Panel A was on the economy and development. Issues Zimbabwean industries are grappling with were identified and possible solutions tabled. All Zimbabweans were called on help revitalise the economy.

Panel B was on Zimbabwe’s political situation. Key points included the need for the ruling party and opposition parties to take responsibility for what the country faces. Independent mediation to address the loss of lives due to political unrest, akin to South Africa’s Truth and Reconciliation Commission, was suggested.

A declaration of matters discussed during the dinner will be submitted to decision-making bodies in the business and political spheres. The declaration is on ZimCatholicsSA’s website (www.zimcatholicsa.org.za).

God is the great storyteller. Gods’ story is one that begins with the Word that speaks order out of the...