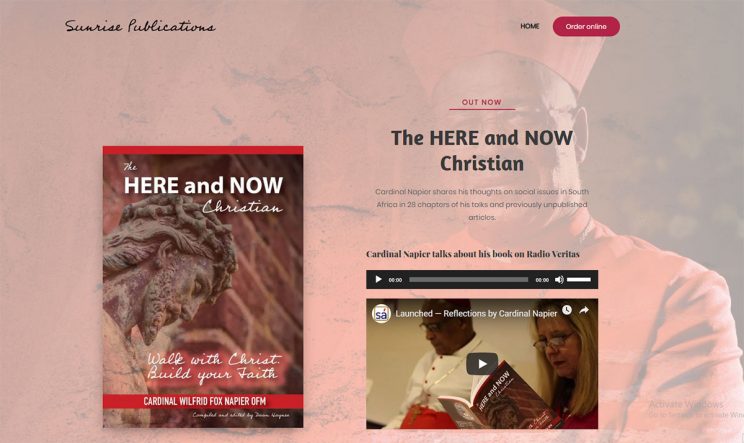 Cardinal Wilfrid Napier hopes his new book, The Here and Now Christian, will be bought not just for curiosity’s sake, but that it will inspire people about the issues raised.

The Here and Now Christian, which has been arranged into 28 chapters, gives the cardinal’s response to social issues, reflection on how they affect society, and suggestions of actions .

Speaking to Radio Veritas’ Khanya Litabe, Cardinal Napier recalled how the inspiration for the book’s title came about.

“One of the deacons [in the archdiocese of Durban] was giving a catechism class to the confirmation kids and was explaining what the bishop was going to do. The thought then crossed his mind as to whether these kids even know who their archbishop is? So he asked the question, ‘Do you know who the archbishop of Durban is?’, and a hand shot up and immediately said Desmond Tutu. The deacon was so taken aback by the response that he said he has to do something about this.”

That’s when a group of Catholics in Durban started Catholics Awake.

The aim of the group was to inform the parishes of Durban archdiocese about the life and activities of their archbishop.

They held meetings and functions to promote the group and Cardinal Napier was asked to give talks at these meetings.

“The very first function I was called to speak at was entitled ‘The Here and Now’—and that was how the book was born and subsequently got its title,” the cardinal explained.

In his book, the cardinal speaks about violence in South Africa and suggests: “An essential ingredient for a good life in a good human society is good people living in good families. That I think is the secret, that’s the core of how we’re going to get South Africa turned around,” he said.

“Pope Francis after his election, and after having listened very carefully during the pre-conclave talks where the cardinals shared their concerns about the world, the state of their country and Church, heard this call for renewal and for reform and the first things he said was, ‘Let’s have a synod about marriage and the family’,” Cardinal Napier said.

“This shows that he clearly sees it at the starting point for any renewal or reform. If you want good strong family’s you have to have good strong marriages. Marriage and the family have to really be the core interest of our churches.”

In his Radio Veritas interview, Cardinal Napier expressed his thanks to Dawn Haynes, who compiled and edited the book, and Rob Riedlinger, who produced it.

“They’ve laid the book out beautifully, with a little introduction, where it gives the situation of how it fits into what was going on either in my life or the country or the Church, and then right at the end, there are practical suggestions on how you could apply what you’ve just read to situations around you,” Cardinal Napier said in the Radio Veritas interview.

The Here and Now Christian is published by Sunrise Publications and can be ordered online at www.hereandnowchristian.co.za for R200.

A discount is offered on bulk orders, and proceeds from the book will benefit the Napier Centre 4 Healing, an aftercare facility for post-rehab addiction residents.

Tags: The Here and Now Christian