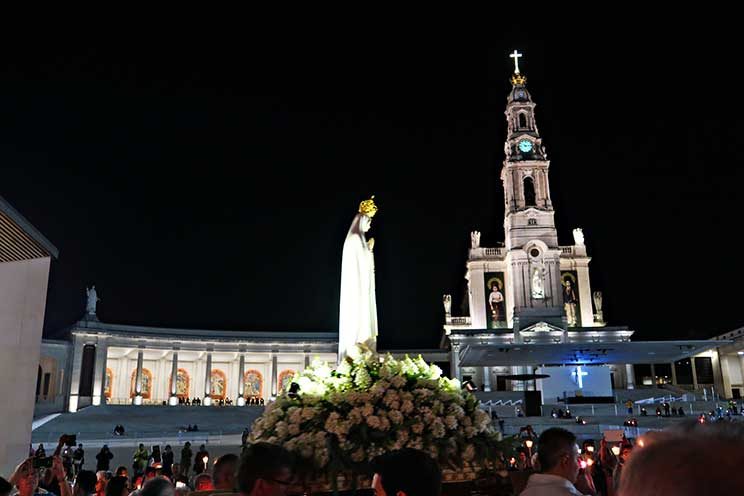 The statue of Our Lady of Fatima in candlelight procession at the shrine dedicated to her in Portugal, with the basilica of Our Lady of the Rosary in the background. (Photo: Günther Simmermacher)

The Five Saturdays devotion has been adopted in many parishes in South Africa. PAUL DE MARCO explains the background of this personal devotion.

We’ve all heard of Fatima and know something about the apparitions that occurred there a hundred years ago.

Three children—Lucia, Jacinta and Francisco—claimed to have seen an apparition of the Virgin Mary, and over the course of six visits between May 13 and October 13, 1917, they were given revelations which had a profound effect on world history.

At the time, Europe was embroiled in the horror of World War I, although the sleepy town of Fatima had been largely untouched by the conflict.

On May 13, the three children led a few dozen sheep out to pasture before climbing up a hillside to play, when they were startled by a brilliant flash of light and an apparition of Mary.

This was the first of six apparitions during which Our Lady explained how the sins of mankind were offending God, saying that many souls were going to hell, and that we should pray for the conversion of sinners.

At her third visit on July 13, 1917, Mary showed the children a terrifying vision of hell to show them the reality of this state of existence.

She gave an assurance that World War I would soon end, but warned that unless mankind stopped sinning the world would be punished through a war worse than the current one.

Mary was highly specific, saying that this war would break out during the pontificate of Pius XI, and she said that a great sign would be given that this chastisement was imminent, which would be “a night illumined by an unknown light”.

She said that the Church would be persecuted and that the Holy Father would have much to suffer, and that Russia would spread her errors throughout the world.

To prevent this from happening, and to assure peace in the world, Mary said that she would later return to ask for the consecration of Russia to her Immaculate Heart, and the establishment of a new devotion—The Communion of Reparation on the First Five Saturdays.

As had been the case with Bernadette at Lourdes in 1858, the villagers and clergy initially refused to believe the children, and so Mary said that she would perform a miracle in October “for all to see and believe”.

The greatest miracle in modern history— the “Miracle of the Sun” of October 13, 1917—was witnessed by an enormous crowd, estimated at 70000 people, who saw the sun perform movements in the sky which were impossible in terms of physics or astronomy.

Dr Almeida Garrett, professor of science at Coimbra University, was present that day and this is part of what he wrote to describe the event:

“Then, suddenly, one heard a clamour, a cry of anguish breaking from all the people. The sun, whirling wildly, seemed all at once to loosen itself from the firmament and, blood red, advance threateningly upon the earth as if to crush us with its huge and fiery weight.

“The sensation during those moments was truly terrible. I must declare that never, before or after October 13, have I observed similar atmospheric or solar phenomena.”

Fr Joaquin Laurenco also described what he saw that day: “I looked fixedly at the sun, which seemed pale and did not hurt my eyes. Looking like a ball of snow, revolving on itself, it suddenly seemed to come down in a zigzag, menacing the earth. Terrified, I ran and hid myself among the people, who were weeping and expecting the end of the world at any moment.”

Dr Domingos Pinto Coelho wrote an article on the event for the Ordem newspaper:

“The sun, at one moment surrounded with scarlet flame, at another aureoled in yellow and deep purple, seemed to be in an exceedingly swift and whirling movement, at times appearing to be loosened from the sky and to be approaching the earth, strongly radiating heat.”

Alfredo de Silva Santos was also present that day. He wrote: “The sun began to move and at a certain moment appeared to be detached from the sky and about to hurtle on us like a wheel of flame. My wife— we had been married only a short time—fainted. I fell on my knees oblivious of everything, and when I got up I don’t know what I said. I think I began to cry out like the others.”

Two of the children died within two years of the last apparition, with Francisco passing away at the age of ten in 1919, and Jacinta the following year at the age of nine. Both succumbed to the Spanish flu pandemic which claimed at least 50 million lives.

Lucia survived and later joined the religious life, and it was while she was at the Dorothean convent in Pontevedra, Spain, that Our Lady appeared to her with the Child Jesus on December 10, 1925.

Our Lady said to her: “Look, my daughter, at my heart, surrounded with thorns with which ungrateful men pierce me at every moment by their blasphemies and ingratitude. You can at least try to console me and say that I promise to assist at the hour of death, with the graces necessary for salvation, all those who, for five consecutive months, shall confess, receive Holy Communion, recite five decades of the Rosary, and keep me company for fifteen minutes while meditating on the 15 mysteries of the Rosary, with the intention of making reparation to me.”

Our Lady again appeared to Lucia on June 13, 1929, and said to her: “The moment has come in which God asks the Holy Father to make, in union with all the bishops of the world, the consecration of Russia to my Immaculate Heart, promising to save it by this means. So numerous are the souls which the justice of God condemns for sins committed against me, that I come to ask for reparation. Sacrifice yourself for this intention and pray.”

The warning that Our Lady made came to pass, and on January 25, 1938, during the pontificate of Pius XI, the night skies from Europe to America were ablaze in red. Scientists put it down to being the greatest Aurora Borealis in recorded history.

Hitler annexed Austria just six weeks later and the world was on the path to a war that would claim 85 million lives.

Later, Russia did spread her errors throughout the world and persecuted the Church. The Holy Father also suffered, with Pope John Paul II being shot on May 13 1981—the anniversary of the first apparition at Fatima!

The pope was convinced that Our Lady had intervened to save him, and on May 13 the following year he visited Fatima and consecrated the whole world to the Immaculate Heart of Mary.

As a sign of his gratitude, Pope John Paul gave the bullet that injured him in the assassination attempt to the Fatima shrine, to be placed in the crown of the statue of Our Lady of Fatima. It was a perfect fit.

He followed this up with the specific consecration of Russia on March 25, 1984.

There are wonderful benefits to us as individuals and to our world by making the devotion Our Lady called for.

To make the devotion, for five consecutive Saturdays we must attend confession, receive Holy Communion, recite five decades of the Rosary, and also spend another 15 minutes meditating on the 15 mysteries of the Rosary, with the intention of making reparation to Mary for the sins against her.

These are sins regarding her Immaculate Conception, her perpetual virginity, her Divine Maternity, the sin of sowing in the hearts of children indifference or scorn towards Mary, and blasphemies regarding the treatment of images of her.

Mary has left a wonderful promise for all those who make this devotion, which is that she will assist at the hour of death with the graces required for their salvation. What more could we possibly ask for?