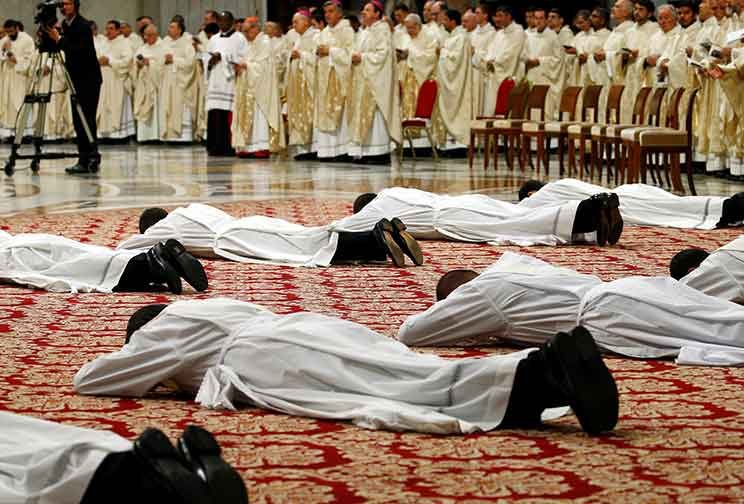 Candidates for the priesthood lie on the floor as Pope Francis celebrates an ordination Mass in St. Peter’s Basilica at the Vatican. The pope ordained 19 new priests. (CNS photo/Yara Nardi, Reuters)

Fr Dennis C Ongansie,Oudtshoorn – In the wake of the Vatican summit on sexual abuse and amidst the flood of media coverage, a picture of an intricate tapestry of possible causes is emerging.

The concept and exercise of power in the Church, clericalism and the screening and formation of candidates for the priesthood have rightly been highlighted as enabling an atmosphere of abuse and cover-up by clergy. A much-needed and healthy debate has ensued.

I write this letter in response to the views expressed by Professor Garth Abraham in the Mail & Guardian as summarised in The Southern Cross under the heading “Training of priests to see faithful as without rights part of the roots of abuse”. It set off a Facebook discussion to which several priests have offered a counter-view, from a South African perspective.

As I do not claim to be familiar with trends in training priests elsewhere in the world, I will limit my response to my personal experience of priestly training and formation in South Africa these past 20 years.

The history and development of seminaries can be easily researched. However, it will always lead back to that original group of Christ and the Twelve who lived together, in what can be regarded as the original apprenticeship in Christian discipleship and ministry.

Jesus often called the Twelve away from the other disciples and the crowds, to enhance their own understanding and ministry. This teaching included content, methodology, and “spirit” or attitude.

The Twelve were not isolated from the population. There were frequent interactions, and Christ based his teachings on the concrete lives of his contemporaries.

This is ultimately the origin of and model for seminary formation.

In my own experience of seminary formation in South Africa, I do not recognise a “quasi monastic isolation from the rest of society”.

Seminarians are exposed daily to people from all walks of life. Private students are welcome to study alongside seminarians, lecturers from academic institutions are employed, the faithful are welcome to join the seminary community for Sunday worship and fellowship afterwards, and this results in deep and lasting friendships.

Unlike the monastic model, seminarians today do pastoral work during academic breaks, working alongside lay leaders in parishes. Furthermore, seminarians, especially diocesan, remain rooted in their families, communities and cultures.

During the six-month pastoral internship, a lay support group is appointed to accompany the intern and to offer guidance as well as a balanced opinion about his suitability for ministry to his formators.

Never, in all my years of seminary formation, have I been given the impression that the laity is without rights. Their rights were rather imprinted on us and we were often addressed about the mission statement of St John Vianney Seminary: To form integrated prayerful and servant priests.

Seminarians are acutely aware of the perceived shortcomings of the formation system, and I was too.  Fortunately, a lack of awareness of and disregard for Christ’s faithful never featured. Among my peers, I see the vibrant, passionate servant priests many have become, testimony to their formation.

The formation staff of the national seminary and the seminaries department of the SACBC are in a much better position than I to enlighten readers about the efforts and progress made to form priests for the needs today’s Church.

As we continue to discern our response to the abuse crises, let us walk the road of healing unified as the people of God, comprised of the priesthood of all the baptised as well as the ministerial priesthood, with the former being the source and raison d’être of the latter.