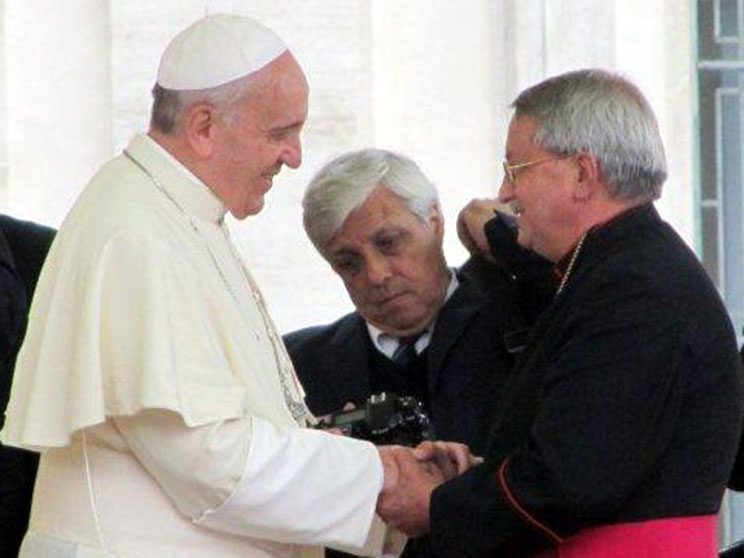 Bishop Giuseppe Sandri of Witbank will be remembered as a fine pastor with an irrepressible sense of humour.

Bishop Sandri died at the age of 72 on Ascension Thursday, May 30, at Midstream Mediclinic in Centurion, where he had been hospitalised for two months for a stomach ailment.

Born in Faedo, northern Italy, on August 26, 1946, he made his first profession as a Comboni Missionary of the Heart of Jesus in 1968 and his solemn vows exactly three years later.

From 1993-98 he served as provincial of the Comboni Missionaries in South Africa and from 1999-2007 as secretary-general of his congregation in Rome.

Pope Benedict XVI named him bishop of Witbank on November 6, 2009, with the episcopal ordination taking place on January 31, 2010.

He was the second Comboni bishop of the diocese, after Bishop Anton Reiterer (1956-83).

Bishop Sandri served the bishops’ conference as liaison bishop for Justice & Peace, and then as chair of board Catholic Institute of Education from (2013-15) and president of the Catholic Board of Education (2016-18).

“His commitment, wisdom and generous spirit was a source of support to us all,” the CIE said.

“Bishop Sandri was a great pastor, a true father to his priests, a man imbued with the spirit of justice, and a good friend of this newspaper,” said GüntherSimmermacher, editor of The Southern Cross.

“He was going to lead our pilgrimage to France in October. It will still go ahead, and we will remember him in a special way on that journey,” he said.

“Those who were with him on the Southern Cross pilgrimage to the Holy Land and Italy in September 2013 spoke so highly of him as a man of faith and good humour,” Mr Simmermacher said.

“Bishop Sandri passed away in the early morning of the feast of the Ascension. God had a good sense of timing for his faithful servant.”

The pilgrimage to France will now be led by Fr Lawrence Ndlovu of Johannesburg, who knew Bishop Sandri well.

“I got to know Bishop Sandri when he was one of the bishops in the liturgy commission of the SACBC in which I serve as member. He was so funny and was always off topic. He was a wonderful man,” said Fr Ndlovu.

Bishop Victor Phalana of Klerksdorp said that he had asked Bishop Sandri last year to help with the translations of liturgical books into Sepedi and Xitsonga. Bishop Sandri had said that he was just about to retire and promised to dedicate his retirement to that work.

Bishop Sandri’s funeral was held on June 6 at 10:00 at the Emalahleni City Hall, followed by his burial in Witbank’s cathedral of Christ the King.