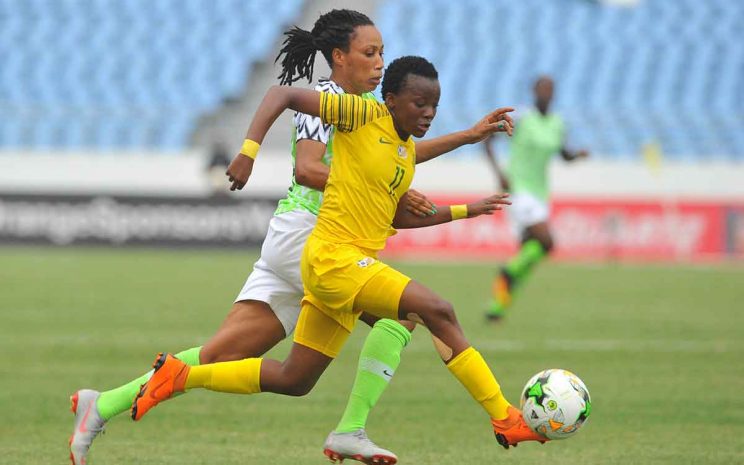 Thembi Kgatlana is a star player for the national women’s team, known as Banyana Banyana.

The centre-forward from Johannesburg’s West Rand is a parishioner of Our Lady of Africa in Mohlakeng township.

The 23-year-old, the current African Woman Player of the Year, currently plies her trade in the Chinese Women’s Super League with Beijing Phoenix. She is one of only two South African players in the top-flight Asian women’s league.

She believes that her talent is God-given, and credits her Catholic faith for playing a significant role in her success, on and off the pitch.

“My Catholic faith has a huge role in my life because whatever I do or engage in, I start with a prayer,” Ms Kgatlana told The Southern Cross.

“Whether it is a single word or a long intense prayer: Every time before I step onto the field of play for a match or a training session, I always pray and call upon the Virgin Mary to guide and lead me.”

She noted that her parish has also played a crucial part in her career’s progression.

“My parish has been my strongest support base. They always pray for me. They have helped me with votes when necessary, and they have encouraged me to keep using my talent to glorify God by being a good role model to the youth of the Church.”

Ms Kgatlana is particularly enthusiastic about her role as a motivator to the youth of her parish, and her community at large.

She does this alongside her fellow Our Lady of Africa parishioner, South African track and athletics team member Itumeleng Sesiko, who is 20 years old.

“It is a privilege to use my success, and that of other athletes like Itumeleng, to motivate the youth of our church, our community and South Africa at large to be active, and to make use of their God-given talents to make a difference in their lives, their families’ lives and those of their communities,” Ms Kgatlana said.

She issued a message to girls and young women especially: “Focus on your dreams because they are valid. And by focusing on your dream and purpose you will be letting God lead you to where he intends you to serve him.”

Among all her achievements, Ms Kgatlana rates playing for the national team as the enduring pinnacle of her career—one which she hopes to spur on to greater heights at the World Cup.

“I aim to play a significant role in Banyana Banyana’s overall performance at the World Cup. “It is our first time in the World Cup for the national women’s team, and I hope to leave a lasting mark for our country.”

Last year was a big year in her career, having scooped up every top prize on offer in continental African women’s football, including Cup of Nations Player of the Tournament Award.

The World Cup takes place from June 7 to July 7. South Africa is drawn in a tough group with twice-winners Germany, China and Spain.