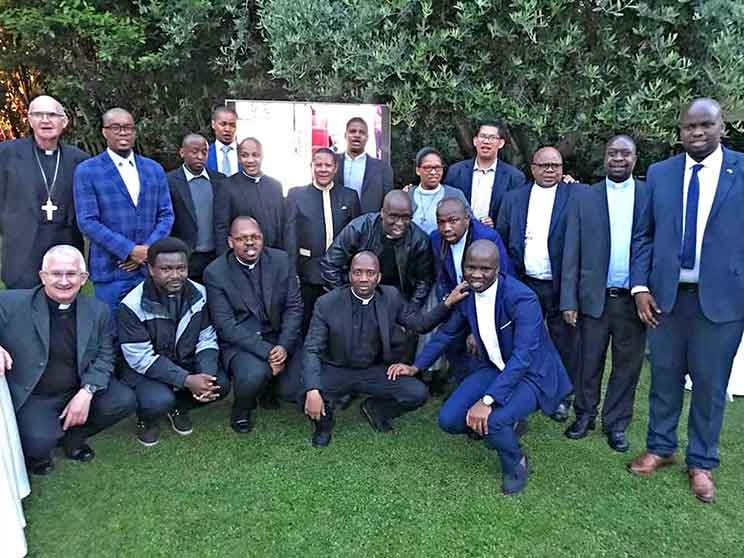 South African ambassador to the Vatican George Johannes (back centre), Archbishop Stephen Brislin (back left), Bishop Duncan Tsoke (back third from right) with a group of fellow South Africans living in Rome at a special event marking 25 years of democratic South Africa and 25 years of diplomatic relations with the Holy See.

Joining the celebration were Archbishop Stephen Brislin of Cape Town and Bishop Duncan Tsoke, auxiliary bishop in Johannesburg, who were in Rome for meetings.

Mr Johannes said the event marked two milestones: the unforgettable year of 1994, when South Africans stood in long queues to vote for their very first democratic government; and 25 years of diplomatic relations between South Africa and the Holy See.

Previously the Holy See had no relations with South Africa. Pope John Paul II was known to be a fervent opponent of apartheid.

From 2009-15, Mr Johannes was the ambassador to Switzerland, from where he maintained diplomatic relations with the Vatican State. He arrived in Rome in May 2017, taking his position as the first permanent ambassador of South Africa to the Holy See.

“South Africa’s decision to have a permanent embassy to the Holy See is a reflection of our government’s commitment to consolidating and elevating our relations with the Holy See into a powerful and strategic partnership,” Mr Johannes said.

He noted that the embassy is working towards deepening cooperation in all spheres with Holy See institutions, among them the fight against HIV/Aids, poverty eradication, and peace mediation.

“We fully support Pope Francis’ call to build bridges and assist our human family wherever we can,” he added.

The aim is respecting each other, promoting our common, integral humanity, and making a lasting contribution to the human family,” Mr Johannes noted.

The ambassador also confirmed the South African government’s commitment to fighting abuse of women and children, and taking care of the poor and elderly.

Referring to peace in the world, Mr Johannes appealed to other countries to abandon their nuclear and chemical weapons, thereby following the example of a decision made by South Africa in 1995.