CWD: May this Agency Rise from the Ashes 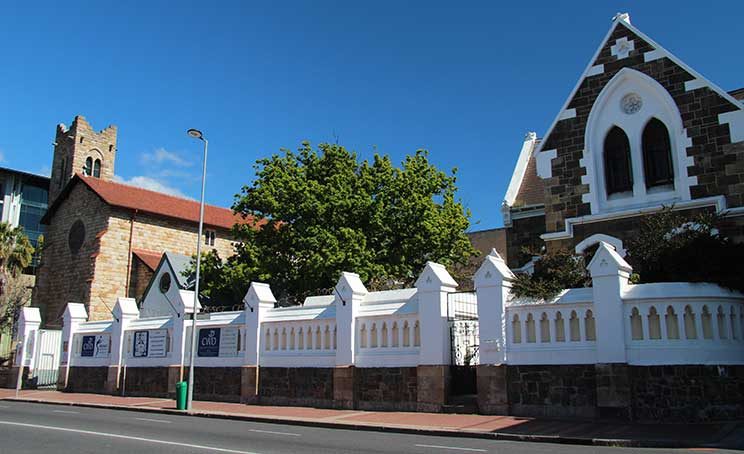 My personal association with Catholic Welfare & Development (CWD)—the welfare agency of the archdiocese of Cape Town which had to close its doors in November—makes me think of the 1980s.

It calls to mind the mass movement from Ciskei and Transkei into informal settlements around Cape Town, the troubles at Old Crossroads and KTC, the burnings and bulldozers and displacement of people, the 1976 student revolt reigniting in the streets and classrooms of cities and towns.

This was a time of great upheaval that required a bold response from CWD with frontline relief work — blankets, plastic, food, shelter and solidarity with a battered and hounded people.

The emergence of CWD coincided with a time of transforming change for the Church, the nation and local communities as the country moved through protest and turmoil to that historic moment of convergence in April 1994.

That first democratic election and the swearing-in of Nelson Mandela as South Africa’s first representative president was the  good news. That was soon followed by the harsh realities of complex and difficult transition characterised by unemployment, violent crime and corruption, and the difficult, frustrating job of meeting expectations and basic needs.

Throughout this period CWD was an active and caring partner in efforts to build up a new society woven together as a constitutional democracy that would overcome the bad news.

Along the way it did splendid work, some visible and some not so visible, creating memories that illuminate the past.

Support from the Church

The spiritual scaffolding has been matched by the commitment of its staff, the generosity of local Catholics, and the magnificent solidarity of Catholic donor agencies from overseas who understood what had to be done to build up a society free of apartheid and racism. Leadership and support of such quality makes things possible.

Of immense importance was CWD’s breaking new ground in making it possible for laity, religious and clergy to work together in a shared mission.

The agency got going at a time when several religious communities were moving into outreach, exploring new ways of serving the poor and deprived.

This collaboration shows what can be done when the local Church community joins forces—and passion—to live out the Church’s option for the poor and to be a community serving humanity in the spirit of Christ.

CWD developed a close relationship with grassroots communities which enabled it to recognise and respond to the harsh realities and causes of their living conditions.

And because it understood the value of networking with organisations sharing an affinity of interests, CWD—as a “thinking agency”—was able to grow into a major NGO involved in welfare and development. That work helped give birth to the groundbreaking Rural Development Support Programme (RDSP), to DOCKDA Development Agency (dioceses of Oudtshoorn, Cape Town, Keimoes and De Aar) and to Youth Unlimited in partnership with the archdiocese of Cape Town, Salesian Institute, RDSP, St Kizito and Sizanani Outreach Programme at Nkandla, KwaZulu-Natal. 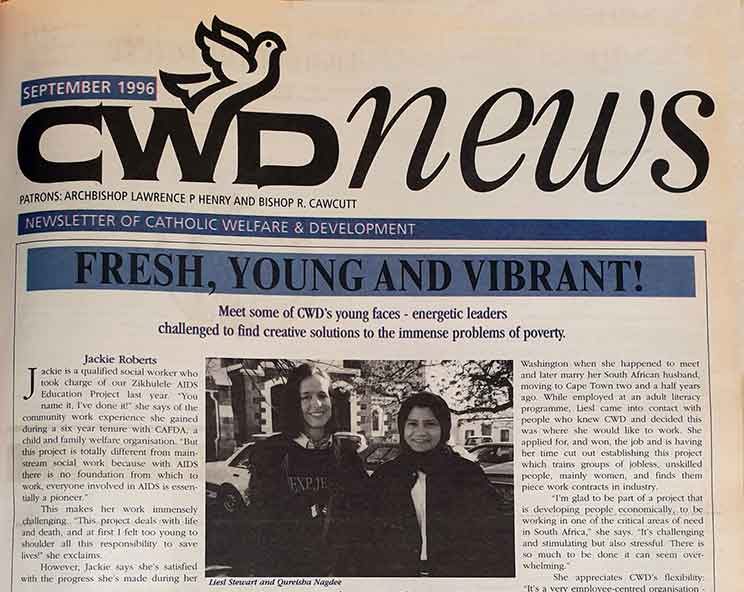 A supplement of the CWD News in The Southern Cross in September 1996.

In the tough business of fund-raising, CWD encouraged a better understanding of the theology of giving.

While the wider Church in South Africa had the profound task of educating the faithful in social justice, CWD had to conscientise them to give in a Christian context—to understand why we give and why we receive.

In development and welfare work, justice and compassion go together.

Then there was the day Peter Templeton told us of a young man arriving at his desk late one afternoon. He was desperate for help.

The man had Aids, his family had shunned him, and he had nowhere to go with his sole possessions—his car, his clothing and his dog.

A stream was flowing that led into the SACBC Aids Office session on “Responsibility in a Time of Aids” in February 2003, and the launch of its comprehensive Aids outreach at Regina Mundi church in Moroka, Soweto, on January 30, 2005, attended by 10000 faithful.

From those years the agency had a special affection for two other long-serving board members: Sr Eleonora Dittrich of Schoenstatt and Nello Battiston, who represented the St Vincent de Paul Society for many years until he retired in 1999.

Peter Templeton left CWD at the end of 1998 to start Goedgedacht Trust to help alleviate rural poverty. He was succeeded as coordinator by Jasper Walsh, Lungisa Huna, Malcolm Salida and Kevin Roussel. 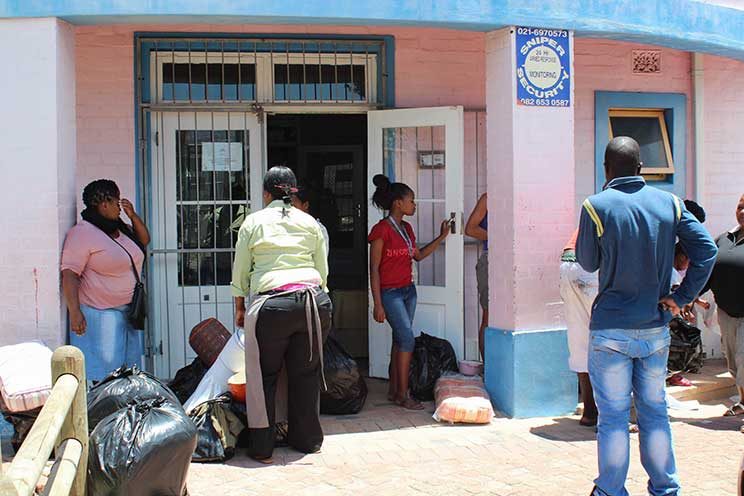 The release of Mr Mandela and the birth of the “new South Africa” ignited a surge of new hope in communities served by the agency. However, in spite of its best intentions and promises of “a better life for all”, the new government was unable to provide real solutions to some of the problems it inherited from the apartheid regime.

Poverty, unemployment and the lack of facilities in impoverished communities remain an oppressive reality for millions of people.

In such a situation, the work of CWD remained both crucial and relevant.

The initial idea for this two-part narrative began as my “rest in peace” for CWD. But when we recently watched Notre Dame cathedral in Paris burning, and with it hearts around the world, “rest in peace” sounded too final when President Emmanuel Macron was soon saying the cathedral would be rebuilt within five years.

It is a hope shared by many that CWD will rise from the ashes of its implosion, but long before five years.

The good work it did in reading, understanding and responding to the signs of the times is a mission that should continue.

Sydney Duval is a veteran journalist and retired personal assistant to the late Archbishops Stephen Naidoo and Lawrence Henry. He served on the board of CWD for 27 years, including terms as chairperson.

Current and Past Misereor Heads Meet Up

Cycle For Those Who Can’t