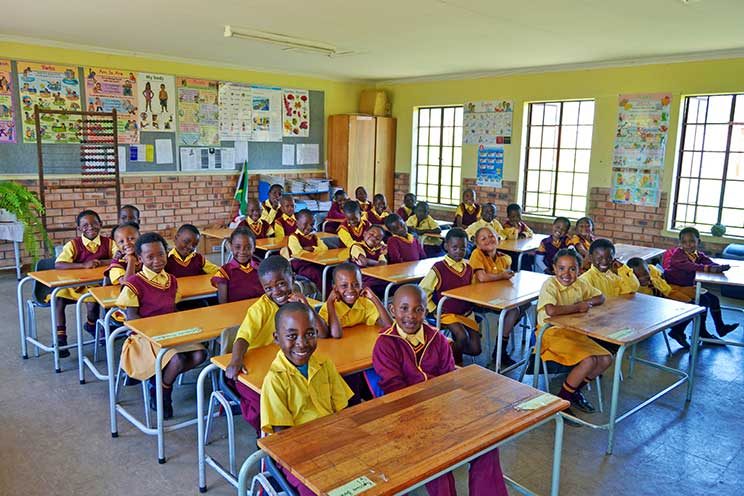 Children in a classroom. There are currently 330 Catholic schools in South Africa, most of them state-funded.

Education in South Africa faces many challenges, and the Catholic Church has a role to play in meeting them, as ANNE BAKER explains.

That all is not well in South African schools is common knowledge. Basic education minister Angela Motshekga’s task is not easy.

Provinces, while following the South African Schools Act and the policy, have a level of autonomy which often proves challenging to those working in education.

The annual jamboree around the Grade 12 results pits provinces against each other to see who attains “top” province, a meaningless measure of quality education.

About half of young people who do not complete school are left uneducated and unskilled.

The Catholic Institute of Education was invited, over the course of 2018, to several national meetings on various education topics.

The most pressing of these was a meeting on safety in schools. This came in the wake of serious violence in schools — pupil-on-pupil, teacher-on-pupil and pupil-on-teacher.

The latter seems to have galvanised the unions into action, and it is a challenging task to keep the focus on all violence and not just pupils against teachers.

A National School Safety Summit was a follow-up to two previous summits in 2015 and 2016. While commitments were made in previous summits, it has become clear that the violence in society has greatly impacted schools.

South Africa has been ranked 147th out of 162 countries for the worst levels of what is called “societal and security” violence.

A paper circulated at the summits suggests that the breakdown of the family structure has affected the shaping of beliefs, attitudes and values of children.

Migratory labour patterns and high levels of poverty have led to the disintegration of families and the diminishment or absence of the parental role in the lives of many children.

The South African Medical Journal published a study in February which showed that 99% of Sowetan children surveyed had been exposed to “extreme forms of violence”, such as gunshots in the street, bullying and violence between family members, or the rape and sexual assault of their friends.

The violence in schools has many facets. Some areas are plagued by gang violence which spills over into the schools.

Sexual harassment or gender violence is common. Some teachers sexually harass and abuse learners in their care, face little or no consequence for their actions, and leave damaged children behind.

In addition to this, some teachers continue to beat children, also with impunity. These actions greatly affect the ability of children to learn and to feel safe.

The CIE aims to establish a positive peace — not only the absence of direct violence (physical or psychological acts of aggression), but also of indirect violence (such as unjust or unequal treatment and cultural violence) — where harmony and social justice become evident.

The Child Safeguarding Policy enables Catholic schools to understand their deep obligation to protect children, while the aim of the Building Catholic Schools Programme is to equip teachers with the skills which enable schools to become places of justice and peace.

As this requires both a personal and mindset change, progress is slow, but the programme is beginning to bear fruit in those Catholic schools where it is implemented.

International and national evidence shows that permanent damage is done to children in the first 1000 days of their lives if they don’t receive appropriate care and stimulation.

Research also shows that the majority of South African children aged between 6—23 months are stunted because they are not adequately fed. Simultaneously, our children experience multiple forms of deprivation.

The lack of provision of ECD becomes, effectively, a major determinant of intergenerational poverty.

There are numerous ECD centres at parishes around the country. Many of these are outsourced to community members and are more babysitting than functional ECD centres where children receive stimulation and care.

While much has been done and much money spent on education, international benchmark tests indicate that 78% of South African Grade 4s cannot read for meaning in any language.

This means that children in the intermediate (Grades 4-7) and subsequent phases of schooling cannot read properly in order to learn. This hampers their ability to progress, not only in school but in life. It further leads to the very high school dropout rate in high school which is approximately 50%.

Pope Benedict’s 2011 apostolic exhortation Africae Munus addresses the problem thus: “Illiteracy represents one of the principal obstacles to development. It is a scourge on a par with that of the pandemics. True, it does not kill directly, but it contributes actively to the marginalisation of the person—which is a form of social death—and it blocks access to knowledge.”

The latter can be described as high levels of teacher resistance in poor schools, which researchers say can be traced back to the legacy effects of apartheid in the school system (linked to union interference).

However, this is no easy task due to bureaucratic nightmares securing accreditation.

A life skills course is central to the development of the participants. Recent research into the programme had shown that this has an impact on young people’s lives.

The Catholic Church and education

Where do these challenges leave the Catholic Church in South Africa?

Perhaps we need to tap into parishes to become resources for reading groups and after-school homework centres run by retired teachers or young unemployed volunteers in parishes.

Other ways: Actively promoting the vocation of the teacher and offering the many teachers in parishes affirmation and care. Strongly encouraging parents to participate in their children’s education—teaching them to read with their children and serving schools where possible — such as on governing bodies.

With the Church and parish communities working together for the good of others, much could be achieved for the education of the children of South Africa.

Anne Baker is the deputy director of the Catholic Institute of Education (www.cie.org.za).