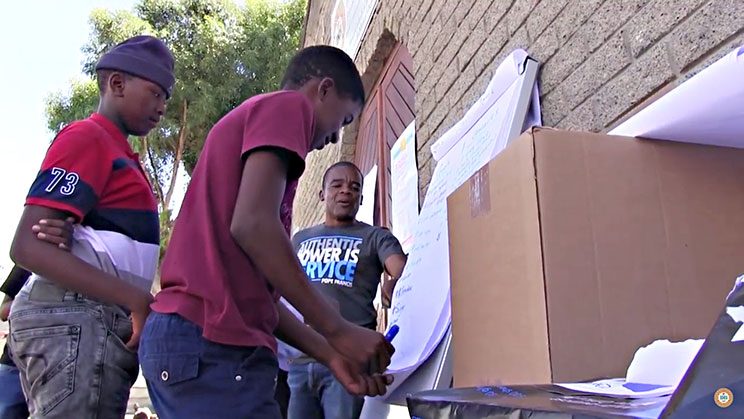 Fr Rampe Hlobo at Nyanga parish in the documentary Cape Town Exposed Beyond the Beaches, The film is freely available on YouTube.

The Jesuit Institute has launched a new documentary on people’s experience of crime in one of Cape Town’s most notorious townships.

Titled Cape Town Exposed Beyond the Beaches, the film is freely available on YouTube.

According to the Jesuit Institute, “the documentary reveals the despicable reality of the crime and desperation lived in Nyanga”.

“In stark contrast to the Cape Town known to many — as a tourists’ paradise — we wanted to highlight the inequality and the multitude of problems faced by its people.”

Fatalities due to crime in the township amount to one almost every day, making it the murder capital of South Africa.

“This revelation alone should bring politicians and our national government to act definitely and with haste,” the Jesuit Institute said.

“Sadly, it appears little is being done. The latest statistics reveal an upward trend in criminal activity in the region of almost 10% — especially in sexually-related offences and murder.”

With almost a quarter of those who live in Nyanga being between the ages of 15 and 24, “young people in the area [are] perhaps the most susceptible to crime. In many cases, it is these very young people who are the perpetrators and victims of such odious crimes,” the Jesuit Institute said.

The media team of the Johannesburg-based institute, in collaboration with the Jesuits, visited Nyanga for a week to shoot the “8-minute snapshot of daily life”, directed by Sr Katleho Khang SMJM, with contributions by Ricardo da Silva SJ and Francis Tuson SJ. The latter also composed the musical score.

In the film, Jesuit Father Matsepane Morare, former parish priest in Nyanga, notes that Nyanga “is an extraordinary violent place with a huge number of problems”—and, he adds, “it has been like this for decades”.

“This palisade-fenced area of the province encloses people as though they were caged zoo animals,” Jesuit Father Rampe Hlobo of St Mary’s church in Nyanga said.

“If one tries to abide by the law, one may just end up being a victim and a crime statistic as well,” he said on the Jesuit Institute’s website.

But the documentary also shows the flip-side to the world of crime.

“Beyond the blood-splatter and filth-lined streets, there is an incredible joy and hope among those who live there. It was encouraging to see young children playing in the parks, albeit accompanied by their parents for fear that they may be kidnapped or enticed into a life of crime by local gang lords,” the producers said.

“Nyanga residents also braai openly on the streets, sharing their food generously with one another, amid township song and sips of the finest brew from the local shebeen. The sense of community is undeniable.”

The documentary interviews mothers at St Mary’s who come together to support each other through the grief and pain of losing their children to gang violence.

One mother notes that the root cause of the crime wave is poverty.

“Young people are growing up without a sense of escaping this cycle of poverty, violence and death,” Fr Matsepane says in the documentary.

“This is not how people are supposed to live in one of the wealthiest countries in Africa,” he adds.

“The Church becomes a necessary and indispensable haven, not least for its young community members. We find ourselves journeying in solidarity with the people of Nyanga…giving hope to many, especially the young” through various programmes offered by the parish.

One student interviewed at the church noted: “No one pays attention to us”. The documentary is a response to that observation.

Cape Town Exposed Beyond the Beaches follows another recent documentary by the Jesuit Institute, Denied Access: Stories of Forced Migrants in South Africa, which is also available on YouTube.

Cape Town Exposed Beyond the Beaches can be viewed at http://youtu.be/copYrQvNWrQ