Catholics on the Army in the Townships 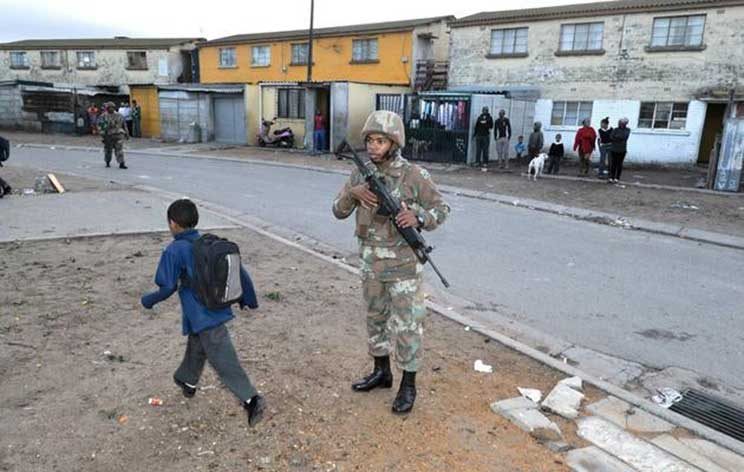 Catholic leaders in Cape Town townships are hopeful that the deployment of the army in their communities will achieve the objective of curbing gang warfare but urge that a long-term approach is still needed.

South African National Defence Force (SANDF) units were deployed in “Operation Prosper” to ten Cape Flats areas to support the police in checking the rampant gang violence which has claimed many lives in the past months.

President Cyril Ramaphosa gave the go-ahead for the SANDF deployment, which police minister Bheki Cele announced in his budget earlier this month.

Reportedly, if Operation Prosper shows success in curbing gangsterism in Cape Town, the model may be introduced to hotspots in Johannesburg and Port Elizabeth

According to unofficial estimates, more than 1900  people were murdered in the Western Cape in the six months before the army deployments.

Fr Nkululeko Meyiwa from Our Lady Queen of Africa parish in Philippi hopes that the army’s deployment will help.

“I believe the idea is to close down [gangsterism] section by section…and clean it up,” the priest said. “I’m hoping it will help because local policing is not helping.”

Fr Rampe Hlobo SJ, former parish priest of St Mary’s in Nyanga said: “There is a need for the army’s deployment as crime in the area is out of control,” the Jesuit priest said. “The police are failing to protect the people and to maintain law and order.”

He noted that law enforcement resources in Cape Town are not equally and fairly distributed.

“Bringing in the army may help in mitigating the situation, but only to a limited extent. What we need is law enforcement agencies on the ground in these areas because people are living in fear,” Fr Hlobo said.

Army deployment, he said, can be only a temporary fix. “It doesn’t solve the problem. It is not a permanent solution.”

Fr Peter-John Pearson, director at The Catholic Parliamentary Liaison Office, warned against turning the issue of gangsterism and the SANDF deployment into a party-political partisan issue.

“This is too big and destructive an issue to be made into a political point-scoring battle. People’s lives have been lost, communities have been destabilised,” Fr Pearson said, adding that “we must guard against the temptation” to make political capital of the situation.

“The problem is multi-faceted and therefore calls for an integrated response. If it’s just a matter of sending firepower in, then you’re probably going to have very limited success, especially in the long-term,” he told The Southern Cross.

“We have to take a long-term view on this; [gangsterism] is not something that has just come up now. This goes back decades and decades and is a result of spatial separation, overcrowding, poverty, and frustration—and those things need to be dealt with as well,” he said.

Fr Pearson said a solution must be found in a well-considered and integrated approach involving various sectors and roleplayers from the affected community.

Fr Jeremiah Gama OMI of St Mary Magdalene parish in Lentegeur, Mitchells Plain, said if the community feels that the soldiers are needed, then their views are the most important to consider.

“It’s easy for people to comment on whether the army being here is a good or bad thing when they are not the ones living in these crime-ridden areas. They sleep peacefully in their own homes, they are not afraid that a stray bullet will come through their window,” he said.

Stephen Selbourne, a parishioner and Catholic lay leader in Bonteheuwel, said he had long been waiting for an army deployment into his area.

“The police have lost the battle against gangsterism and people were dying daily in our townships,” Mr Selbourne said.

“We were living in fear on a daily basis and nobody was safe. Innocent people have been caught in the crossfire in this gang war; gangsters killing each other over turfs; and drug smuggling in our areas,” he said.

“There are too many people selling drugs in our areas and that is where the gangsters, hired guns, come in to protect them and own the territory—and wipe each other out.”

Mr Selbourne was confident that many people would rest easy and experience relative peace now that the army was there.

“There is a need for our people to claim back our townships and homes for the safety of our children, and at this stage, we will only be able to do this with the help of the army,” he said. “Let’s give the SANDF a chance.”

SA Church Youth Leaders Meet in May on “Christus Vivit”