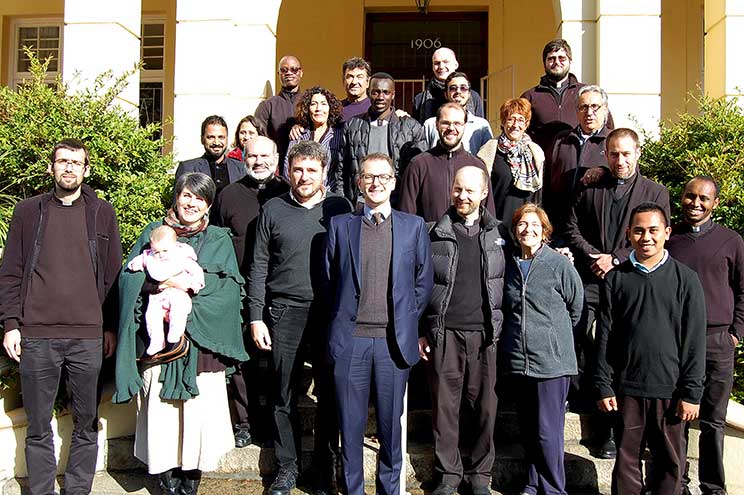 The Italian consul, Emanuele Pollio, is pictured with  seminarians, families in mission, priests and deacons of the Neocatechumenal Way at the Redemptoris Mater seminary in Rondebosch, Cape Town.

Italian consul Emanuele Pollio, visiting the Redemptoris Mater seminary of the Neocatechumenal Way in Rondebosch, Cape Town, said the seminary is important as it gives strength to new evangelisation.

The seminary is home to diocesan missionary seminarians from Nicaragua, Tanzania, Columbia, Egypt, Honduras, the Philippines, Poland, the US, India and Italy.

It has faced several challenges since it established itself in the 113-year-old former St Michael’s convent, as the building was in a state of disrepair, said Dino Furgione, who is responsible for the Neocatechecumenal Way in South Africa.

Mr Pollio, who is based in Cape Town, visited the seminary to “see the reality of the mission, entrust himself to our prayers and to offer his help”, Mr Furgione said.

“It was a beautiful meeting,” said Fr Lorenzo Ricci, a missionary priest. “The consul told us, briefly, his history and said he wanted to meet people at the seminary, to speak to them and discover their history.”

Mr Pollio told the seminarians that he comes from Sorrento, a town close to Naples, in the south of Italy. He spoke of his upbringing and of his grandfather’s brother, Mgr Gaetano Pollio, a missionary in Vietnam and China, who was abducted and tortured during the time of Mao Zedong.

The consul said he was particularly touched by the history of the families in mission who left everything behind — career, house, families and affections — to bring the Gospel in South Africa, said house rector Fr Zygmunt Kurzawinski.