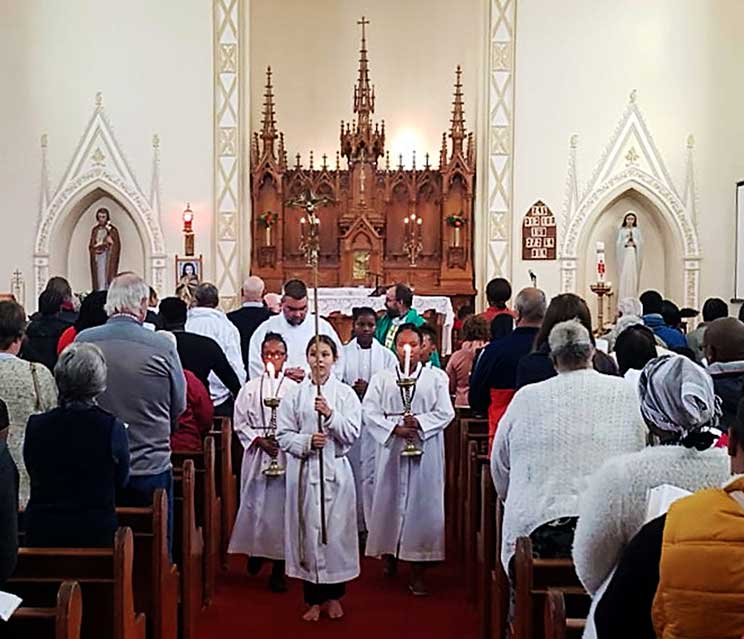 By Samantha Carolus – One of South Africa’s oldest Catholic churches celebrated its landmark 175th anniversary with a special Mass.

The Mass featured petitions and hymns in languages as diverse as isiXhosa, Afrikaans, English, Shona and Chichewa.

Established in 1838, the parish serves permanent or temporary residents, including students and scholars at the university or one of the many schools in the area.

St Patrick’s serves three other parishes: St Mary’s, St Peter Claver and St Joseph’s. Parishioners from each of these came to share in the celebrations.

The Catholic Church was established in the Eastern Cape in July 1838 upon the arrival of Bishop Raymund Griffiths, who was the first resident vicar-apostolic at the Cape of Good Hope.

The decision was made to make Grahamstown the seat of the Catholic mission.

There was no Catholic priest to attend to the Catholic soldiers of the 27th British Regiment. A Franciscan, Fr Burke, was given £100 to start a church and a school.

Fr Burke died within only a year of service. Just a few days before his death, recently-ordained Fr Murphy had arrived from Ireland to assist Fr Burke.

Fr Murphy assumed the position of leading the community and proved to be an excellent priest who maintained a close relationship with the Royal Inniskillin Fusiliers, an Irish line infantry regiment of the British Army. This helped him build the mother church of the Eastern Cape.

A grant of land was secured and Bishop Griffiths returned to lay the foundation stone on July 30, 1839.

The building has a distinctly military character and resembles the ancient Battle Abbey in Hastings, England, with its crenellations.

The actual construction of the church was undertaken by Fr Murphy and the officers and men of the Inniskillings.

Bishop Griffiths dedicated the church on July 21, I844. Soon St Patrick’s became a pro-cathedral and the seat of the new vicar-apostolic of the Eastern Cape, Bishop Aidan Devereux. His successors, Bishops Patrick Moran and James Ricards, also had their seat there.

With Grahamstown’s decline in importance, due to the economically evolving spaces, the seat of the bishop was transferred to Port Elizabeth.

In a message, Bishop Vincent Mduduzi Zungu of Port Elizabeth noted that the anniversary “reminds us that God is the Lord of history. He directs all the events of our life”.

The Church Bishop Zungu said, “is not just a static or fixed institution; it is rather a dynamic, life-giving community of believers”.

Special mention and appreciation was made for the Jesuits who had served in the Makanda community for many years, including through the now-defunct St Aiden’s College.

Bishop Zungu offered his gratitude to the many diocesan priests who had served St Patrick’s parish before the arrival of the Franciscans in January 2007.

He also noted impactful work of the Assumption Sisters who are still serving in Makanda in the fields of education and health.