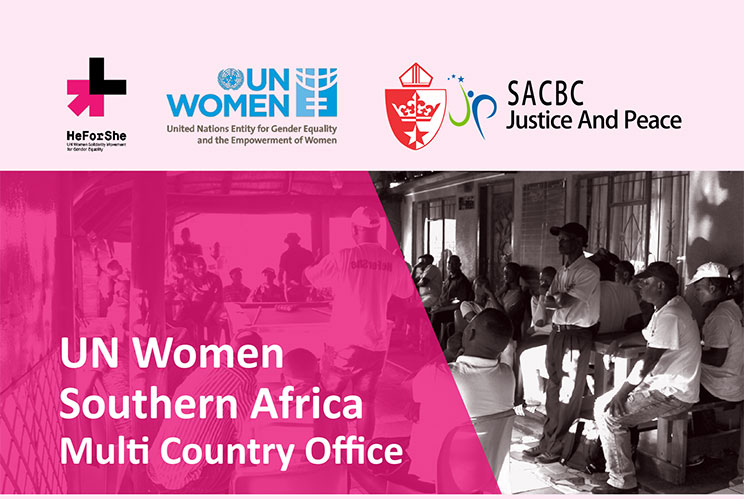 THE Tavern Project against gender-based violence which has been spearheaded by Justice & Peace in Klerksdorp diocese was one of the models showcased at the ninth South African Aids Conference, held in Durban this month.

The focus of the conference this year was on identifying the unprecedented scientific, social and digital innovations/technologies which could expand possibilities and opportunities towards controlling the HIV/Aids epidemic.

In 2015, the South African Catholic Bishops’ Conference started a partnership with the UN Women South Africa Multi-Country Office to organise community dialogues under the HeForShe banner in 144 taverns from four communities in Klerksdorp diocese: Jouberton, Tigane, Khuma and Alabama.

There are about 5000 men who regularly participate in the HeForShe monthly dialogues.

The objective is to reach out to communities, engage men, and communicate important messages advocating against gender-based violence to bring behaviour change among men.

Over the years, the community dialogues have seen an increase in participation by women.

As men have become more involved in discussions and conscientised around these issues, they have opened up spaces for women to participate in forums that had previously been closed by patriarchal attitudes and sexist behaviour.

The HeForShe project is now viewed as an inviting space for men and a safe space for women, and the community has moved on the perception that this is a project for men only.

At the conference, it was recognised that there is a close link between gender-based violence and HIV/Aids.

Further, it was recognised that it is difficult to find effective models for mobilising men on a massive scale to change behaviour and to be at the forefront of challenging other men who are involved in gender-based violence and risky behaviour on HIV/Aids.

Among the behaviour-modifying models, the Tavern Project by the Justice & Peace Commission was showcased.

Members of Justice & Peace groups in the Klerksdorp diocese, and tavern owners from the region who play a key role in the Tavern Project, offered a demonstration on how the tavern dialogues are conducted.

Last year the Tavern Project was introduced at the United Nations.

The South African Aids conference is the second-largest of its kind in the world.