What SA Cleric Told The Pope 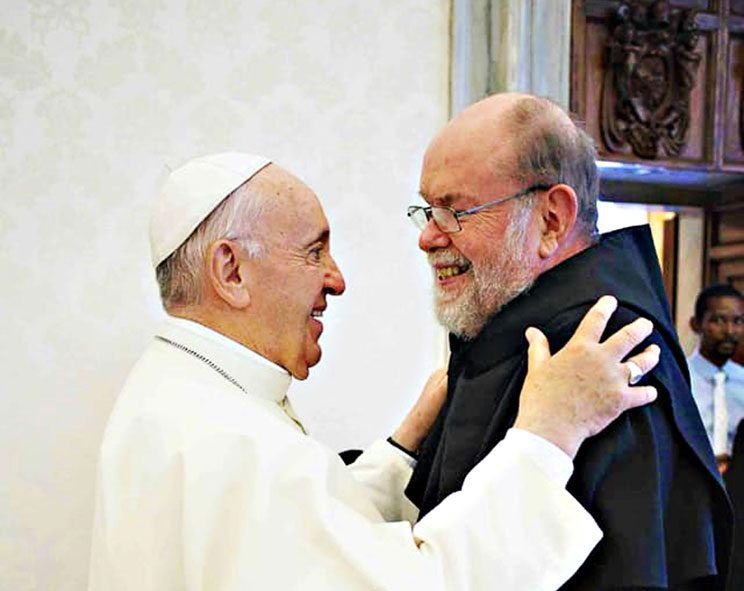 Pope Francis and Anglican Father Michael Lapsley embrace after meeting in a private audience in the Vatican.

Pope Francis prays St Thomas More’s “Prayer for Good Humour” every morning, he told a South African cleric at a private audience in the Vatican.

Anglican Father Michael Lapsley, director of the Institute for Healing of Memories (IHOM), told Pope Francis about his life journey, including the experience of receiving a letter bomb from apartheid security forces in 1990: it blew off both his hands and blinded him in the left eye.

Fr Lapsley, 70, explained how the bombing led to his work in reconciliation which eventually led to the formation of the Institute for Healing of Memories, which has spread across the world from its beginnings in South Africa.

Pope Francis was visibly moved by his story, a statement from the institute said.

Fr Lapsley expressed his appreciation for the role of the pope in today’s world, especially in the way he acknowledges the pain of the human family and always insists on mercy, compassion and solidarity, particularly towards the most disadvantaged and excluded people, the statement said.

He pointed out the two most common narratives in healing of memories workshops worldwide are gender-based violence (including both domestic and sexual violence) and childhood trauma. Pope Francis was nodding in recognition.

The New Zealand-born cleric told the pope that he is serving not only as canon for healing and reconciliation at Cape Town’s Anglican St George’s cathedral but occupies the same role for the Anglican cathedral of Edmonton, Canada.

He noted that Anglican Bishop Jane Alexander of Edmonton had written several times to the pope, asking him to visit Canada and issue an apology for the abuse by religious personnel in the residential schools over many years.

Pope Francis responded that there were already plans for such a visit in the Vatican pipeline.

Fr Lapsley told the pope that indigenous peoples across the world are seeking the Catholic Church’s explicit revocation of the Doctrine of Discovery, which was used by European monarchies as of the 15th century to legitimise their colonisation of lands outside Europe. It was issued in Pope Alexander VI’s papal bull Inter Caetera in 1493.

Referring to Pope Francis’ visit to Mozambique in September, Fr Lapsley referred to two issues that are obstacles to the healing of the nation: the abuses by Frelimo, the dominant political party in Mozambique, notably the execution of some of its members, including a Catholic priest, Fr Mateus Pinho Gwenjere, in the 1970s.

Fr Michael gave Pope Francis a book on the life of Fr Gwenjere, written by Lawe Laweki, who sent two personal messages to the Holy Father.

Fr Lapsley also explained to Pope Francis that even after 44 years since independence, many Mozambicans still associate the Catholic Church with the colonial power, Portugal.

Referring to the desire of the IHOM to upscale its work across the world, Fr Lapsley asked Pope Francis for ways of obtaining further support from Catholic Church bodies. Pope Francis made a number of suggestions, which have not been released to the public.

Fr Lapsley praised Pope Francis’ chastisement of leaders of the oil industry in a meeting the previous day for their ongoing commitment to the exploitation of fossil resources and its damaging impact on our common home. 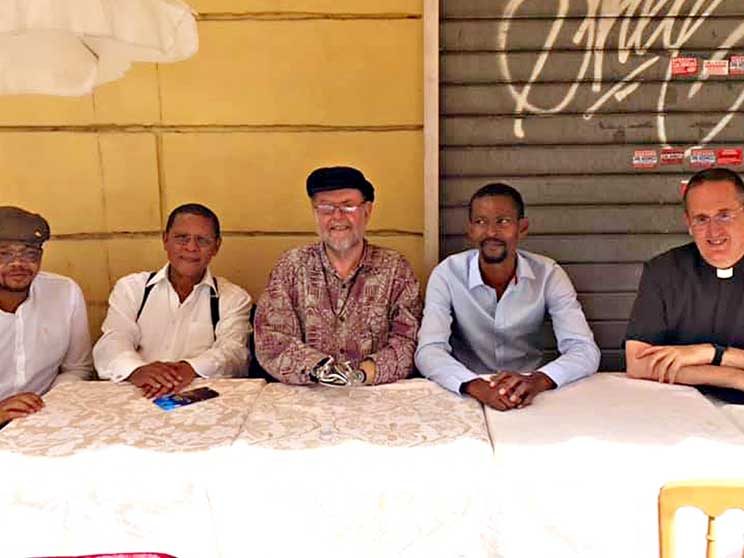 Anglican Father Michael Lapsley (centre) after his audience with Pope Francis in Rome with (from left) Fr Tulani Gubula of Queenstown diocese, who studies in Rome; South Africa’s ambassador to the Holy See George Johannes; Philani Dlamini of Durban, who was part of Fr Lapsley’s delegation; and Fr Simon Donnelly of Johannesburg, who works in the Vatican’s secretariat of state.

The pope smiled broadly as he explained he had just boxed the captains of the oil industry gently on the ears.

The audience also had its lighter moments, with Pope Francis and Fr Lapsley enjoying their shared sense of humour.

The pope said that a sense of humour is probably the closest thing to the grace of God. He added that every day he prays St Thomas More’s “Prayer for Good Humour” (“Grant me, O Lord, good digestion, and also something to digest…”).

Fr Lapsley told Pope Francis that he could have brought several thousand people with him for the audience, including his Facebook friends, many of whom were greeting him.

The pope smiled, and waved his arms about as he said that there was plenty of space to bring all of them.

He greeted Fr Lapsley’s friends back.

The audience was facilitated by George Johannes, South Africa’s ambassador to the Holy See.

Mr Johannes said the meeting between Pope Francis and Fr Lapsley was “like two long-lost brothers, embracing and patting each other on the back”.

“Both were very excited to see each other,” the ambassador told The Southern Cross from Rome.

During the audience, the pope was “very reflective and also keen to learn about the injuries which Fr Lapsley suffered in the bomb attack”.

Mr Johannes believed that it is because Pope Francis comes from a country with a troubled past, Argentina, that Fr Lapsley’s work of healing and reconciliation resonated with him.

“They will probably meet again,” he predicted.

Mr Johannes said he hopes that the meeting will have a spinoff of encouraging a papal visit to South Africa, something which, he added, would require a lot of preparation and cooperation between the government and the Holy See.

“We have been a bit neglected” by the popes,” he said, adding that “Pope Francis is aware of people saying, ‘How about South Africa for a change?’”