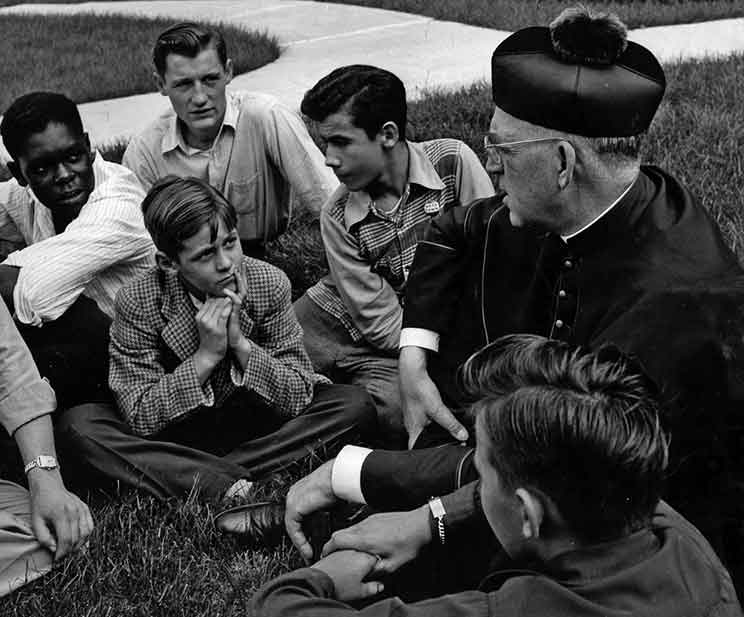 Father Edward Flanagan, the Irish-born priest who founded Boys Town in Nebraska, talks with a group of boys in this undated photo. The effort to have Father Flanagan canonised took a step forward with the presentation of the “positio” to the Vatican Congregation for Saints’ Causes, along with a letter of support from Archbishop George J. Lucas of Omaha, Neb. (CNS photo/courtesy Boys Town)

The sainthood cause of Father Edward J. Flanagan, founder of Boy’s Town, took a step forward with the presentation of the “positio” to the Vatican Congregation for Saints’ Causes, along with a letter of support from Omaha Archbishop George J. Lucas.

The “positio,” or official position paper, is a summary of the volumes of records that were sent to the Vatican by the Archdiocese of Omaha in 2015 and makes the argument that Father Flanagan demonstrated heroic virtue in his life, and thus worthy of being declared venerable by the pope.

Archbishop Lucas met with Cardinal Giovanni Angelo Becciu, prefect of the congregation, to personally endorse this step toward the eventual beatification and canonization of Father Flanagan, the founder of Boys Town.

“It has been a privilege to offer my support for the cause of Father Edward Flanagan at each stage of this process,” Archbishop Lucas said in a statement. “I was able to share with Cardinal Becciu the encouragement offered to all of us in the church during this challenging time by the virtuous life and work of Father Flanagan.”

The Father Flanagan League Society of Devotion is what is officially known as the “actors” for Father Flanagan’s cause for canonization. The league has devotees of this cause in 20 countries and has over 40,000 worldwide followers on Facebook.

“On behalf of the league, we thank Archbishop Lucas for making this personal commitment to launch the review of the ‘positio,'” said Steven Wolf, president of the Father Flanagan League. “The archbishop’s visit to the Vatican speaks volumes to the importance of this cause for the Catholic Church.”

When the Irish-born priest’s cause was officially opened in 2011, he was given the title of “servant of God.” The next step was the collection of documents about his life and ministry and the gathering of testimony gathered from dozens of witnesses who knew of his ministry. This is the material submitted to the Vatican in 2015 and now presented to the Congregation for Saints’ Causes.

If the case for Father Flanagan’s heroic virtue is upheld through the three stages, the congregation then would make a recommendation to Pope Francis that Father Flanagan should be declared “venerable.”

In general, two approved miracles attributed to the intercession of the candidate are needed for sainthood – one for beatification and the second for canonisation.