The Army in the Streets 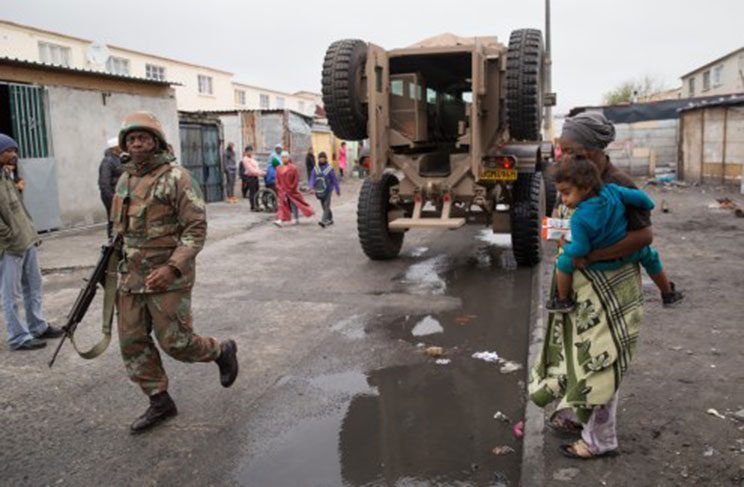 When the time comes to measure the success of the deployment in Cape Town of the South African National Defence Force in combating the rampant gangsterism in the city’s townships, we will need to listen closely to the experience of the affected communities.

Within the communities themselves there is no clear consensus about the desirability of having the army on their streets. Indeed, that deployment was a last-straw act which the government was rightly hesitant to enact.

For many people in these communities, the presence of the army evokes the memory of apartheid troops on their streets, guns raised in defence of a brutal oppressive regime. That trauma persists.

But this is a new day. The army is no longer pitted against people of good will but against the tyrannical regime of the gangs and the druglords. The army and the people face a mutual enemy.

There are fair arguments against the deployment of the army, such as the militarisation of law enforcement; the potential for crime deterrence violating the rights of innocent people; the unhappy experience of similar operations in other countries, and so on.

These objections must be taken seriously. But, as Fr Jeremiah Gama OMI counsels in our report this week, we must take our first cue from the communities which have suffered under the yoke of gang crime. Initial sentiments in the communities seem to suggest a more or less cautious welcome. With gangsters taking flight, many people have reported a sense of peace not known for a very long time.

Initial sentiments in the communities seem to suggest a more or less cautious welcome. With gangsters taking flight, many people have reported a sense of peace not known for a very long time.

But the exile of the gangsters will likely be short-lived. What will happen when the troops withdraw?

The temporary presence of the army in gang-infested areas of a city will not solve a reality that resides on layers of deep-rooted problems.

The army cannot solve the systemic problems within the police and its distribution which makes effective law enforcement, anti-crime measures and the protection of the public in those communities impossible. The army cannot overhaul a judicial system that lacks the capacity to handle overwhelming volumes of criminal cases.

The army cannot solve the problem of poverty and unemployment which feeds crime and gangsterism. The army cannot fix a broken education system which leaves young people with few career choices outside crime.

And the army cannot repair the lasting legacy of the forced removals which destroyed communities and created many of the ghettos which our soldiers are now asked to patrol. The army cannot sustain community projects that provide an alternative to crime. The army cannot upgrade public infrastructure, including housing.

If we are serious about addressing the anarchy in which so many South Africans live, then we must confront the history that created these realities — and how deplorably, pathetically little has been done by successive local, provincial and national governments to address these legacies.

In Cape Town, where half a century ago the apartheid regime killed off the District Six community, the destruction of communities continues under the dictatorship of property development and free-market gentrification which forces long-standing residents to the city’s periphery.

Where communities are given protection, as occurred lately in the Bo-Kaap, it follows coordinated protests. And will that protection be anything more than a stay of execution? Long after the army has left the townships of Cape Town, these and so many other problems that cause the gang culture will remain.

Long after the army has left the townships of Cape Town, these and so many other problems that cause the gang culture will remain.

Fr Peter-John Pearson suggests in our report that there is a need for a concerted and integrated approach to combat not just crime itself but also its causes. Does the political will for that exist?

The presence of the army on the streets may well succeed in suppressing crime. It may ameliorate an unbearable situation. Perhaps it will even crush crime syndicates (though power vacuums will always be filled again).

If “Operation Prosper” in Cape Town succeeds, the government is considering repeating the exercise in Johannesburg and Port Elizabeth.

We must hope that the experience of the Cape Flats will defy due scepticism and give those communities hope.

But the flip-side must also cause us concern: What will be if the SANDF, the mightiest legitimate force in the land, should fail to stop the gangs?