A ‘Hangover’ After My Ordination 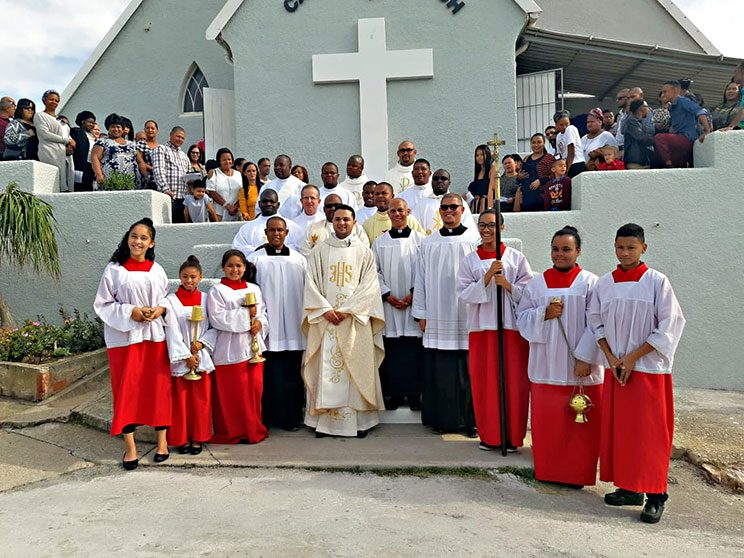 Fr Runaine Radine with family, clergy and community after his Thanksgiving Mass following his ordination to the priesthood in Schauderville, Port Elizabeth.

For the past year or so, there have been moments of great joy in the lives of us 15 young men, who completed their formation at St John Vianney Seminary in May 2018.

News about diaconate and, later, priestly ordinations, sparked a range of mixed emotions and shared excitement.

I am still on something of a “spiritual hangover” following my own ordination to the priesthood three months ago.

Often I think back to that magnificent day and catch myself smiling with contentment as well as a degree of disbelief, overwhelmed as I am by its mystery.

I count my priesthood as one of the greatest blessings and most fragile gifts of my life, not only for myself, but for my family, friends and the community of St James parish in Schauderville, Port Elizabeth.

Priestly ordination is a community celebration. The candidate, as is the local custom, is presented to the Church by and with the support of his family. As I sat at the foot of the sanctuary throughout the readings at the Mass of Ordination, waiting to be called by the deacon, this was particularly evident—my family, especially my mother and grandmother, sat right behind me, supportively.

What is more, the community came out to support a young man — not unlike one gathered around a family sending off a bride to be married to some groom from another village and vice versa.

For me, the people gathered for the ceremony represented different phases in my life’s journey up to this point: childhood, schooling, youth, young adulthood and seminary — the strangers with whom I became friends and enjoyed deep bonds of affection and respect over the years; a family that I got to choose.

Afterwards, either directly to me or through social media platforms, many of them shared their own experience of being a part of the ceremony; they related how it had been a blessing to witness such a moving ritual, rich in symbolism.

Many of us from the Class of 2018 have been blessed to be able to attend the ordinations of our classmates. Most of those who attended my own ordination are priests themselves now.

We have reminisced about these experiences of travelling to different dioceses around the country for the various ordinations, in places we never imagined we would ever see in our beautiful South Africa.

At the seminary, over seven or eight years, we grew together in formation, and now we got to know where we all came from.

We even got to know the silly childhood stories that marked our growing up in families and communities which, despite our embarrassed protestations, continue to be told with glee and amusement.

We finally got to meet the families of our brothers, who felt like our own loved ones by extension.

And even though the rite of ordination is the same everywhere, we have learnt of the unique ways in which individual communities mark the occasion as a whole.

A sense of brotherhood was awakened in the newly-ordained transitional deacons and priests. We felt welcomed by older priests wherever we went and it was a lovely reunion with those whom we knew at the seminary who were ordained in the preceding years. It made the laying on of hands and the exchange of peace during the ordination a sign of true solidarity.

And now, as our own ordination season comes to a close, another one begins, as the St John Vianney Seminary class of 2019 is called by the Lord from the community and for the community.

Fr Runaine Radine is a priest of the diocese of Port Elizabeth.