Fake Priests: What We Can Do 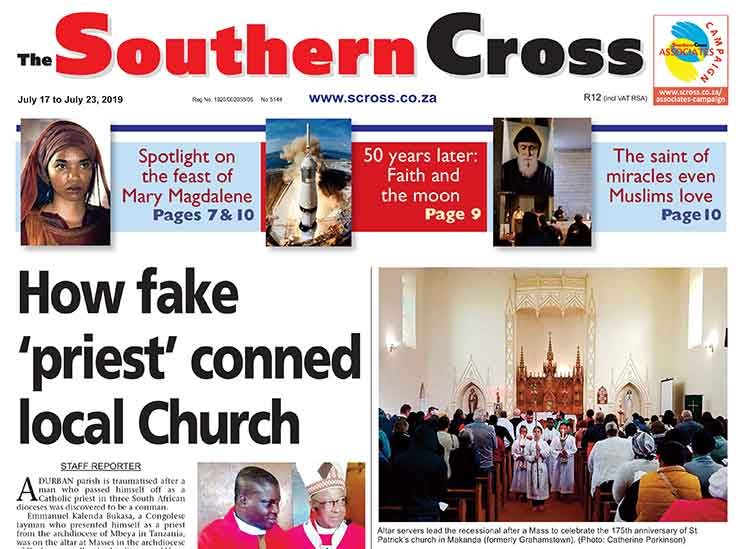 The front-page of The Southern Cross in which we reported on fake priest Emmanuel Kalenda Bukasa. In his article, Fr Chris Chatteris SJ offers some advice about how to spot fake priests and religious, and what to do about them.

There was much shock, horror and trauma over the case of the imposter priest in Durban. This is not an isolated case: in fact, it happens quite regularly. So, what to do?

Firstly, we can remind ourselves of some basic missiology. Every Christian apostle is, by definition, one who is sent. The sender is the Lord himself and the commission is given through the Church. There is no such thing as an apostle who is on his or her own, privatised mission.

In the case of priests and religious, the Lord’s sending is done through the one appointed to send and supervise them — either a bishop or a superior.

Hence, if someone purporting to be a priest or religious were to turn up at the door of the seminary where I work and offer to join the staff—even if they were carrying a piece of paper to prove who they are — my first question would be why we had not been contacted by their superior.

In fact, experience has taught that anyone who simply turns up in a diocese or at the door of an institution offering their priestly or religious services, is almost certainly going to turn out to be a crook.

Next, a bit of useful Church history. The monastic orders have long known of the danger of the gyrovague, the wandering “monk” who goes from monastery to monastery, taking advantage of the community’s hospitality.

Such people were and are disturbed, disaffected or plain con-artists. They have no missionary mandate; they have often long cut ties with their superiors; they are out of control and on the make.

Notice that I have not distinguished between validly ordained/vowed people and imposters. I think one of the reasons why the imposters can get away with their act is that we are not really surprised by the arrival of “arbitraries” at our door. We just think that, oh dear, here is another of those ecclesiastical drifters.

Hence, if we dealt more firmly with the validly ordained and vowed gyrovagues, then the bogus ones would have less “camouflage”. But we don’t. We tolerate them to the detriment of the People of God who end up being exploited and confused.

So, one of the reasons why people pass themselves off as priests and religious is simply that they can, and we in the institutional Church make it easier for them.

Another blindingly obvious reason why we have bogus priests and religious conning the Church is money.

Why do people impersonate doctors? Because it pays, and rather well. For the bogus priest or religious, the rewards might not be quite that of a doctor, but let’s face it, the person in the cassock or habit must be one of the few people in society upon whom people will sometimes spontaneously press cash simply because of who they are.

Here, priests and religious, especially priests I think, need to examine their consciences and ask to what extent we have encouraged this. What is our public image? Do we come across as frugal and simple? Is our lifestyle a temptation to the con-artist?

Finally, they do it because of the gratifying sense of power that it gives.

We priests seem often to put ourselves on the theological and institutional pedestal that I thought the Gospel warns us to resist.

Clericalism is back, or perhaps it never really went away. So, not only does it pay financially to posture as a priest, but one can also preen oneself up there on the hierarchical high ground!

These then are my recommendations.

This is not an onerous task. It took me two or three clicks to find the contact information for Mbeya diocese, where the Durban imposter said he was from.

If the civil law can be invoked, invoke it. For example, was the man who said he was from Mbeya in the country legally?