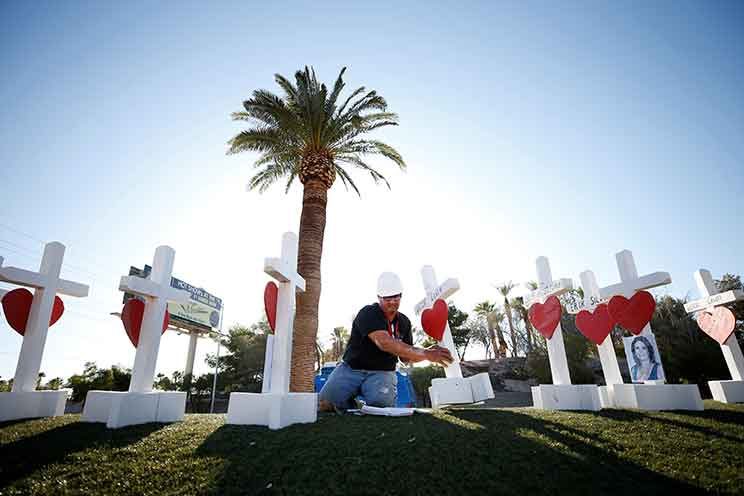 Greg Zanis of Aurora, Ill., works on one of the 58 white crosses he set up Oct. 5, 2017, for the victims of the Route 91 music festival mass shooting in Las Vegas. Zanis has delivered free of charge more than 26,000 wooden memorials at the site of mass murders and other tragedies across the U.S. (CNS photo/Chris Wattie, Reuters)

When both mass shootings and single shootings are added together, everyday on average 100 Americans are killed with guns and hundreds more are shot and injured.

When compared to other wealthy nations and many low-income countries, the U.S.’s rate of gun violence is far greater.

While common sense gun control laws like universal background checks and gun registration, as well as banning the sale of semi-automatic weapons would certainly help stem this epidemic, the problem runs far deeper than reasonable legislation can adequately address.

The U.S., as well as so much of the world, is addicted to the evil of violence.

And then there are the many other cruel realities that human beings suffer from, that at first glance may not appear violent-related, but, in truth inflict grave violence to the human dignity of countless brothers and sisters. Among these cruel realities are closed borders to desperate migrants and refugees, hunger, poverty, homelessness, people lacking clean water/sanitation/medical care, abandoned orphans, forgotten elderly, human trafficking and child labour.

Dare we not forget there are two other evil categories of violence which are threatening the very existence of life on earth: the ominous reality of nuclear weapons – with the very real possibility of nuclear war anytime, and the unfolding catastrophic violence to our common home – the earth – caused principally by human-induced climate change.

Both of these looming dangers have led the prestigious Bulletin of the Atomic Scientists to report that their Doomsday Clock is perilously still at 2 minutes to midnight.

In the words of Pope Francis we need to create a “culture of encounter” with all people – even our enemies.

“But to you who hear I say, love your enemies, do good to those who hate you, bless those who curse you, pray for those who mistreat you. … Do to others as you would have them do to you,” said Jesus.

Violence is not the way of Jesus. This is indisputable!

The late preeminent theologian and biblical scholar, Fr John McKenzie said, “If Jesus does not reject violence for any reason, we do not know anything about Jesus. Jesus taught us not how to kill but how to die.”

So, following the example of the non-violent Jesus, let us teach, preach, work and pray to root out violence in ourselves, governments, corporations, schools, cultures and even in our church – e.g. the “just-war” theory.