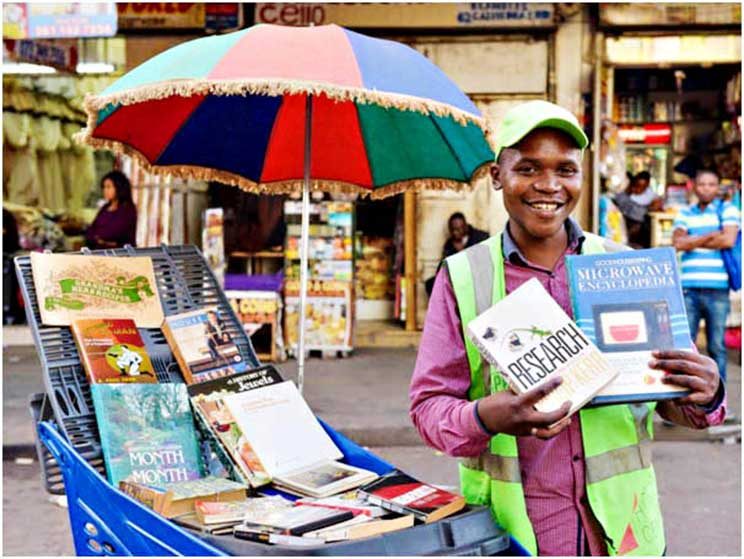 First a project turned beggars into newspaper vendors; a year later it has turned  homeless people into sellers of secondhand books — and the Paper Money project of Durban’s Denis Hurley Centre (DHC) is now receiving national recognition for its initiative.

“Most homeless people want to work and be financially independent in a dignified way. Begging or stealing are not the preferred options,” said the centre’s director, Raymond Perrier.

“We have ten regular sellers who make enough money — on average R2 000 per month — to get off the streets and into shelters or even their own rooms,” he said.

Mr Perrier said a number of venues around Durban have been supportive—the ICC, Playhouse, KZNPO, festivals, churches and malls—but, he added, “we know we could empower more sellers if we had more venues”.

The project now plans to scale up by creating mobile bookshops in specially adapted shopping trollies.

“Our booksellers could get to many more places and offer quality well-priced books to the many thousands of people who want to read but cannot afford new books. We submitted our plan to the South African Breweries Foundation Social Innovation Awards and were thrilled to be chosen as one of the 20 finalists out of 2000 applicants,” he said.

The Paper Money project was recently presented in a “Dragon’s Den” set-up alongside innovations from other parts of the country.

The project has to wait for a few weeks to find out the results, but Mr Perrier said they have already learnt a lot from preparing their submission and from the two-day business skills workshop that preceded the pitch.

The team comprised Mr Perrier and Stuart Talbot, as well as two of the best booksellers, Pat Khumalo and Richard Nzima (featured recently in the DHC’s Homeless 101 exhibit).

“You can imagine the look on their faces when these two guys who had been sleeping on the streets were shown their rooms at the Sandton Hilton,” Mr Perrier said.

Offers for venues to host a seller can be directed to Stuart Talbot at stuart@denishurleycentre.org

Denis Hurley Centre’s Homeless Tell Their Own Stories On Film

Mission Without Borders To Reach Out At Christmas
Share