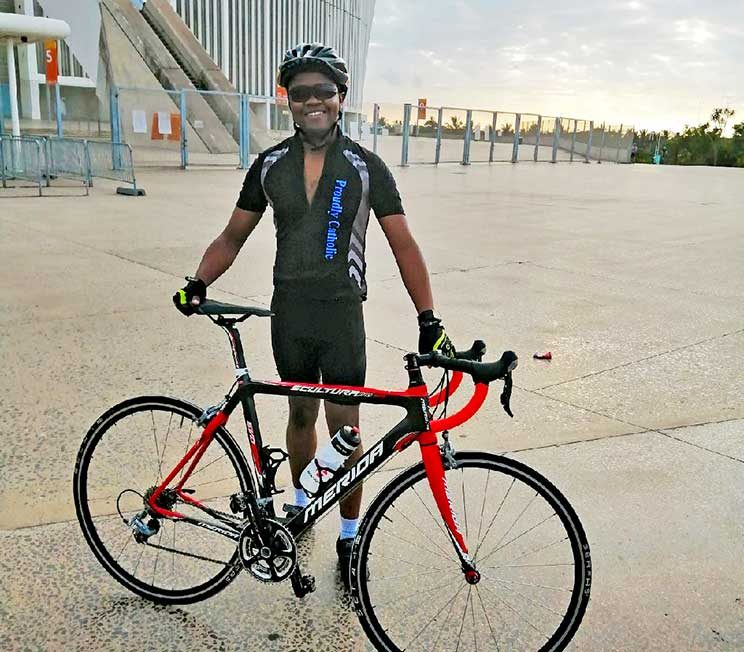 Br John Nhlanhla Mhlanga OMI, who is calling fellow cyclists in the Amashova Durban Classic to join him in raising funds for learners.

An Oblate theologian will hit the asphalt on his bicycle in October to raise funds for the community outreach programme of St Josephs’s Theological Institute (SJTI) in Cedara, KwaZulu-Natal.

Br Mhlanga began taking part in cycle races last year; the Amashova 2019 will be his fourth and perhaps most difficult race yet.

Br Mhlanga is the financial administrator and a lecturer in moral theology at St Joseph’s Theological Institute. He is also a formator for the Oblate students who are training for the priesthood or preparing for ministry as Oblate Brothers at the institute.

“We realised the need to engage with the Church and society by providing, firstly a space for such engagement, and secondly programmes through which we can reach out to the community,” Br Mhlanga said.

“The idea of building a multipurpose facility—which we have come to refer to as the Engagement Hub—was born, and we began thinking of immediate ways to engage the community,” he said.

Recently Br Mhlanga was told that some students from the local combined school had been hit by a train while taking a short cut because they stayed far and could not afford transport fare.

“This was very tragic and heartbreaking. The one lingering question was, what can I do to help? It was then that I thought I would cycle for a cause.”

The SJTI Amashova 2019 is meant to raise funds for the support of school children from the local school in Sbongumbomvu.

Support will be threefold:

An online fundraising platform has been set up.

“We hope that in the weeks leading to the Amashova 2019 on October 20, we will get more funds coming in,” Br Mhlanga said, adding that the students who will be the initial group of beneficiaries have already been identified.

Cyclists who are willing to participate in the Amashova 2019 to raise funds for St Joseph’s can be part of the online campaign. They will be wearing St Joseph’s cycling jerseys that will have at the back written, “I am cycling for [name of student]”.

“We want to impact the lives of real people with real stories who are living in situations of real need and we can offer them real hope and a real chance of a better future,” said Br Mhlanga.

The back of his cycling jersey will sport the slogan, “I am cycling for Sthabile”.

Sthabile is a young grade 12 student who cannot make it to school all the time because of transport problems.

“A testimonial from one of her teachers says that she is one of the best students in her year class. Such a student needs all the help she can get and there are many more out there like Sthabile,” said Br Mhlanga.