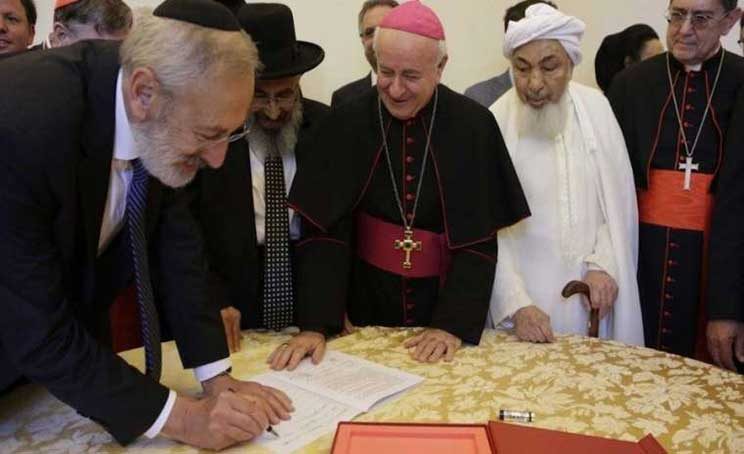 By Carol Glatz – Representatives from the Catholic and Orthodox churches and the Muslim and Jewish faiths signed a joint declaration at the Vatican reaffirming each religion’s clear opposition to euthanasia and physician-assisted suicide.

They also encouraged promoting palliative care so that dying patients could receive the best, most comprehensive physical, emotional, social, religious and spiritual care and appropriate support for their families, according to the joint statement.

Pope Francis met with the signatories, who presented him with a copy of the declaration they signed a few hours earlier at a Vatican ceremony. The signatories included representatives from the Vatican, the Ecumenical Patriarchate of Constantinople, the Patriarchate of Moscow and All Russia, Muslim and Jewish scholars and leaders.

The declaration, titled, “Position paper of the Abrahamic monotheistic religions on matters concerning the end of life,” was prepared by the Pontifical Academy for Life.

Because of wide debate and discussion in society concerning end-of-life issues and policies, the aim of the joint statement was to clearly present the positions of the monotheistic faiths concerning “the values and practices relevant to the dying patient,” their families, health-care providers and policymakers who belong to one of these religions, it said.

The faith leaders, it said, share “common goals and are in complete agreement in their approach to end-of-life situations,” affirming that:

– Euthanasia and physician-assisted suicide are “inherently and consequentially morally and religiously wrong and should be forbidden with no exceptions. Any pressure upon dying patients to end their lives by active and deliberate actions is categorically rejected.”

– “No health care provider should be coerced or pressured to either directly or indirectly assist in the deliberate and intentional death of a patient through assisted suicide or any form of euthanasia, especially when it is against the religious beliefs of the provider,” and as such, conscientious objection “should be respected.”

– “We encourage and support validated and professional palliative care everywhere and for everyone. Even when efforts to continue staving off death seems unreasonably burdensome, we are morally and religiously duty-bound to provide comfort, effective pain and symptoms relief, companionship, care and spiritual assistance to the dying patient and to her/his family.

– “We commend laws and policies that protect the rights and the dignity of the dying patient, in order to avoid euthanasia and promote palliative care.”

The joint statement said communities must help patients so that any fear of being a burden does not lead to their believing they are useless or have a life with no value or dignity, but rather they see they do deserve care and support until their life’s natural end.

The declaration called upon all policymakers and health care providers to familiarize themselves with the position paper and the perspectives and teachings of the three monotheistic faiths in order to help provide “the best care to dying patients and to their families who adhere to the religious norms and guidance of their respective religious traditions.”

“We are committed to involving the other religions and all people of goodwill,” as well, it said.

The idea for a joint declaration had been proposed to the pope by Rabbi Avraham Steinberg, an Israeli medical ethics expert, paediatric neurologist and member of the Pontifical Academy for Life. Appointed in 2017 by Pope Francis, Rabbis Steinberg and Fernando Szlajen of Argentina were the first rabbis ever invited to be members of the papal academy.