Miss SA: ‘Use Your Voice To Benefit Others’ 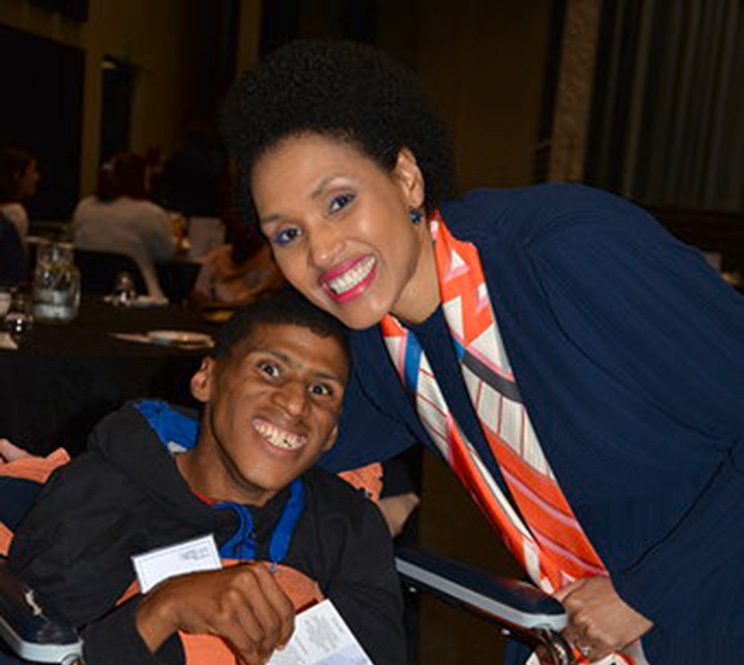 Former Miss South Africa Peggy-Sue Khumalo, now chief executive of Standard Bank Wealth SA, was the keynote speaker at this year’s Domitilla and Danny Hyams Memorial Lecture hosted by the Little Eden Society. Ms Khumalo, seen with a Little Eden resident, said those who had been given much were called on to give much back.

By Daluxolo Moloantoa – To those whom much is given, much is required. This was the message delivered by former Miss SA Peggy-Sue Khumalo in her keynote address at the third annual Domitilla and Danny Hyams Memorial Lecture held by the Little Eden Society.

In attendance at the lecture in the Bishop Shanahan Hall at Holy Rosary School in Edenvale, Johannesburg, was Archbishop Buti Tlhagale, a former guest speaker.

Before the main address, the evening’s MC, media personality Ed Jordan, called on Fr Deneys Williamson to give a brief update on the sainthood cause for Domitilla Rota Hyams, founder of Little Eden. Fr Williamson, the episcopal delegate for the cause, noted that a nihil obstat, a declaration of no objection to the cause, had been received from the Congregation of the Cause of Saints for Domitilla; one is still being awaited for her husband Danny.

Delivering her address, themed “Paying It Forward”, Ms Khumalo recalled how her first encounter with former president Nelson Mandela changed the trajectory of her life beyond her reign as Miss SA in 1996.

She told of how, a day after winning the beauty contest, she visited Mr Mandela at his home in Houghton, Johannesburg. Ms Khumalo, who is the current chief executive officer of Standard Bank Wealth SA, and a long-time ambassador of Little Eden Society, related that she told Mr Mandela of her wish to pursue tertiary education and a career in the banking sector.

“As a reigning Miss SA, Mr Mandela would invite me on various local and overseas trips to attend functions and state-related events,”  she pointed out. “It was on one of these trips that he introduced me to Mr [Stephen] Koseff, the then-chief executive officer of Investec Bank. Mr Mandela told Mr Koseff about my intentions.

Ms Khumalo revealed how being the first in her family to obtain a university degree transformed both her and her family’s fortunes. She had taken Mr Mandela’s example of “Paying It Forward”, and made it a part of her life too.

Ms Khumalo also spoke about how her husband Xolani Gwala’s battle with colon cancer compels her to speak out publicly about the need for early detection of the disease.

She said public platforms, such as the Domitilla and Danny Hyams Memorial Lecture, can play a critical role in driving public debate about issues around disability in South African society today.

“It is for those of us who have been afforded a voice to use it to society’s benefit,” she said.