Getting Close To Lourdes’ St Bernadette 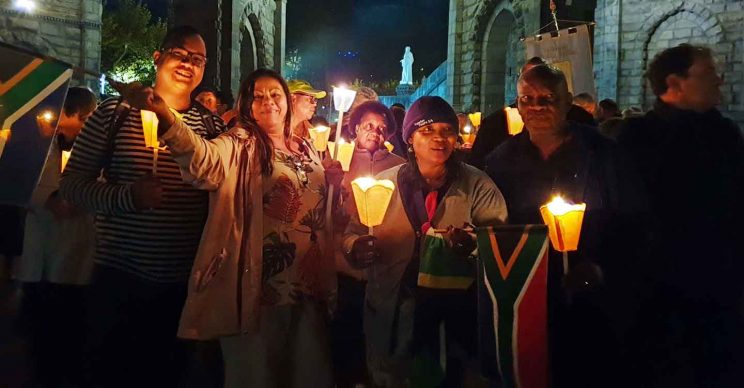 Southern Cross pilgrims at the beginning of the nightly candlelight rosary procession in Lourdes.

In October a group of Southern Cross pilgrims travelled through Catholic France, and visited Lourdes, where St Bernadette saw Our Lady, and Nevers, where Bernadette died. GÜNTHER SIMMERMACHER looks back at two inspiring visits.

Our group stood at Montparnasse station in Paris, having missed our train to Lourdes by a minute — literally — due to a long flight delay from Rome.

One might expect this to be a point of crisis when a group of wary pilgrims stand with their luggage in the middle of a train station. But, remarkably, everybody was serene, even light-hearted, about it.

As tour director Giorgio and I scrambled to organise new tickets — at no cost to the pilgrims — for the next train to Lourdes, the pilgrims from all over South Africa bonded.

When I’m asked why I enjoy leading pilgrimages, as I have done for almost 20 years now, that is a big reason why: pilgrims are special people. And often, I learn from them.

We got to Lourdes on the express train, and after a late supper, some of us went to the sanctuary where Our Lady appeared to St Bernadette (whose 175th anniversary of birth was this year).

The sanctuary, only 250m from our hotel, was empty, but the basilicas of the Holy Rosary and Immaculate Conception, the grotto of the apparition and the beautiful statue of Our Lady that dominates the main plaza were still lit up. The quiet, the nocturnal lighting and the holiness of this place inspired good prayer.

During the day the sanctuary is busy, though not in a way that forces pilgrims to jostle. There is plenty of space even on busy days. But on some days, the queues for the baths especially can be long. Our group was lucky. Everybody who wanted to dip in those cold waters from the miraculous spring had an opportunity to do so. 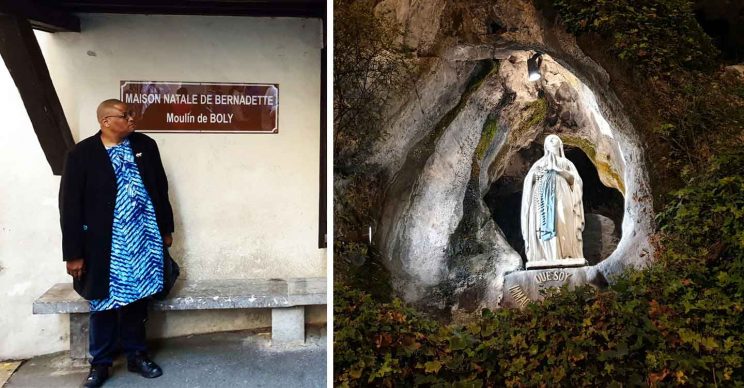 Fr Lawrence Mduduzi Ndlovu outside Boly Mill, the building in Lourdes where St Bernadette Soubirous was born • The statue of Our Lady of Lourdes in the cave where she appeared to St Bernadette. (All photos: Günther Simmermacher)

Lourdes is the world’s third-biggest site of Marian pilgrimage, after Guadalupe in Mexico and Aparecida in Brazil. So this little town near the Spanish border in south-western France exists on tourism — so much so that in off-season, most shops and hotels shut their doors.

The many shops sell the same repertoire of tat, with no guarantee of quality. One shop near the sanctuary boasts that English, German, Spanish and Italian is spoken there. When I returned a faulty item I had bought there, the manager pretended to speak only French. It took a stern word to remind him of the advertised polyglot attributes which he had flaunted just 15 minutes earlier.

Lately, pilgrims have been warned of rotating gangs of pickpockets in the town. It’s surprising that the petty criminals have cottoned on to Lourdes only now. As in almost any place where there are tourists, one must exercise basic, common-sense care.

The sanctuary itself is not infested with the commercialism of the town. The air there is sanctified.

Focus on Our Lady

The focus in the sanctuary is very much on Our Lady. The girl who saw her, St Bernadette Soubirous, very much plays a secondary role.

There is an uninspiring church dedicated to her. It was built on the spot across the river where St Bernadette stood during the 18th and final apparition on July 18, 1858, when the authorities had closed off the area in front of the Massabielle — the outcrop of rock where the previous apparitions had taken place — to discourage devotions. There is also a St Bernadette museum, which explains the apparitions and the young saint’s background in some detail.

I would suggest that it is better to read up on all that before coming to Lourdes, or at least to watch the classic film The Song of Bernadette, for which Jennifer Jones won an Oscar in 1944, and which was based on a book by a Jewish refugee, Franz Werfel (the movie is available in high definition on YouTube).

Helpfully, the museum has a model of Lourdes as it looked at the time of the apparitions.

The two principal buildings of St Bernadette’s life can still be visited: Boly Mill, where she was born and lived with her family until penury forced them to live in  tiny accommodation in La Cachot, a converted jail which was not good enough for habitation by criminals.

The popular narrative tends to present Bernadette as a bit of a simpleton. It is an unfair characterisation. To be sure, she was no Descartes  or Pascal, and her thoughts weren’t marked by great complexity, but her reputed backwardness probably had to do more with a lack of educational opportunity due to illness and poverty than with an innate stupidity.

In any case, what Bernadette lacked in intellect she compensated for with her faith, kindness, honesty, humility and determination, even when she was variously interrogated, mocked, scorned and mistreated.

Bernadette was not versed in the finer points of diplomacy. She could be brutally honest. When the artist who sculpted the statue of Our Lady of Lourdes, based on Bernadette’s description, presented the finished artwork to her, she said: “It’s not her.” 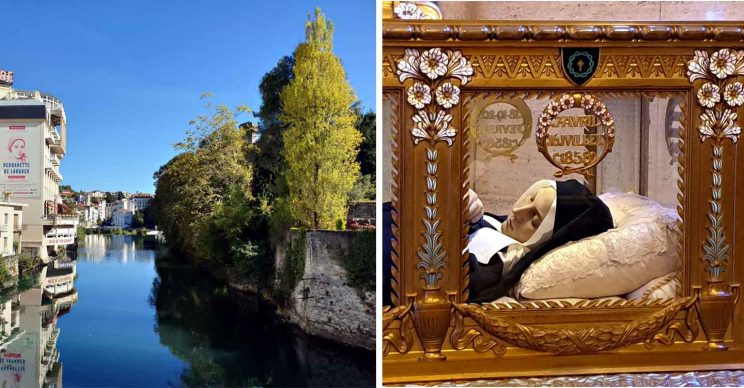 The Gave de Pau river that flows through Lourdes. The big placard on the building advertises a musical about St Bernadette • The incorrupt body of St Bernadette in her tomb in the convent chapel in Nevers, which is 700km from Lourdes

There are two stories about Bernadette which I find particularly appealing.

The first concerns one of the many encounters she had with Fr Peyramale, the local priest who was at first highly sceptical of her reports of the apparitions (wisely so).

He certainly was irritated when Bernadette reported that this impertinent apparition wanted a chapel to be built for her.

The girl never named her apparition as the Blessed Virgin Mary, only as “aquero”, a local dialect term which can be loosely interpreted as “that of which I’m speaking”. Of course, it was clear who aquero was. The priest later came to accept St Bernadette’s reports as true and took the girl under his protection.

But Fr Peyramale was still a sceptic when St Bernadette came to report another apparition of aquero. The priest was most impatient with her and hustled her out of his presbytery. Before she left, St Bernadette turned around and told the abbé: “She still wants the chapel.”

With Our Lady at our side, we can challenge the powerful.

The other story takes us to Nevers and the St Gildard Convent of the Sisters of Charity, which St Bernadette was finally allowed to enter in 1866, at the age of 22.

When she came to Nevers, about 700km from Lourdes, Sr Marie-Bernard (as she was now called) was treated harshly. She was the subject of jealousy, and her superiors were keen to cut her down to size in case the already famous visionary might get ideas of being a celebrity.

Her novice mistress, Sr Marie-Thérèse Vauzou, didn’t believe in Bernadette’s claims, and found her “vain and simple”. She later admitted to a certain fondness for Bernadette, but asked that any move to canonise her old charge be delayed until after her death, which was in late 1905.

So the young woman who had been favoured by Our Lady was given lowly cleaning jobs, before she rose up the ranks to take charge of the infirmary. Her lifelong health problems didn’t add any glamour to her presence.

One day a young novice arrived at Nevers. Of course, the young woman was aware of who lived in that convent, so naturally she asked which of the Sisters was Bernadette. When the visionary was pointed out to her, the young Sr Bernard Dalias looked down on the diminutive Bernadette and dismissively exclaimed: “Not that!”

Amazingly, from this grew a very close friendship which lasted until the day Bernadette departed from this world, on April 16, 1879.

Bernadette’s body was first interred in the chapel of St Joseph in the peaceful grounds of St Gildard’s convent. Since then, her body has been exhumed three times. Every time, it was found to be incorrupt. After the final exhumation and before relocation to the chapel, wax imprints of her face and hands were made, to cover the blackened skin.

St Bernadette now rests in a glass casket in the convent chapel, where our group had Mass.

Much as the Sisters of Charity of Nevers did all they could to downplay St Bernadette and the apparitions during her lifetime — wisely so, but not always with the greatest charity — their convent is now all about her.

The public area is called “Espace Bernadette” (Bernadette’s Area). There is even a recreation of the grotto in Lourdes, with a piece of rock from the spot on which the Blessed Virgin stood. Remarkably, it was built, in 1884, at the directive of Sr Marie-Thérèse, Bernadette’s sceptical novice mistress.

In the large and refreshingly unmanicured gardens of the convent grounds, pilgrims can do the stations of Bernadette, to learn about her convent life and reflect on her spirituality.

There is a remarkable coda to the story of St Bernadette.

The two principal men in her life were her father François, and her mentor, Fr Peyramale.

The priest died on September 8, 1877, the feast of Our Lady’s nativity. François died on December 8, 1871, the feast of the Immaculate Conception — the name by which the Blessed Virgin revealed herself to Bernadette.

Next week: The Sacred Heart of Jesus