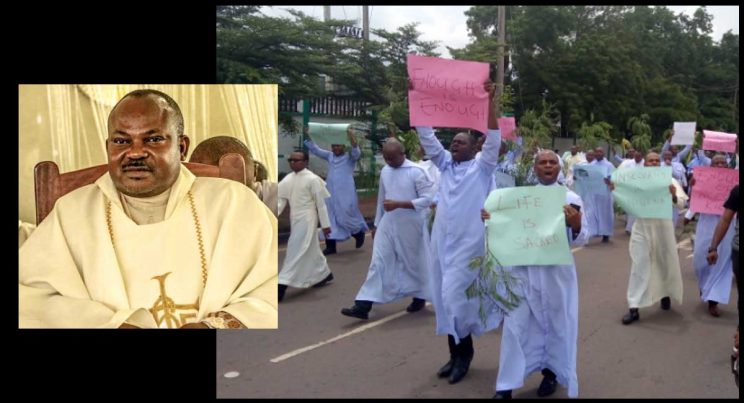 Killings have spread in most of Nigeria’s regions, originating from the nation’s northern part, since the emergence of the terrorism of the Islamic Boko Haram sect.

Alarmingly, in certain regions people no longer see murder as an unusual occurrence. But the killing of clergymen used to be the least common of these acts in Nigeria—until recently.

This year alone, at least ten priests have lost their lives in Nigeria in their service to humanity and God.

Most recently (as I write), on August 29, Fr David Tanko was killed by gunmen while on his way to a peace meeting with fellow priests on how to resolve a communal crisis in Taraba state.

After he was killed, his dead body and car were set alight.

It began in January 2019 with the killings of two priests, along with parishioners, by Fulani herdsmen during an early morning Mass.

In March, Fr Clement Ugwu was shot and abducted at his parish within farming communities in south-east Nigeria. A few days later, Fr Ugwu’s decomposing corpse was found a few kilometres from his church.

In April, Fr Jerry, a visiting priest to a parish around Anambra, also in south-eastern Nigeria, was murdered. He was hung on a tree to make it look like a suicide.

The popular, peace-seeking and God-sent Fr Paul Offu was murdered in a gruesome fashion on August 4.

He was loved by his fellow priests as a mentor, a friend and a spiritual father to many in the south-east of Nigeria.

His death provoked public protest by thousands of priests around the city of Enugu. Nothing like it had been seen before. The priests marched through the streets of the city and to the local government to register their protest with the governor of Enugu State, Ifeanyi Ugwuanyi.

People were so shocked at the priests’ reactions that it raised attention all over the nation. (Watch a video of the protest at youtu.be/5vbj0b9GCPQ)

“Nobody is safe now; we are no longer safe,” said Bishop Callistus Onaga of Enugu at the Requiem Mass for Fr Offu.

“We should always pray for peace of our people and land because we are not the only ones affected. We seem to be living in a state of anarchy, total breakdown of law and order,” the bishop said.

As a result of the priests’ protests, the US-based Africa Faith and Justice Network met with the Nigerian government to call for an immediate end to the escalating killings of the clergy.

Meanwhile, solutions to the frequent unresolved killings in Nigeria are nowhere in sight. In the first quarter of 2019 alone, according to police statistics, more than 1000 people were killed and 685 others were kidnapped across the country.

Nigerian churches have a tradition of praying for peace in Nigeria. Every Sunday, during the post-Communion rites, many parishes say a “Prayer for Nigeria in Distress”, asking for peace and security in the country.

Pray for Nigeria and her Christians…