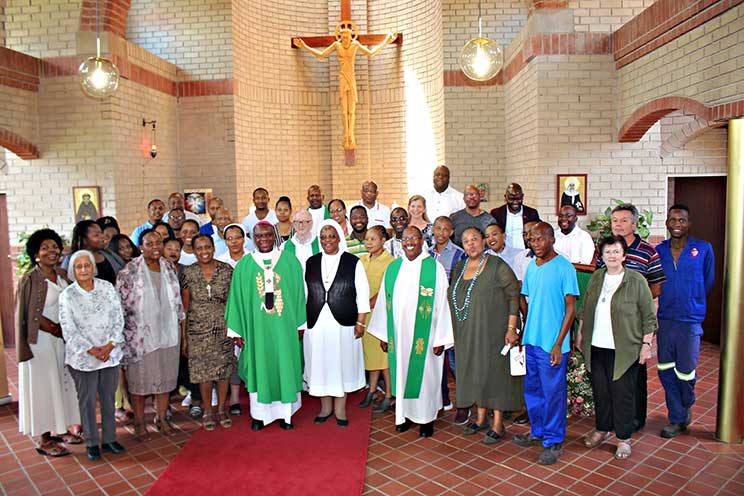 Visiting the new Khanya House in Waterkloof for the first time were Archbishop Dabula Mpako of Pretoria and, on the following day, Southern Cross editor Günther Simmermacher.

Archbishop Mpako, first SACBC vice-president and since June archbishop of Pretoria, emphasised that though born in the Eastern Cape and previously head of Queenstown diocese, he has spent most of his life in Pretoria.

He said he’d done his seminary training and priestly work there before Queenstown. “Now I am back in Pretoria; Pretoria is my home,” the former vicar-general of the archdiocese said.

Archbishop Mpako celebrated Mass for the staff in the Khanya House chapel.

In his homily he said we all have to choose between grace and sin: “The choice of sin brings death and the choice of grace life. If we choose Christ we choose life, but if our choice is on the side of sin, we choose to become slaves.”

Meeting staff members, Mr Simmermacher encouraged them to use The Southern Cross to tell the story of their work.

“The faithful don’t know much about the marvellous work done by the various departments of the SACBC, and those stories need to be known,” he said.

“Even I have been surprised by the huge extent of the work of departments like the Aids Office,” he said. “The SACBC has a significant impact in our society—and the Church has to tell that story.”

Mr Simmermacher compared the pastoral setting of the new Khanya House to the previous head office in Pretoria’s CBD.

“The Waterkloof premises have light and warmth, whereas the previous premises were dark and cold—and loud.”

The new Khanya House is set amid “the little Vatican”. Its neighbours are St John Vianney Seminary, Nazareth House, and the archbishop’s residence.

The nunciature is a short drive up the road, and St Pius X parish is also nearby.