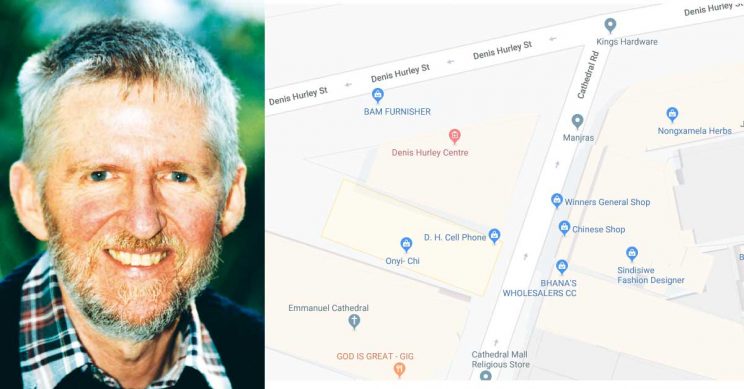 The late Paddy Kearney, founder of the Denis Hurley Centre and former director of the Diakonia Council of Churches, will have Cathedral Mall, a pedestrianised walkthrough in Durban, renamed in his honour.

The honour marks the first anniversary of his sudden death on November 23 last year.

Paddy Kearney Way runs alongside the Denis Hurley Centre and is next to Denis Hurley Street, named for Mr Kearney’s mentor.

“It is a fitting location since it connects Emmanuel cathedral and the Grey Street mosque — and Paddy did so much in his life to promote social cohesion and bring together people of different faiths,” said Raymond Perrier, director of the Denis Hurley Centre.

According to Mr Perrier, Mr Kearney himself had been keen to have Cathedral Mall renamed, though not after himself.

“He was frustrated that it was called a ‘mall’, since most people associate that now with a covered shopping mall,” Mr Perrier explained.

The death of Mr Kearney prompted an outpouring of tributes from across the board in KwaZulu-Natal. He was praised not only by religious and community but also by political leaders.

One of the proposed ways of honouring him was the renaming of Cathedral Mall in his honour.

The proposal received support from all the main local stakeholders including Cardinal Wilfrid Napier and Emmanuel cathedral, Juma Masjid for the Muslim community, Gandhi Development and Memorial Trusts and MK Gandhi Library for the Hindu community, and Victoria Street/Early Morning Market for the business community.

The unveiling of Paddy Kearney Way will take place on Saturday, November 23. All are welcome.

What The Church’s New Pastoral Plan Is All About
Share