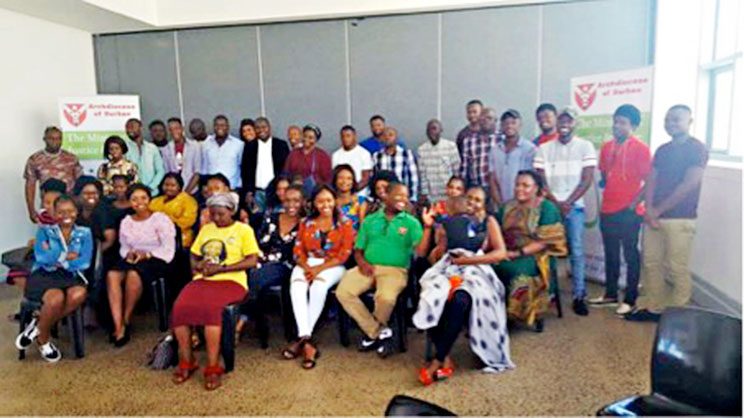 The Justice & Peace Commission and the Commission for Refugees and Migrants hosted a workshop to help foreign nationals and South Africans to engage and improve understanding of each other.

The Justice & Peace Commission (J&P), with the help of the Commission for Refugees and Migrants, hosted a workshop on social cohesion to create a space for foreign nationals and South Africans to help to engage and improve understanding of each other.

The recent unrest in Pretoria, around Johannesburg, and in the Durban area, spurred J&P to organise a workshop which saw 66 men and women from South Africa, Burundi, Zimbabwe, Malawi, the DRC, Congo and Kenya participating.

The objective of the workshop was to dispel rumours and misconceptions regarding foreign nationals, and help them live as fellow Africans within South Africa.

The workshop established that most foreign nationals fleeing war-torn countries ravaged by political intolerance prefer South Africa to other African countries because they see it as a safe haven and economically strong.

Many also see it as a united African country, owing to its stability, beauty and popularity.

Foreigners added that even xenophobic attacks are nothing compared to the civil wars in their own countries.

They said they work here to survive and send the little they get to their families back home.

South African workshop participants expressed that they feel threatened by the influx of foreigners.

They said that cybercrimes have escalated due to some foreign nationals being involved, that their sisters are forced into prostitution by Nigerian pimps and are easily trafficked, and that those who are undocumented cannot be traced if they commit crimes.

They also spoke of the non-compliance of some foreign-owned shops, which don’t pay VAT or any form of tax; and the selling of fake merchandise, which affects the South African economy.

Local participants did, however, have positive things to say about foreigners too, among them that they have business skills that can be used to train South Africans.

They also felt that the government should allow children of foreign nationals born in the republic to enter public schools regardless of their parents’ nationality.

“The workshop taught me that most South Africans don’t seem to understand the pain and suffering some foreign nationals endure in their countries,” he said.

Mr Senyane added that most foreigners claimed it was easy to buy your way in at South African borders due to corrupt local army and police officials.

He also pointed out that foreign nationals make up 3% of South Africa’s population, and that it cannot be said that crime has gone up since their arrival.

J&P, the participants, and the Refugees and Migrants Commission of archdiocese of Durban therefore collectively recommended that  the Department of Home Affairs fast-track asylum seeker permits, that together they find an alternative to deal with undocumented foreign nationals humanely, and that skilled foreign nationals be engaged in training local unemployed youth.

The group also recommended that priests participate in men’s ministries, and that the Church run more workshops to dispel myths about foreign nationals among locals.