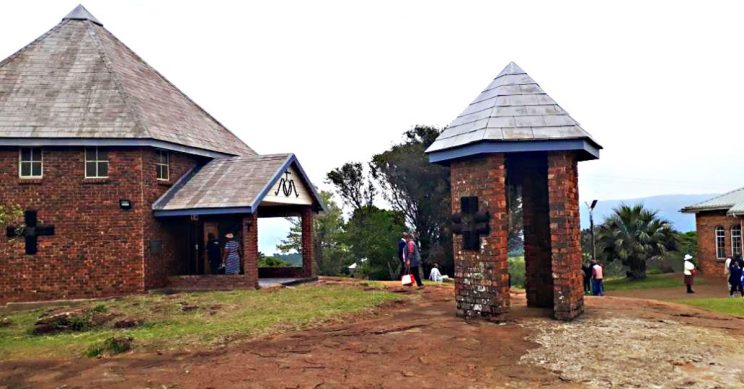 It took a gruelling trip across South Africa to get to Ngome, but once there, Angela Botha felt the illumination of a holy site.

Sometimes a pilgrimage is a journey of faith as well as an adventure. So it was recently when my husband Paul and I set off on the long journey across South Africa, from Cape Town to Ngome.

From our experience, we recommend that one make that trip in a 4×4 or a bus. But as we set off, the idea of traversing such a long stretch of road in a Ford Focus was not daunting, and we eagerly anticipated our arrival in the lush highlands of northern Zululand.

More of our adventurous journey there later. Let me state upfront that I cannot recommend more highly the pilgrimage and the joy of being in such a spiritually uplifting atmosphere as at Ngome.

The Ngome shrine, dedicated to Our Lady, the Tabernacle of the Most High, is located in the diocese of Eshowe, about 330km north of Durban and 85km east of Vryheid.

It is the site that marks German Benedictine Sister Reinolda May’s apparitions of Our Lady between 1955 and 1971.

The shrine has 18 full-time staff, six of them Benedictine and Franciscan Sisters.

There seemed to be ten priests, led by the rector, Fr Wayne Weldschidt OMI, who see to the smooth running of schedules.

As a musician Fr Weldschidt performs in church; his other talent is handling exorcisms on the grass outside the shrine’s Church on the Rocks.

Our accommodation at Ngome Farm Lodge was very basic, but it was in a lovely setting. Other types of rooms, nicer than ours, are available, and there are dormitories sleeping 95 people.

Hundreds and hundreds of people are arriving day and night. Visitors from Europe come in the summer, and other visitors from Africa are continually arriving.

There are grottos of Our Lady erected around the farm. It is quite impersonal: no one is looking out for visitors during their stay there, and it is up to you to find your way around.

I was a customer at the repository, which is so very popular yet understocked. Other than this, there are no other shops, such as for food and beverages.

I attended Mass on both days we were at Ngome. At the first one I sobbed when the Zulu men in the congregation sang in their basso profundo, or baritone voices, completely unrehearsed, natural harmonies.

There were eight priests in attendance at that Mass, and five at Sundays Mass, which included a blessing of the artifacts and holy water from the springs.

One of the main reasons that I was so keen to find the seven springs at Ngome was that these healing waters really do work: my brother was cured of cancer because of them.

Pilgrims are allowed to collect water and have it blessed in the church. But reaching the seven springs is difficult, involving a very steep and tiring climb.

I had heard ten years ago about the sun at Ngome: its bright red and orange rays. On YouTube there is a video called “The Dancing Sun of Ngome”.

It recalls the Miracle of the Sun in Fatima in 1917, witnessed by at least 75000 people. It is depicted on the wall of the altar in the main church at Ngome. 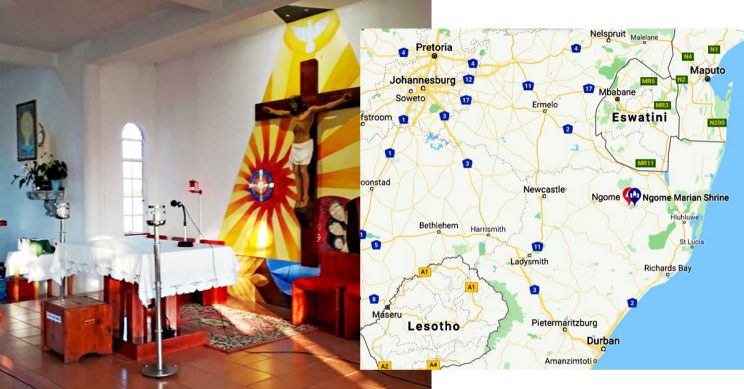 The history of Ngome is beautiful. Originally, in 1944, this farm was owned by the Benedictines and there were a few cattle on it. Now the neighbours of the shrine are Jacob Zuma’s Nkandla complex and King Goodwill Zwelithini’s Royal Palace at Pethu.

That lovely German nun, Sr Reinolda, had ten visions where Our Lady spoke to her, starting in August 1955, with a final apparition in May 1971.

Mary appeared as a Living Monstrance and asked to be called the “Tabernacle of the Most High”.

The Blessed Virgin stated that she wished a shrine to be built in a place where the seven streams come together—pointing to an empty area.

Sr Reinolda identified the springs two years later at Ngome, and the shrine was erected.

Born in 1901 in south-west Germany, Sr Reinolda arrived in this area in 1925 as a missionary and was much loved by the community.

She studied midwifery in Pietermaritzburg, and during her 38 years of tutelage at the Benedictine Mission Hospital, more than 28000 babies were born.

Many of them were in mortal danger, so she performed numerous emergency baptisms.

Sr Reinolda kept meticulous records and was very popular with the people who nicknamed her “Mashiyane”, on account of her bushy eyebrows.

Although Mary had appeared to Sr Reinolda, Bishop Aurelian Bilgeri (a Benedictine himself) did not encourage devotion to these apparitions. In 1966 he allowed a small chapel to be built. When he died in 1973, his successor, Bishop Mansuet Biyase, allowed construction of the bigger chapel.

Devout pilgrims had been arriving at Ngome since 1961. In 1992 Ngome shrine was declared “a place of prayer”. Rome has not yet approved the apparitions, and Sr Reinolda is not a saint.

And with all this to look forward to, we left Cape Town on the feast of the Guardian Angels. I was confident, after all the well-wishing that we were given; and after having driven for nine hours on the first day, my husband Paul was optimistic about his well-planned route for Friday.

We had been warned not to drive at night. If we were unfortunate enough not to reach Ngome, we were instructed to retire before dark and find shelter.

Zululand’s roads are in a state of total neglect, with potholes, dongas, rocks and—most difficult of all—2000 untended roaming animals to contend with. But it was only when a youth threw a rock at our car that the sense of danger penetrated.

There are other hazards as well. Killing an animal in an accident involves long negotiations with the local chief and payment of at least R1000 cash.

Un-signposted towns were our downfall.

Paul had driven all morning and we were on track to reach Ngome in time for Mass at 15:00. This is when the devil stepped in and we had a huge spiritual battle.

We were heading for Ulundi. For two-and-a-half hours on a dirt track we concentrated on finding the freeway to this town.

We passed thousands of houses, towns without names, and gradually our road became more and more insignificant until it ended in a dead end.

I must admit that I felt scared for my life. Paul took out his cellphone. No signal.

I reached into my handbag for my Rosary and said a decade. With that, a construction truck full of workers came into view.

Paul asked the driver for instructions to the “tarmac road”. He gave us precise directions.

Paul was absolutely determined to find Ngome. Now there was a detour in the road and the sun started sinking. I was fed up so said that we must move off the road and book into a room in Ulundi. Paul didn’t answer me but stopped to ask locals for directions. They only spoke isiZulu.

Out came the rosary—six times. Each time the local beamed at the sight and immediately recognised what destination we were after. The only problem was that, due to the language barrier, the directions were incoherent to us.

The only sign that we understood was made with hands by two different people, and it was the one for “perpendicular mountain”.

With only this fact to go on, my stalwart Paul cheerfully headed on and on. When we arrived at a steep mountain, I wasn’t hopeful.

The car lurched over the summit and we were presented with the most wonderful sight: an exuberant sun welcomed us, even though we were three hours and nine minutes late!

I bowed my head in reverence.

We had at last arrived after a 12-hour journey on that day alone, and one of 1680 km altogether.

The large blue and white sign indicating the shrine was very evident. Hallelujah!

And Paul’s eye and knee did heal, and my wheezing did diminish.